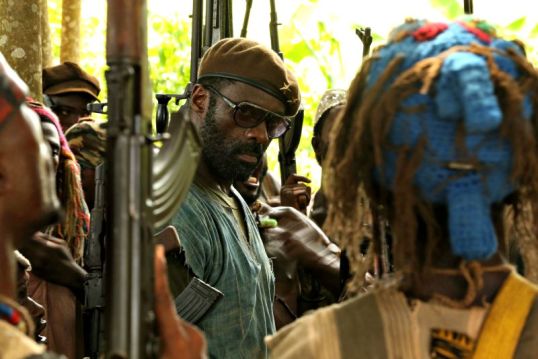 Netflix has had some recent success with creating their own content with such critically-acclaimed shows such as House of Cards, Orange Is the New Black and, most recently, with Daredevil. As their success continue they’ve now begun to create their own content in the full feature-length film area.

One such film is the adaptation of the 2005 novel Beasts of No Nation by Uzodinma Iweala. It’s about the story of the young boy, Agu, who is forced to join a rebel group in some unnamed West African nation to become a child soldier. The book, and the film, will allow us to witness his journey from innocent child to a young child-soldier who sees and participates in wartime atrocities.

Beasts of No Nation stars young actor Abraham Attah in the role of Agu with Idris Elba taking on the role of the sadistic and manipulative Commandant. It also marks the follow-up project for Cary Joji Fukunaga whose most recent work was the first season of a little series on HBO called True Detective.

Beasts of No Nation premieres simultaneously on Netflix and a limited amount of small and independent theaters on October 16, 2015.

Here’s the trailer for Let Me Make You A Martyr, an upcoming crime film that has been getting a lot of attention because it features Marilyn Manson as a hit man.

I’m not sure how I feel about this trailer.  I like the visual atmosphere and it’s look like the film uses Manson to good effect.  At the same time, that droning voice over gets on my nerves.

I’ll be looking forward to discovering whether Let Me Make You A Martyr is another Cold In July or another Paperboy.

TWO ON A GUILLOTINE was one of those movies that used to air frequently on Boston’s Channel 56. I’d seen it numerous times, and had largely forgotten about it when TCM aired it recently. I wondered how it held up after all those decades so, good little film blogger that I am, I DVR’d it to review. While it’s certainly no classic, TWO ON A GUILLOTINE isn’t as bad as the title would imply.

The movie’s about a famous stage magician, The Great Duquense aka Duke (Cesar Romero), who passes away. The papers say he “vows to return from the grave”. His estranged daughter Cassie (Connie Stevens) shows up at the funeral. She’s a dead ringer for her mom, who mysteriously vanished twenty years ago. Duke’s will is read (at the Hollywood Bowl, no less), and Cassie is set to inherit his estate if she’ll stay at his home for seven days…

Over on Through the Shattered Lens Presidents the Oscars, Jedadiah Leland and I have been reimagining Oscar history, one year at a time! Today, we take a look at 1916, the year of Thomas H. Ince, Civilization, and Intolerance!

In the long history of the Academy of Motion Picture Arts and Sciences, 1916 was dominated by one man: Thomas H. Ince.

Today, Ince is a largely forgotten figure and his many accomplishments have been overshadowed by the mysterious and potentially sordid circumstances of his death in 1924.  However, in 1916, Ince was one of the most popular figures working in the film industry.  He was the first producer to build his own studio in California and, with D.W. Griffith and Academy President Mack Sennett, founded the Triangle Motion Picture Company.  When, following the 2nd Academy Awards ceremony, Sennett announced the he would not be running for a second term as president of the AMPAS, Ince was the obvious choice to replace him.

As President, Ince immediately launched a recruiting drive to bring more industry professionals into the organization…