What’s an Insomnia File? You know how some times you just can’t get any sleep and, at about three in the morning, you’ll find yourself watching whatever you can find on cable or Netflix? This feature is all about those insomnia-inspired discoveries!

If you were having trouble getting to sleep last night around 12 midnight, you could have turned over to the Cinemax and watched the 1993 thriller, Malice.  And then you could have spent the next few hours trying to figure out what you just watched.

Seriously, there’s a lot going on in Malice.  The screenplay is credited to Aaron Sorkin and Scott Frank and while it has enough overly arch dialogue and untrustworthy women to plainly identify it as being a product of Sorkin’s imagination, it’s also filled with a mini-series worth of incidents and subplots and random characters.  This is also one of those films where no one can simply answer a question with a “yes” or a “no.”  Instead, it’s one of those movies where everyone gets a monologue, giving the proceedings a rather theatrical feel.  It’s the type of thing that David Mamet could have pulled off.  (Check out The Spanish Prisoner for proof.)  Harold Becker, however, was a far more conventionally-minded director and he often seems to be at a loss with what to do with all of the film’s Sorkinisms (and, to be fair, Frankisms as well).

The film starts out as a thriller, with a serial rapist stalking a college campus and Prof. Andy Safian (Bill Pullman) becoming an unlikely suspect.  Then it turns into a domestic drama as Andy and his wife, Tracy (Nicole Kidman), talk about starting a family.  Then Andy meets a brilliant surgeon named Jed Hill (Alec Baldwin) and the film turns into a roommate from Hell story after Jed moves in with them.  Then it becomes a medical drama after a mistake by Dr. Hill leaves Tracy unable to have children.  Then it returns briefly to the campus rapist story before then turning into a modern-day noir as Andy discovers that Tracy has secrets of her own.  (Whenever one watches a film written by Aaron Sorkin, you can practically hear him whispering, “Women are not to be trusted….” in the background.)  Even as you try to keep up with the plot, you find yourself distracted by all of the cameos.   George C. Scott glowers as Jed’s mentor.  Anne Bancroft acts the Hell out of her role as a drunken con artist.  Peter Gallagher is the lawyer you distrust because he’s Peter Gallagher.  Tobin Bell shows up as a handyman.  Gwynneth Paltrow, in one of her first roles, plays dead convincingly

It’s a big and busy and messy film and it too often mistakes being complicated for being clever.  Bill Pullman is a likable hero but you have to be willing to overlook that the script requires him to do some truly stupid things.  Nicole Kidman is always well-cast as a femme fatale but again, the script often lets her down.

Surprisingly enough, it’s Alec Baldwin who comes out of the film unscathed.  Watching Baldwin in this film, it’s hard to believe that he’s the same actor who has since become something of a bloated self-parody.  Yes, he’s playing an arrogant character (which is pretty much his trademark) but, in Malice, he actually brings a hint of subtlety and wit to his performance.  Baldwin does very little bellowing in the film, despite playing a role that one would think would naturally appeal to all of his bellowing instincts.  Malice is a mess but it’s nice to see the type of actor that Alec Baldwin once was. 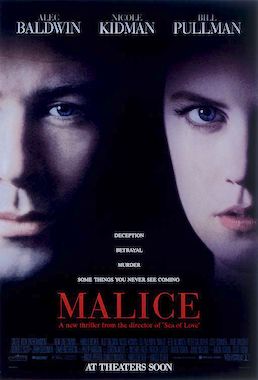