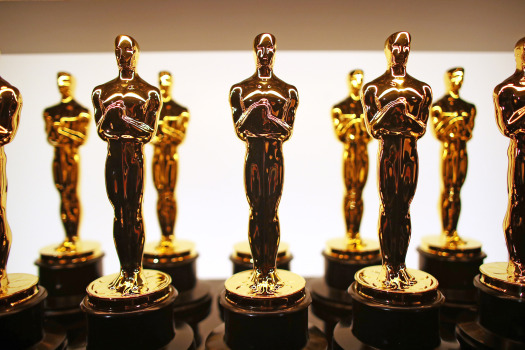 It’s Oscar night in Hollywood! We all may have our gripes with the Academy over things like the nominating process (see my posts on THE OTHER SIDE OF THE WIND , STAN & OLLIE and THEY SHALL NOT GROW OLD ), but in the end, we’ll all still be watching – I know I will!

One of my gripes over the years has always been how the horror genre has gotten little to no attention from Oscar over the years. Sure, Fredric March won for DR. JEKYLL & MR. HYDE , but there were plenty of other horror performances who’ve been snubbed. The following ten actors should have (at least in my opinion) received consideration for their dignified work in that most neglected of genres, the horror film:

(and I’ll do this alphabetically in the interest of fairness) 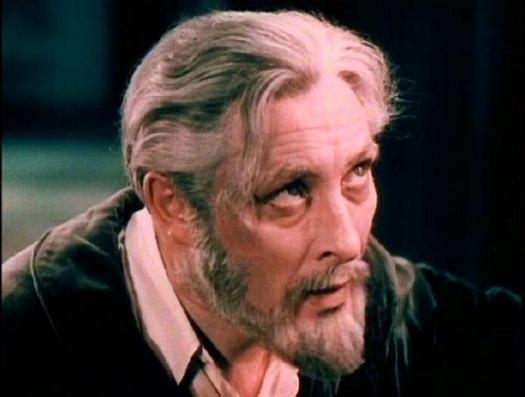 Atwill’s Ivan Igor in MYSTERY OF THE WAX MUSEUM goes… 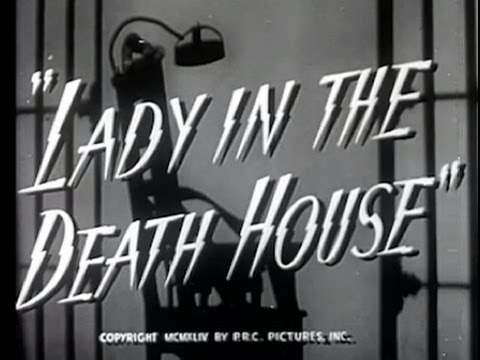 The 1944 film, Lady in the Death House, tells the tragic and faintly ridiculous story of Mary Kirk Logan (Jean Parker).

The daughter of a small-time criminal, Mary has spent most of her life trying to escape from her family’s legacy of crime.  She’s even got a job, working at the same bank that her father once tried to rip off.  Of course, at work, everyone knows her as Mary Kirk and they have no idea that her father was the infamous Tom Logan.  If that information got out, Mary would lose her job and no longer be able to take care of herself or her younger sister, Suzy (Marcia Mae Jones).

One night, Mary is out on a date with a clumsy man who takes her out to a nightclub and manages to accidentally set Mary’s dress on fire.  Luckily, Dr. Brad Braford (Douglas Fowley) is there, having a drink with his friend, the famous criminologist, Charles Finch (Lionel Atwill).  Brad jumps into action, extinguishing the fire and saving Mary’s dress.  It’s love at first sight.

There’s just one problem.  Dr. Bradford is studying ways to bring the dead back to life and, in order to raise money for his research, he’s been working as the state’s executioner.  When someone goes to the electric chair, Brad is the one who pulls the lever.  Mary says that she can only marry Brad if he gives up his electrifying night job.

However, before Brad can turn in his letter of resignation, Mary is arrested for the murder of Willis Millen (Dick Curtis), a crook who once knew her father.  Mary swears that she’s innocent but there are two eye witnesses who testify that they not only heard Mary and Willis fighting but that they also saw the shadow of someone hitting Willis over the head with a lamp.  It doesn’t take long for the jury to reach a verdict: 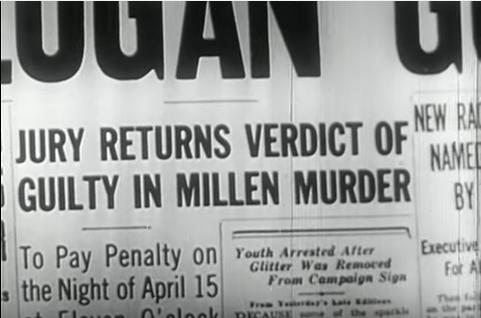 I have to admit that, when this newspaper appeared on-screen, I was actually more curious about the “youth” who was arrested for stealing glitter off of campaign signs.  However, for whatever reason, the film declines to follow up on that story.  Instead, we watch as Mary goes to death row, with the knowledge that she is to die “at the hand of the man I love.”

However, there may still be hope!  Charles thinks that Mary is innocent.  Though there’s only 24 hours left before Brad is scheduled to execute Mary, Charles launches an investigation of his own.  But even if Charles is able to find the evidence that exonerates Mary, will he be able to contact the governor in time?  Or will Mary go to the chair?

Well, regardless of what happens, rest assured that this World War II-era film will end with an appeal for all movie goers to do the right thing and buy war bonds. 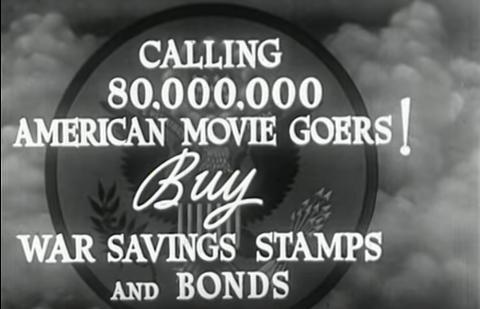 Lady in the Death House is an entertaining but fairly ludicrous little movie.  I mean, realistically, having the executioner execute his own fiancée is a huge conflict of interest.  It seems like they could have gotten a substitute executioner, if just for one night.  But, if they did that, we wouldn’t get the melodramatic highlight of Mary announcing that she’s scheduled to be killed “by the hand of the man I love.”

Lady in the Death House provides a rare chance to see Lionel Atwill in a heroic role.  The British actor played a countless number of mad scientists, killers, and Nazis before his premature death in 1946.  (Atwill’s promising career was derailed in 1943, when he accused of hosting orgies at home and was subsequently convicted of perjury.  That’s one reason why Atwill turned up in a “poverty row” feature like this one.)  Atwill is convincing as Charles Finch.  The same superior attitude that made him a good villain also makes him believable as the only person capable of figuring out who murdered Willis Millen.

Taking on its own terms, Lady in the Death House is a fun movie.  If nothing else, it provides a lesson on how to get a message to the governor, even if no one’s quite sure where he is for the evening.  That’s an important lesson to learn! 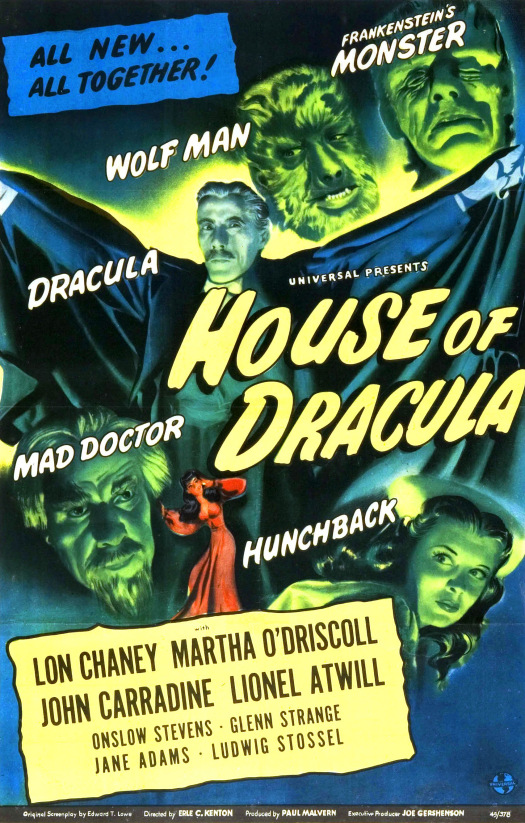 Since I’ve already reviewed HOUSE OF FRANKENSTEIN back in 2015,  we now turn our attention to HOUSE OF DRACULA, the last “official” entry in the series (though the Universal Monsters would ‘Meet Abbott & Costello’ three years later). The film tries to put a new slant on things, using science to conquer the supernatural, but winds up being just a hodgepodge of familiar horror tropes without much cohesion. HOUSE OF DRACUA does have its fans, but I’m not one of them. 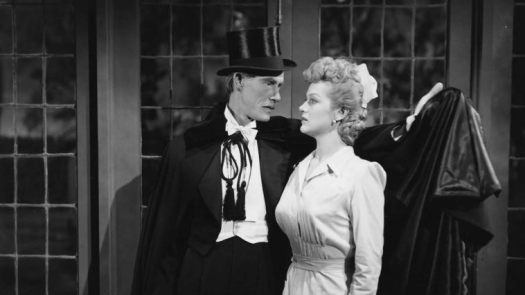 John Carradine  returns as Count Dracula, introducing himself as Baron Latos to Dr. Edlemann (Onslow Stevens ) and seeking a cure for his vampirism. Edlemann discovers a “peculiar parasite” in Dracula’s blood, and believes he can cure him through a series of transfusions. But the Count, that sneaky devil, has his fangs set for Edlemann’s pretty nurse Militza (Martha O’Driscoll),  whom he hypnotizes with those hypnotic eyes of his… 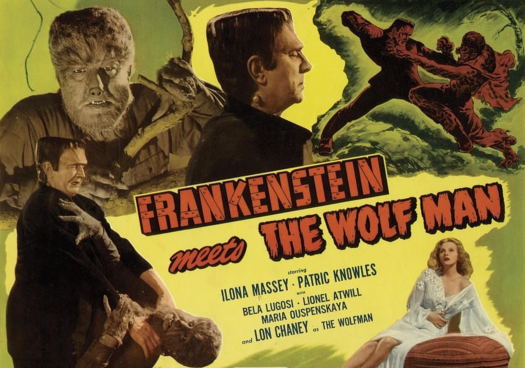 FRANKENSTEIN MEETS THE WOLF MAN was Universal’s first Monster Mash-Up, and in my opinion the best of the lot. From here, things got a little crowded, but by spotlighting just two supernatural terrors, we get a spooky, atmospheric ‘B’ film that really works. Lon Chaney Jr. returns to his signature role of Lawrence Talbot, suffering from the curse of lycanthropy, and he’s even better than in the original (which I reviewed in 2015 ). And The Monster is played by 60-year-old Bela Lugosi , in the part he rejected twelve years earlier. Bela’s interpretation is… interesting (but more on that later). 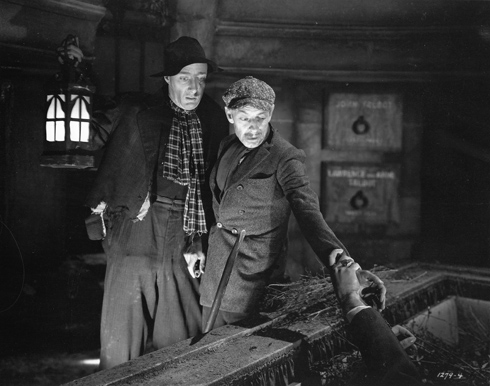 The eerie opening scene features two graverobbers under a full moon, breaking into the Talbot family crypt. Opening the lid of the late Larry Talbot’s coffin, they find the body is covered in wolfbane, and one of them recites that familiar “Even a man who’s pure in heart…” poem… 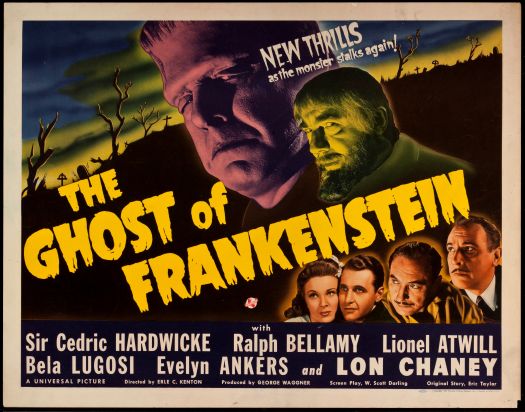 The success of Universal’s SON OF FRANKENSTEIN meant a sequel was inevitable, and the studio trotted out GHOST OF FRANKENSTEIN three years later. Horror stalwarts Bela Lugosi (as the broken-necked Ygor) and Lionel Atwill (although in a decidedly different role than the previous film) were back, but for the first time it wasn’t Boris Karloff under Jack Pierce’s monster makeup. Instead, Lon Chaney Jr., fresh off his triumph as THE WOLF MAN , stepped into those big asphalter’s boots as The Monster. But while SON OF was an ‘A’ budget production, GHOST OF FRANKENSTEIN begins The Monster’s journey into ‘B’ territory. 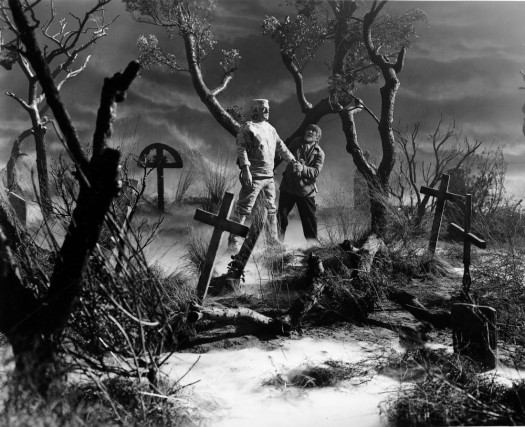 Old Ygor is still alive and well, “playing his weird harp” at deserted Castle Frankenstein. The villagers (including Dwight Frye! ) are in an uproar (as villagers are wont to do), complaining “the curse of Frankenstein” has left them in poverty, and storm the castle to blow it up… 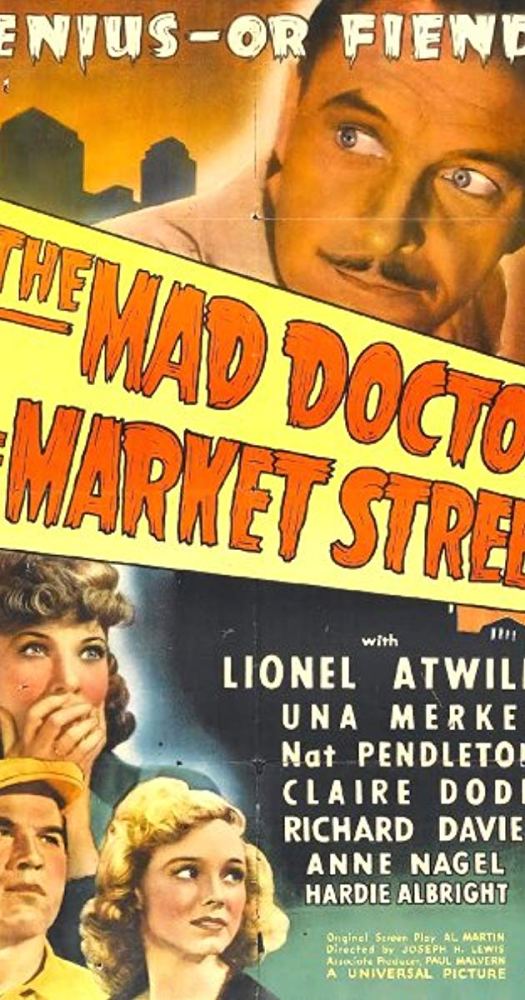 The natives are getting restless… and you will too, while watching THE MAD DOCTOR OF MARKET STREET, which feels a lot longer than its 61 minute running time. The film does have a few saving graces, mainly the great Lionel Atwill as a mad scientist experimenting with bringing people back from the dead, and is an early endeavor for future film noir auteur Joseph H. Lewis . But the extremely lame script by Al Martin, whose inexplicably long career included the Lewis-directed Bela Lugosi vehicle INVISIBLE GHOST, manages to sink this shocker despite Atwill’s and Lewis’s best efforts. 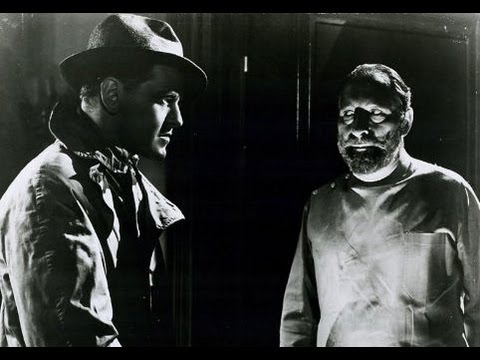 Dr. Ralph Benson offers a man $1000 to let him put the man in a “catatonic state”, and revive him later. Benson has mad dreams about conquering death and disease with his untried (and definitely not FDA approved) methods. When the man doesn’t return home the next day, his wife calls the…

For today’s horror on the lens, we have 1939’s The Hound of the Baskervilles!

Based, of course, on the novel by Arthur Conan Doyle, The House of the Baskervilles is well-remembered for being the first of many Sherlock Holmes films to star Basil Rathbone as the detective and Nigel Bruce as his loyal sidekick, Dr. Watson.  Interestingly enough, Holmes is absent for a good deal of the film, leaving it up to Watson to do the majority of the investigating.  That said, you can still see why Rathbone’s interpretation of the character proved to be so popular that he would go on to play Holmes in a total of 14 movies and one radio series.