Nifty is not really a word that I ever use, mostly because I’m not 80 years old and I’m not totally sure what the word means.  I’ve always assumed that nifty is way of saying that something is good without being too good and, if that’s true, then I have to say that the low-budget 1954 film noir, Highway Dragnet, certainly is a nifty film.

Highway Dragnet opens with Jim Henry (Richard Conte, who decades later would play the evil Barzini in The Godfather) in Las Vegas.  Jim’s just gotten out of the army and he’s visiting his friend, Paul (Frank Jenks).  Paul is a secret agent who is often unexpectedly called away.  Unfortunately, this means that Paul is not around when Jim is accused of murdering another man.  Since Jim was previously seen hitting on the dead man’s girlfriend, the police naturally assume that Jim’s the murderer.  When Jim says that Paul can provide an alibi whenever he gets back from doing his super secret spy stuff, the cops assume that Paul doesn’t actually exist.

Under the direction of the stern Lt. White Eagle (Reed Hadley), the cops are doing a lot of assuming!  Now, if Jim was smart, he would say, “Hey, White Eagle, you know what?  When you assume, you make an ass out of u and me!”  But Jim’s not smart so he decides to fire a gun at the cops and then go on the run!

Hey, Jim …. none of that makes you look innocent!

Anyway, while making his way across the desert, Jim comes across two women who are having car trouble.  Mrs. Cummings (Joan Bennett, who went from nearly getting cast as Scarlett O’Hara in Gone With The Wind to becoming a low-budget noir mainstay) is a fashion photographer and Susan Willis (Wanda Hendrix) is her model.  Jim fixes their car and then asks them for a ride.  They agree, little knowing that they’re heading straight into a …. HIGHWAY DRAGNET!

Of course, it turns out that Jim’s new friends have a connection to the crime of which he’s been accused.  The plot of Highway Dragnet hinges on a totally implausible coincidence.  This is perhaps not surprising when you consider that the script for Highway Dragnet was written by the legendary Roger Corman.  In fact, it was the first script that he ever sold and, though the film was directed by Nathan Juran, Highway Dragnet feels very much like a Corman quickie.  The plot is whatever it needs to be to get the story from the beginning to the end in 71 minutes.  Whether it all makes sense or not doesn’t appear to be all that much of a concern.

So, here’s what does work about Highway Dragnet.  First off, director Nathan Juran (who was also an award-winning art designer) manages to capture some memorable images of the Nevada desert and the film ends with a wonderfully over-the-top and atmospheric confrontation in a flooded house.  Secondly, Joan Bennett is as passive-aggressively menacing in Highway Dragnet as she would later be in Dario Argento’s Suspiria.  I also liked the performance of Reed Hadley, playing the unstoppable and incorruptible Lt. White Eagle.

Last Saturday, I watched Highway Dragnet with my friends in the Late Night Movie Gang and we enjoyed it.  It’s undoubtedly a minor film noir but it’s still entertaining when taken on its own terms.  If nothing else, the box office success of this low-budget production (which was shot over ten days) reportedly inspired Roger Corman to get serious about pursuing his own career in the film industry and, for that, movie lovers will always be thankful.

I suppose you could categorize THE BLOODY BROOD as Canadian Beatnik Noir – and it would definitely be a category of one! But this low-budget entry from The Great White North tells its tale at a fairly swift pace (or aboot as swift as those Canucks can get, eh?), features an oddball cast of characters, and offers viewers the unquestionably non-Canadian Peter Falk in his second film as a dope-peddling psychopath who gets his kicks from “death… the last great challenge of the collective mind”. 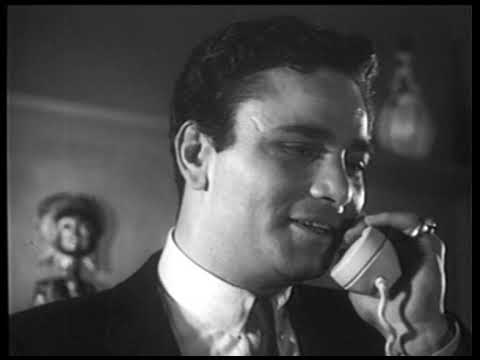 Falk, warming up for his breakthrough role as Abe ‘Kid Twist’ Reles in MURDER INC. a year later, plays Nico, who  pushes his junk to the Beat Generation rejects that hang around the local cafe (“He’s a salesman, baby… he sells dreams”). When an old man dies of a heart attack before their eyes, psycho Nico thinks it’d be far-out to deliberately off a square…

I’m just gonna come right out and say it: THE THIRD MAN is one of the greatest movies ever made. How could it not be, with all that talent, from producers Alexander Korda and David O. Selznick, director Carol Reed , screenwriter Graham Green, and cinematographer Robert Krasker, to actors Orson Welles, Joseph Cotten, Alida Valli , and Trevor Howard. It’s striking visuals, taut direction, and masterful acting transcend the film noir genre and make THE THIRD MAN one of the must-see films of 20th Century cinema. 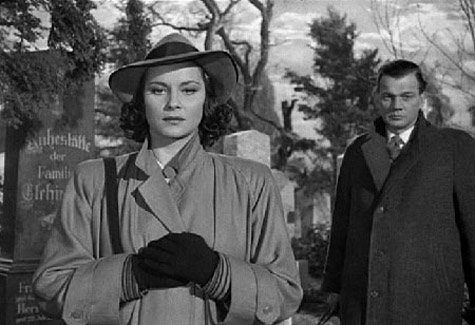 The story starts simply enough, as American pulp novelist Holly Martins arrives in post-war Vienna to meet up with his old pal Harry Lime, only to learn that Harry was recently killed in a car accident. He attends the graveside service, meeting Harry’s mysterious actress girlfriend Anna Schmidt, and is quickly pulled down a rabbit hole of intrigue and deception involving the British…

Martin and Reiner’s first comedy, 1979’s THE JERK, was an absurdist lover’s delight, and this time around the two, along with cowriter George Gipe, concocted this cockeyed detective saga after combing through old black and white crime dramas (we didn’t call ’em film noir back then) and cherry picking scenes to build their screenplay around. Martin plays PI…

The trio that brought you KANSAS CITY CONFIDENTIAL – star John Payne, director Phil Karlson, and producer Edward Small – teamed again for 99 RIVER STREET, and while it’s not quite on a par with their film noir classic, it’s crammed with enough sex’n’violence to hold your interest for an hour and a half. Karlson’s direction is solid, as is the cast (including a knockout performance by Evelyn Keyes), and the camerawork of the great Austrian cinematographer Franz Planer gives it a wonderfully brooding touch of darkness. 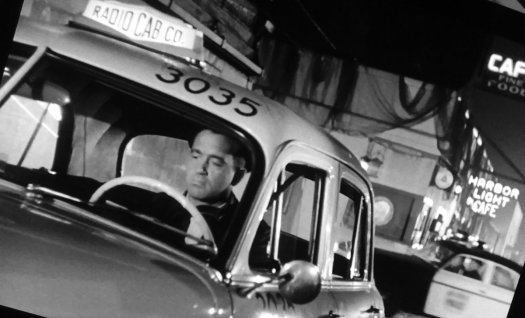 The story itself is highly improbable yet highly entertaining: ex-boxer Ernie Driscoll (Payne), once a heavyweight contender now reduced to driving a cab, is married to ex-showgirl Pauline (the delectable Peggie Castle), who’s two-timing him with crook Victor Rawlins (slimebag Brad Dexter ). Ernie catches them making out through the window of the flower shop Pauline works at, and his PTSD is triggered…

Film noir buffs usually point to 1940’s STRANGER ON THE THIRD FLOOR as the first of the genre. Others cite 1941’s THE MALTESE FALCON as the film that launched the movement. But a case could certainly be made for William Wyler’s THE LETTER, released three months after STRANGER, but containing all the elements of what would be come to called film noir by future movie buffs. THE LETTER also features a bravura performance by Miss Bette Davis , who was born on this date in 1905, as one hell of a femme fatale.

The movie starts off with a bang (literally) as Bette’s character Leslie Crosbie emerges from her Malaysian plantation home pumping six slugs into Geoff Hammond under a moonlit night sky. The native workers are sent to fetch Leslie’s husband, rubber plantation supervisor Robert, from the fields. He brings along their attorney Howard Joyce, and it’s a… 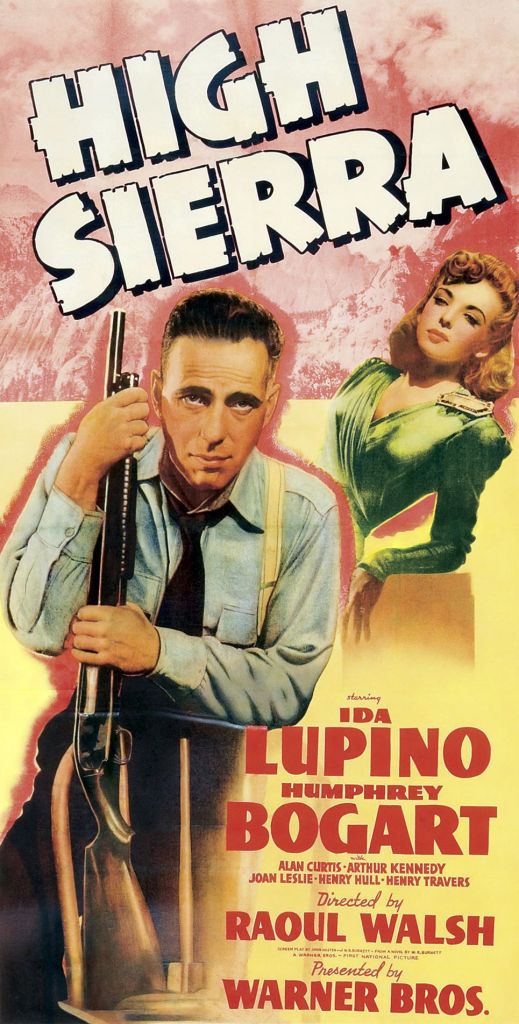 Humphrey Bogart played yet another gangster in Raoul Walsh’s HIGH SIERRA, but this time things were different. Bogie had spent the past five years at Warner Brothers mired in supporting gangster parts and leads in ‘B’ movies, but when he read John Huston and W.R. Burnett’s screenplay, he knew this role would put him over the top. James Cagney and Paul Muni both turned it down, and George Raft was penciled in to star, until Bogie put a bug in his ear and Raft also refused it. Bogart lobbied hard for the role of Roy Earle, and his instincts were right: not only did HIGH SIERRA make him a star at last, it led to him getting the lead in his next picture THE MALTESE FALCON , the directorial debut of his good friend Huston. 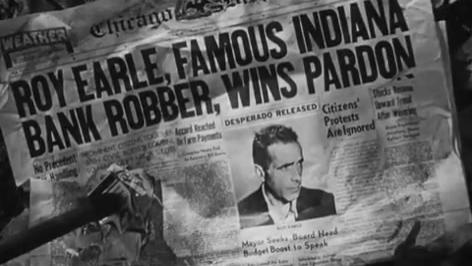 1941’s THE MALTESE FALCON may not be the first film noir (most people agree that honor goes to 1940’s STRANGER ON THE THIRD FLOOR ). It’s not even the first version of Dashiell Hammett’s 1930 detective story – there was a Pre Code film with Ricardo Cortez as Sam Spade that’s pretty good, and a 1936 remake titled SATAN MET A LADY with Warren William that’s not. But first-time director John Huston’s seminal shamus tale (Huston also wrote the amazingly intricate screenplay) virtually created many of the tropes that have become so familiar to fans of this dark stylistic genre:

THE HARD-BOILED DETECTIVE – Private investigators had been around since the dawn of cinema, from Sherlock Holmes to Philo Vance to Charlie Chan, but none quite like Humphrey Bogart’s Sam Spade. Both Cortez and William played the character as flippant skirt-chasers, but in Bogie’s hands, Sam Spade is a harder…

Love takes many strange forms, none more strange than the obsessive love Don Jose has for the Gypsy temptress Carmen in THE LOVES OF CARMEN, Columbia Pictures’ biggest hit of 1948. The film, based on Prosper Merimee’s 1845 novella and Georges Bizet’s famous opera, reunites GILDA stars Rita Hayworth and Glenn Ford with director Charles Vidor, and though it’s in glorious Technicolor and set in 1800’s Spain, it’s got a lot of film noir elements going for it: there’s the protagonist caught in a rapidly moving downward spiral, the amoral femme fatale, crime, murder, and a bleak, downbeat ending. Think I’m stretching a bit? Let’s take a look…

Young nobleman Don Jose arrives in Seville with a dragoon squadron, a corporal with political ambitions and a bright future ahead of him… until he meets Carmen, a gorgeous red-haired Gypsy who is an expert manipulator. Jose is enchanted by this free-spirited…

“In this cage, you get tough or you get killed” – Kitty Stark (played by Betty Garde) in CAGED

The Grandmother of all “Women in Prison” films, CAGED still packs a wallop, nearly seventy years after it’s release. This stark, brutal look at life inside a women’s penitentiary was pretty bold for its time, with its savage sadism and heavy lesbian overtones, and matches up well with BRUTE FORCE as an example of film noir prison flicks. Everything about this film clicks, from its taut direction by John Cromwell to the use of sound to create mood by Stanley Jones, plus a powerhouse mostly female cast led by Eleanor Parker .

The 28-year-old Parker convincingly plays 19-year-old Marie Allen, given a one-to-fifteen year sentence for accessory to an armed robbery during which her husband was killed. The mousey Marie is indoctrinated, given a number (Prisoner #93850), and poked and…