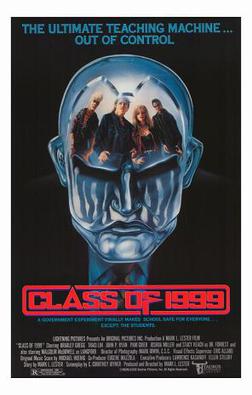 The year is 1999 and John F. Kennedy High School sits in the middle of Seattle’s most dangerous neighborhood.  Teenage gangs have taken over all of the major American cities and just going to school means putting your life in danger.  However, Dr. Bob Forest (Stacy Keach!), the founder of MegaTech, has a solution.  He has taken former military androids and reprogrammed them to serve as educators.  JFK’s principal, Miles Langford (Malcolm McDowell!!), agrees to allow his school to be used a testing ground.  Soon, Miss Conners (Pam Grier!!!) is teaching chemistry.  Mr. Byles (Patrick Kilpatrick) is teaching gym.  Mr. Hardin (John P. Ryan) is teaching history.  When they’re not teaching, these robots are killing truant students and manipulating two rival street gangs into going to war.

Imagine mixing Rebel With A Cause with The Terminator and you get an idea of what Class of 1999 is like.  Two of the only good teenagers (played by Bradley Gregg and Traci Lind) figure out that the teachers are killing their classmates but they already know that they won’t be able to get anyone to listen to them because they’re just kids who go to school in a bad neighborhood.  Meanwhile, the teachers have been programmed to do whatever has to be done to keep the peace in the school.  Why suspend a disruptive student when you can just slam his head into a locker until he’s dead?  Director Mark L. Lester (who previously directed Class of 1984) is an old pro when it comes to movies like this and he’s helped by a better-than-average cast.  Any movie that features not only Stacy Keach and Malcolm McDowell but also Pam Grier is automatically going to be cooler than any movie that doesn’t.

When Class of 1999 was made, 1999 was considered to be the future and, in many ways, the movie did prove to be prophetic.  We may not have robot teachers (yet) but the idea of arming teachers and expecting them to double as cops has become a very popular one over the past few years.  Personally, I wouldn’t want to send my children to a school where the teachers all have to carry a gun while teaching but that may just be me.