(Hi there!  So, as you may know because I’ve been talking about it on this site all year, I have got way too much stuff on my DVR.  Seriously, I currently have 178 things recorded!  I’ve decided that, on February 1st, I am going to erase everything on the DVR, regardless of whether I’ve watched it or not.  So, that means that I’ve now have only have a month to clean out the DVR!  Will I make it?  Keep checking this site to find out!  I recorded House of the Witch, off of SyFy on October 7th, 2017!) 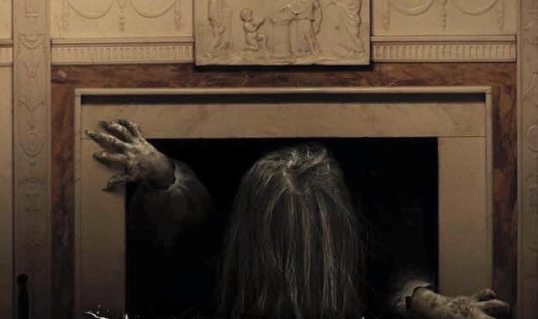 Let’s say that you’re a teenager and you’re living in a small, rural town.  There’s not really much to do, other than making out in pickup trucks and hanging out at the local diner.

However, there is a haunted house.

Of course, the official story is that the house isn’t haunted because everyone knows that there’s no such thing as ghosts.  That said, the house does have a long and somewhat infamous history.  And everyone knows that going anywhere near the house would probably be considered to be trespassing.  In fact, one of your classmates is currently missing.  He was last seen talking to two girls who dared him to pry the address off of the house’s front door.

So, it’s Halloween night.  And you’re living in a small town and there’s not a whole lot to do.

So, the question is: would you break into the haunted house?

Now, I know a lot of you are probably saying that there’s no way you would break into that house.  You’re too smart for that!  No way would you break the law and risk your lives just so you could go inside a condemned house!  You’re just going to go home early, do your homework, and get some sleep so you can wake up rested and ready for school on November 1st!

That’s what people say but we all know that’s not true.  If I found myself in that situation, I would totally break into that house and so would you.  Let’s just be honest here.  It’s fun to take chances.  It’s fun to get scared on Halloween, especially when your best friends are the ones who are scaring you.  Even more importantly, it’s fun to think about how, for years afterward, you can brag about how you spent the night in a haunted house and you survived!

House of the Witch is wonderfully creepy little movie about a group of teenagers who give into their natural instincts and break into a house on Halloween.  Needless to say, the house turns out to be even more haunted than they were led to believe.  In fact, the house is home to an ancient witch.  Soon, everyone is trapped in the house and being hunted down one-by-one.  Blood is spilled.  Fingers are lost.  Faces are infected with … something.

The storyline may sound simple but it’s also wonderfully effective and atmospheric.  The dilapidated house is a truly frightening location and it just gets more frightening as the film progresses.  By the end of the movie, I was looking over my shoulder to make sure that there weren’t any witches creeping around my living room.  (Fortunately, there weren’t.)  The film does a great job of keeping the viewer off-balance.  Even though you know that damn witch is going to be behind every corner, you still jump when she suddenly pops up.

I liked the whole look of the film.  Early on in the film, there’s a wonderful overhead shot of a pickup truck heading towards the house and the scene perfectly captures not only the creepiness of Halloween but also the emptiness of life in the nearby small town.  Seeing the truck driving past empty and endless fields, it was easy to understand why the film’s characters were drawn to that cursed house.  In a landscape defined by nothing, that house and its infamous reputation was at least something.

All in all, this was a great film for Halloween.

(Hi there!  So, as you may know because I’ve been talking about it on this site all year, I have got way too much stuff on my DVR.  Seriously, I currently have 178 things recorded!  I’ve decided that, on February 1st, I am going to erase everything on the DVR, regardless of whether I’ve watched it or not.  So, that means that I’ve now have only have a month to clean out the DVR!  Will I make it?  Keep checking this site to find out!  I recorded Wicked Mom’s Club, off of the Lifetime Movie Network on October 7th, 2017!) 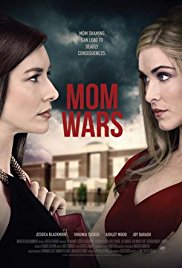 “You know girls.  Friends one day.  Enemies the next.”

To be honest, before I actually sat down and watched this film, I assumed it was going to be comedy.

I mean check out the name: Wicked Mom’s Club.  Doesn’t that just bring to mind snarky comments shared over wine and dark secrets?

And then I read the plot description, which basically said that the film was about a single mother who had to defeat the evil moms on the PTA.  That sound like a comedy, doesn’t it?

But then I actually started the movie and it begain with a woman sobbing as she committed suicide in her suburban garage.  At that point, it was obvious that Wicked Mom’s Club was not going to be a comedy.

Instead, it’s another “based-on-a-true-story” Lifetime film about all of the sordid secrets of the suburbs.  It starts with Mandy (Jessica Blakemore) and her teenage daughter Riley (Virginia Tucker) moving into a new house.  They’re looking to start a new life.  Mandy is freshly divorced from a husband who used to cheat on her.  Riley is a talented gymnast who got suspended from her previous school when she tested positive for drugs.  It’s time for a new beginning!  Not only do they have a new house but Mandy has a great job and an amazingly popular “mommy blog.”

Mandy meets Olivia (Ashley Wood).  Olivia is the leader of the Gym Moms, a group of mothers whose daughters are all into gymnastics.  At first, Olivia appears to be the nicest person in town.  She talks about how much she loves Mandy’s blog.  Riley becomes best friend’s with Olivia’s daughter, Chelsea (Bekka Walker).  Mandy even confides in Olivia about Riley’s drug problems…

Uhmm, maybe she shouldn’t have done that.

From the beginning, there are hints that Olivia might not be as friendly as she seems.  For instance, she deliberately knocks over a bag in order to distract Riley in the middle of her routine.  Olivia always seems to be ordering the other Gym Moms around.  Plus, a former Gym Mom approaches Mandy and warns her not to trust Olivia….

When Riley turns out to be a better gymnast than Chelsea, strange things start to happen.  For instance, when Mandy tries to get a sponsor for her blog, she is shocked to discover that someone else has started a blog about what a terrible mother Mandy is.  Since the entire town is obsessed with not only Mandy’s blog but also the random comments that are left on it, everyone starts to turn against Mandy.  No one wants anything to do with you when you’re a bad blogger.

But, it doesn’t stop there.  For instance, Mandy ends up getting arrested  for drug possession.  She starts to hear strange noises around her house.  She grows paranoid, wondering if maybe Riley actually is blogging about her.  Is Mandy being set up?  And is this the end of the world’s most important mommy blog?

Wicked Mom’s Club may sound melodramatic but, honestly, I think everyone has had to deal with someone like Olivia at some point in their life.  They may not all be as clever as Olivia is at destroying people’s lives but they’re out there, grown up bullies who live vicariously through their children.  I grew up dancing and I’ve always been so thankful that my mom never put me under the type of pressure that the majority of my friends had to deal with.  Ashley Wood did a good job bringing Olivia to villainous life and Jessica Blakemore and Virginia Tucker were believable as mother and daughter.  Their difficult but loving relationship felt real.

I have to admit, though, that I was a little amused by how the entire world of Wicked Mom’s Club pretty much revolved around blogs and bloggers.  I had no idea we were so powerful!

Carter Brown was the pen name of Alan Geoffrey Yates, a prolific author of pulp paperbacks.  The first Brown novel appeared in 1951 and Yates continued to write until his death 34 years later.  All in all, it is estimated that Brown wrote 322 novels.  At the height of his success, he had 120 million books in print and only the Bible was translated into more different languages than the Carter Brown novels.

Many different artists drew covers for Brown’s books.  Often times, the same book would feature several different covers, depending on the edition and the country in which it was being sold.  However, the most popular Carter Brown covers were painted by the famous artist, Robert McGinnis.  McGinnis’s covers left no doubt who the targeted audience for Carter Brown’s books were.

Below are just a few of the covers that Robert McGinnis did for the work of Carter Brown: 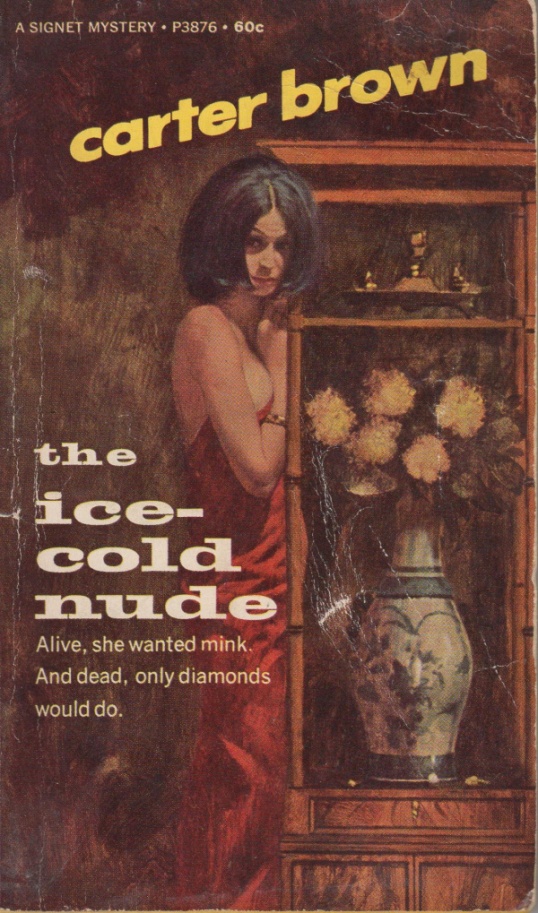 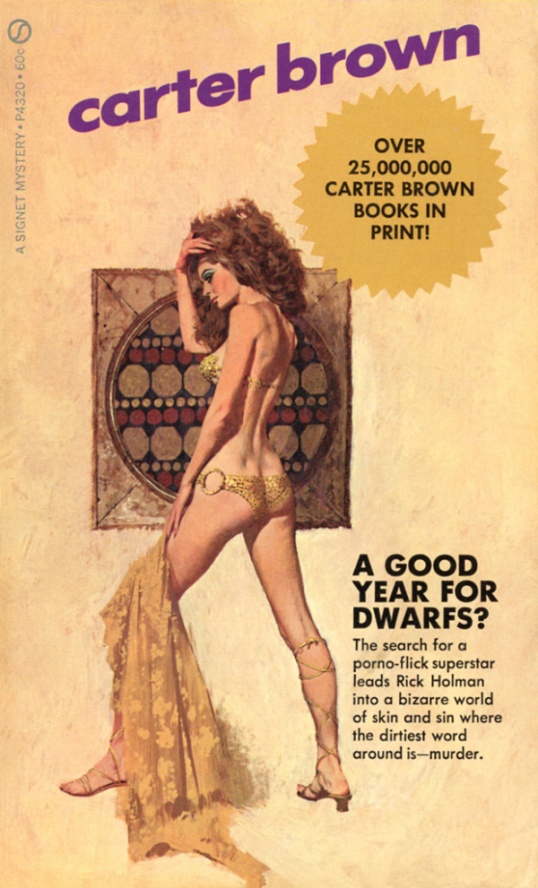 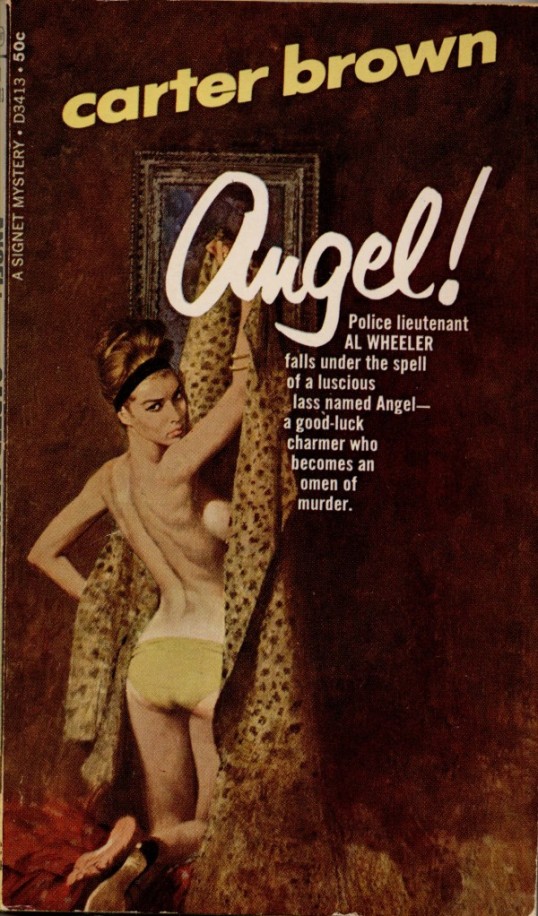 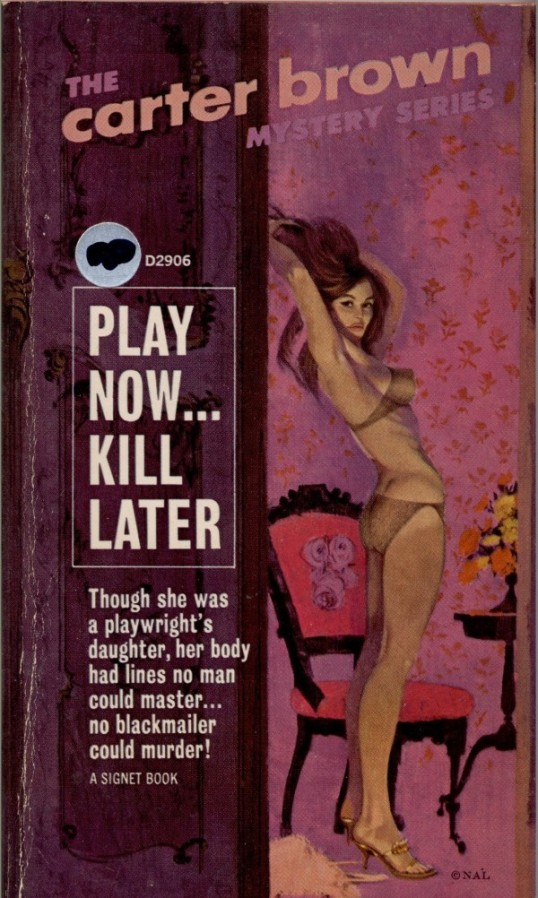 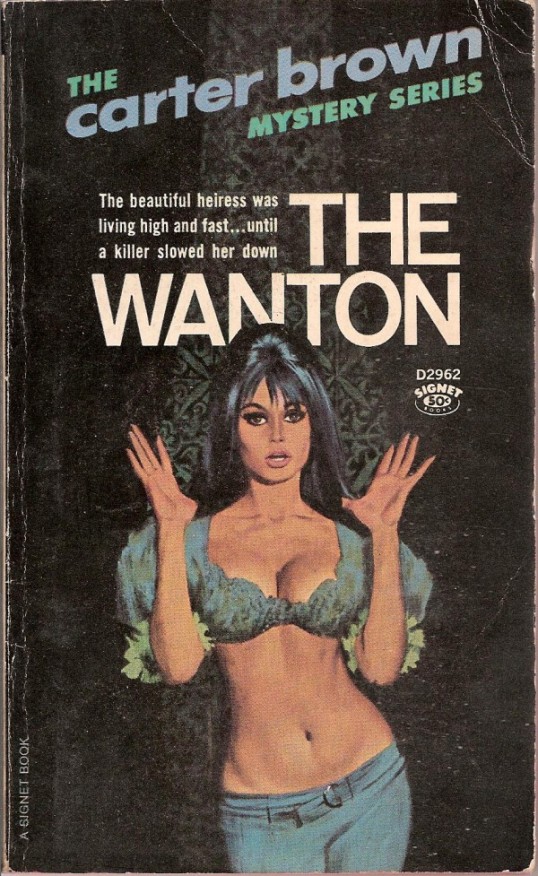 If you want to see more Carter Brown covers or more of Robert McGinnis’s work, the best site to check out is pulpcovers.com.  That’s where I found the majority of the covers featured in this post.

Well, it’s the second week of January and that means that it’s time for me to now to announce my picks for the best and worst of the previous year!  Let’s start things out with my picks for the 16 worst films of 2017!

14. King Arthur: Legend of the Sword,

Tomorrow, my look back at 2017 continues with my picks for the greatest moments for the best and most important television show of 2017, Twin Peaks: The Return!

Previous entries in the TSL’s Look Back at 2017: 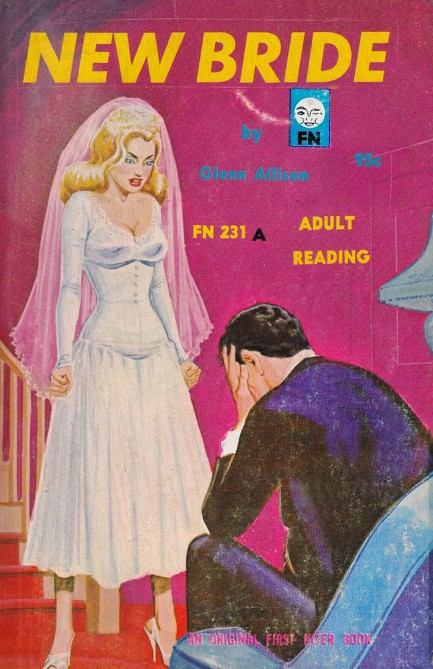 This video is super creepy.

I’m not even going to attempt to explain it, I’m just going to suggest that everyone watch.