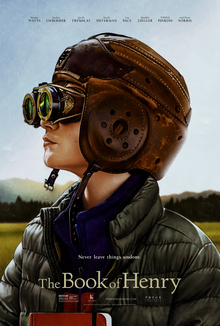 In the movies, child geniuses inevitably turn out to be little creeps at that’s certainly the case with The Book of Henry.

Henry (Jaeden Lieberher) is an 11 year-old with an exceptional IQ, which essentially means that it’s supposed to be cute when he talks down to people and treats them like shit.  In fact, Henry is such a genius that he’s managed to make a lot of money on the stock market and he also invents stuff.  He practically raises his younger brother, Peter (Jacob Tremblay, who is as authentic as Lieberher is overbaked).  He also takes care of his mom, Susan (Naomi Watts).  Susan’s a waitress because it’s a rule of movies like this that the single parent of a child genius will always either be a waitress or a physicist.  There’s really no middle ground.  Anyway, Susan appears to be destined to be forever single but she says that’s okay because Henry is the only man she needs in her life.

Anyway, Henry lives next door to the Sickleman family.  You know that’s going to be a problem because, in the movies, good people never have names like Sickleman.  Glenn Sickleman (Dean Norris) is not only the police commissioner but he’s also not a very good neighbor.  He’s the type of neighbor who complains if the leaves from your tree gets in his yard.  He’s also not really comfortable living next door to a child genius.  It’s probably because Henry is kind of a condescending jerk.

Henry suspects that Glenn is abusing his stepdaughter, Christina (Maddie Ziegler, who is best known for Dance Moms).  However, before Henry can do anything about it, he has a seizure dies.  Uh-oh, turns out that Henry had a brain tumor!  A genius killed by his own brain.  So.  Much.  Irony.

However, before he died, he left behind a book and recorded instructions for Susan.  It turns out that Henry knew he was going to die because Henry was a super genius who could see the future.  (At least, I assume that’s what happened.)  So, he decided that his mother should murder Glenn and he even came up with some helpful instructions for how she could do it and not get caught.

Now, let me ask you a question.  If you discovered that your recently deceased son spent the last few days of his life plotting how to murder his neighbor would you…

a) Destroy all the evidence and pretend you never saw it

b) Shrug and decide to grant his last wish by following his instructions and killing the neighbor?

I mean, let’s think about this.  By all evidence, it would appear that Henry was a sociopath.  Even if you accept the idea that he had to kill Glenn to save Christina, you still also have to accept the idea that he coldly and methodically plotted out the perfect way to commit a murder and then, realizing he was going to die, he decided that his mom should commit the murder instead.

This is the type of material that a director like David Fincher, Michael Haneke or Lars Von Trier could have a lot of fun with.  However, The Book of Henry was directed by Colin Trevorrow and he takes this weird sentimental approach to the material.  Instead of freaking out over having raised a sociopath, Susan immediately starts to follow all of his instructions.  What’s amazing is that, even in the recording he made for his mom to listen to after his death, Henry is still a condescending little jerk.  At one point, from beyond the grave, Henry directs his mom to take a right turn.  Then he adds, “No, your other right.”

But what really gets me about this movie is that, after all the build up, Henry’s big genius plan is for Susan to get a rifle and shoot Glenn.  That’s it.  I mean, anyone could have thought of that!  If you’re going to make a movie like this, at least have Henry come up with some big complicated scheme!  At least give us that!  I mean, honestly, Susan could have come up with Henry’s plan on her own.

Does Susan follow through with the plan?  I’m not going to tell you.  But I will tell you that the film’s climax features a school talent show.  Maddie Ziegler gets to dance.  Jacob Tremblay gets to perform a magic trick.  They’re both really talented.  Sparkle Motion does not perform and that’s a shame.  Sometimes, I doubt Colin Trevorrow’s commitment to Sparkle Motion.

Anyway, to say that The Book of Henry is a bad film doesn’t quite do justice to just how ill-conceived this film really is.  Someone decided to make a heartwarming and rather humorless film about a child ordering his mother to commit a murder.  You may think it’s a parody at first but no, it’s a real movie.  It’s The Book of Henry.

4 responses to “Playing Catch-Up With The Films of 2017: The Book of Henry (dir by Colin Trevorrow)”