When I was growing up in Baltimore, I used to go down to this independent video story every weekend and check out movies.  Every time that I stepped into the store, the first thing I saw was the poster for Blame It On Rio hanging over the front register.  The store did not actually have any copies of Blame It On Rio in stock and I don’t think anyone working there had ever seen it but it only takes one look at the poster to guess what they were thinking when they hung it at the front of the store.

Blame It On Rio is one of the films that Michael Caine made during that period when he was willing to accept any paycheck.  (The Jaws 4 years.)  Caine plays Matthew, who goes on a vacation to Rio with his 17 year-old daughter, Nikki (Demi Moore), his best friend Victor (Joseph Bologna), and Victor’s daughter, Jennifer (Michelle Johnson).  Both Matthew and Victor’s marriages are falling apart and Victor encourages Matthew to hit on every topless woman they see.  Instead, Matthew ends up fooling around with Jennifer.  When Victor discovers that his daughter to having an affair with an older, married man, he recruits Matthew to help him discover the man’s identity.  In between the scenes of all the action in Brazil, Matthew and Jennifer appear in interview segments that do no add up to much.

It may be hard to believe but this forgettable movie was co-written by Larry Gelbart and directed by the same director responsible for Singin’ In The Rain, Charade, and Two For The Road, Stanley Donen.  For a film about a 43 year-old man having a sexual relationship with a 17 year-old, Blame It On Rio is a hopelessly square movie.  Caine and Bologna walking along a topless beach and accidentally leering at their own daughters is about as funny as things get.  Michael Caine’s a trooper and does the best that he can but Michelle Johnson is bland as Jennifer.  She and Demi Moore should have switched roles.

While laid up at home battling sciatic nerve pain (which is pretty damn painful!), I turned on TCM for relief, and started watching BROADWAY RHYTHM, a 1944 musical starring George Murphy, Gloria DeHaven, and Jimmy Dorsey, among others. The movie itself was no great shakes, but this scene featuring a trio known as the Ross Sisters singing and dancing to “Solid Potato Salad” grabbed my attention:

Holy pretzels, Batman! Who were these scat-singing, torso-bending ladies?? I did a little research and found out, because… well, because that’s what I do! Apparently, they were Betsy, Vicki, and Dixie Ross from West Texas, who performed under the stage names Aggie, Maggie, and Elvira. These show-biz kids were teens at the time, but already gaining steam for their acrobatic contortions and three-part harmonies. The sisters even performed before the King & Queen of England at the London Pallaidium in 1946. Imagine that! 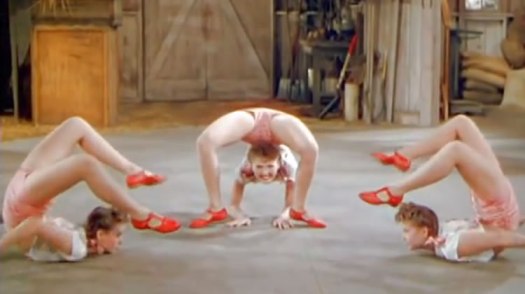 
It has come to an end. When I started this “30 Days Of Surrealism” thing, I really had one video in mind. This is that video. Nik Kershaw breaking into someplace, and getting pushed down into a giant question mark by The Riddler with nothing but surreal things around him as he tries to make his way to the end of it.

I could walk through the video pointing things out, but I don’t need to. Kershaw himself does that in the video below. It seems to be a truncated version of something where he did the whole video. It’s stil pretty good, and he talks about the song as well. The video should be there. It is just one of those that doesn’t want to show its thumbnail for some reason.

Most of the things in the video are easy to spot after a couple of watches. There is one that took me many viewings to spot. The teapot with multiple spouts. The first time you see it, it appears to only have one of them.

But when he passes by it, you can clearly see that there are two of them. 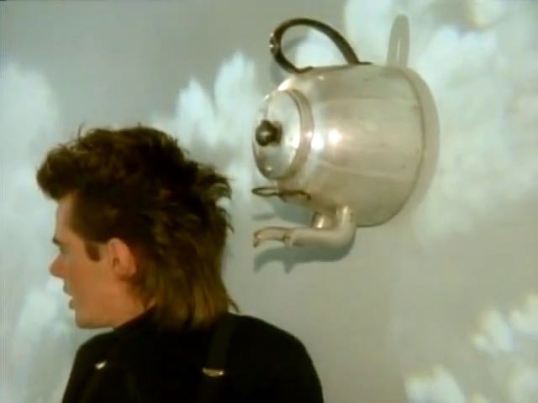 Enjoy the video, and keep your eyes pealed because there’s something everywhere. Even the words on the head that Kershaw runs his hands over.