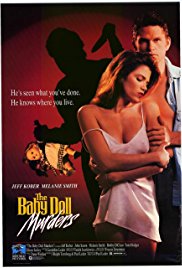 Naked women are turning up murdered in Los Angeles.  The only clue that the crimes are connected: the baby doll that is left beside each body.  Can detectives Louis (Jeff Kober) and Larry (Bobby Di Cicco) solve the case while also dealing with issues in their own private life?  Louis’s girlfriend (Melanie Smith) is worried that Louis is becoming obsessed with is work and that he is not willing to commit to their relationship. Larry is upset because he suspects his wife is keeping a secret from him.  Their chief (John Saxon) wishes they would just solve the case, especially when the killer targets his own daughter.  The problem is that Louis is so driven and prone to violence that he has managed to get himself suspended from the force.  Why does that always happen to good cops?

The Baby Doll Murders is a straight-to-video thriller that used to be popular on cable, back in the Skinemax days.  Probably the most memorable thing about the film is the absurd lengths it goes to find an excuse for every woman in the film to have at least one topless scene before being attacked by the baby doll murderer.  Otherwise, it is a predictable movie with a better than average cast.  A talented character actor, Jeff Kober gets a rare lead role here and Bobby Di Cicco has some good moments as his neurotic partner.  Any film that features John Saxon as an authority figure can not be considered a total loss.  Saxon does not get much screen time but he does get all of the best lines.  When Kober theorizes that the murderer might have a political agenda, Saxon snaps back, “Now, wait a minute, Louis,” a lot of people have the same beliefs as the baby doll murderer and, “not all of them are killers!”  Saxon delivers his lines like a champ.

Back toe beginning?  Of just the country or of humanity itself?  Judging from this poster, it looks like both.  Are there any post-nuke adventures that aren’t outrageous?  It’s a legitimate question, I think.

To the extent that Filipino cartoonist November Garcia is a “known quantity” in  American small-press comics, it’s for her Hic And Hoc-published book Foggy Notions from a couple of years back, but now that John Porcellino is stocking the first two issues of her self-published autobio series Malarkey at Spit And A Half, I’m sincerely hoping that a lot more attention is in store for her. 2017 was a breakthrough year for the likes of Emil Ferris, Ben Passmore, Eric Kostiuk Williams, Katie Skelly, and other formerly-emerging talents — if I had to place a wager on the first person to “break through” in 2018, it could very well be Garcia.

I confess to not being terribly “plugged in” to the contemporary cartooning scene in the Philippines, but I know that the country’s rich tradition of woodcut art heavily informed the work of such “Big Two” luminaries as Alfredo Alcala…

Why is Phantogram’s When I’m Small today’s music video of the day?