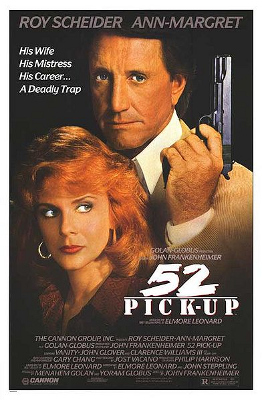 Harry Mitchell (Roy Scheider) is a businessman who has money, a beautiful wife named Barbara (Ann-Margaret), a sexy mistress named Cini (Kelly Preston), and a shitload of trouble.  He is approached by Alan Raimey (John Glover) and informed that there is a sex tape of him and his mistress.  Alan demands $105,000 to destroy the tape.  When Harry refuses to pay, Alan and his partners (Clarence Williams III and Robert Trebor) show up with a new tape, this one framing Harry for the murder of Cini.  They also make a new demand: $105,000 a year or else they will release the tape.  Can Harry beat Alan at his own game without harming his wife’s political ambitions?

Based on a novel by the great Elmore Leonard and directed by John Frankenheimer, 52 Pick-Up is one of the best films to ever come out of the Cannon Film Group.  Though it may not be as well-known as some of his other films (like The Manchurian Candidate, Seconds, Black Sunday, and Ronin), 52 Pick-Up shows why Frankenheimer was considered to be one of the masters of the thriller genre.  52 Pick-Up is a stylish, fast-paced, and violent thriller.  John Glover is memorably sleazy as the repellent Alan and the often underrated Roy Scheider does an excellent job of portraying Harry as a man who starts out smugly complacent and then becomes increasingly desperate as the story play out.

One final note: This movie was actually Cannon’s second attempt to turn Elmore Leonard’s novel to the big screen.  The first attempt was The Ambassador, which ultimately had little to do with Leonard’s original story.  Avoid The Ambassador but see 52 Pick-Up. 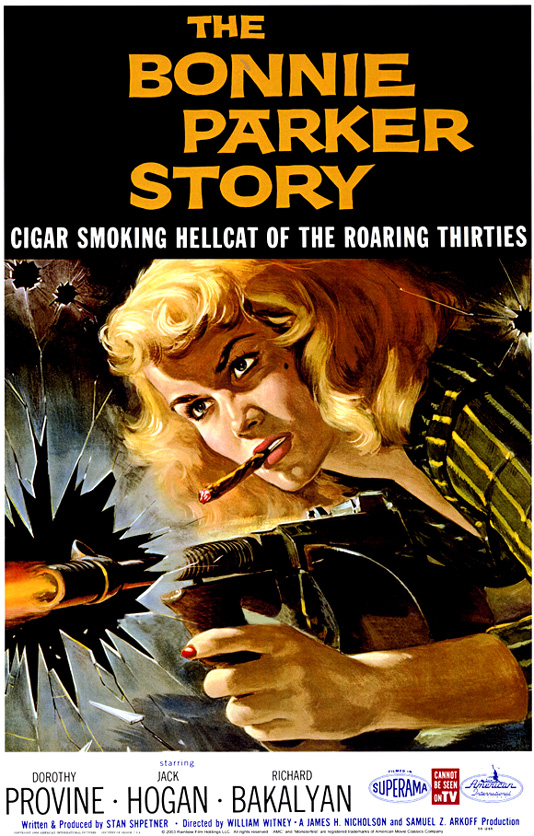 This poster is for the 1958 film, The Bonnie Parker Story.  That’s right — this film predates the better known Bonnie and Clyde by about 9 years.  Dorothy Provine was cast in the title role and, judging from this poster, it looks like her Bonnie was even more dangerous than Faye Dunaway’s!  Apparently, in this film (which I haven’t seen yet), Clyde was renamed Guy.

(Bonnie and Guy doesn’t quite have the right ring to it, does it?)

Anyway, it’s a good poster, one that is direct and in your face.  That’s something I always appreciate about any film poster.  Plus, there’s that tag line!


What happens when you take a pill in Ibiza?  Well, to start with, you get a big head and you start to resemble papier-mâché…

There’s actually two videos of this song.  There’s a video for the original version, which is largely acoustic and kind of boring, as acoustic songs often are.  And then there’s this video, which is for SeeB’s remix of the song.  The remix is definitely the superior version, though many people refuse to admit it.

(There’s a tyranny of thought that the acoustic version of a song is going to superior to any other version.  It’s simply not true.  Acoustic often equals boring.  At the height of American Idol, there was a rival singing competition called The One, where the whole gimmick was that every performance was acoustic.  Only four episodes aired and every single one of them was painful to watch.)

Anyway, as for the song, it’s very much autobiographical.  Yes, Mike Posner actually did take a pill in Ibiza and yes, he actually was trying to impress Avicii.  In much the same way that Turkish tour guides still tell people that Midnight Express was not a fair representation of the Turkish legal system, tourism official in Ibiza have repeatedly complained that the song’s popularity has led everyone to assume that Ibiza is some place where you only go to get high.

Personally, I’ve never been to Ibiza but I did once take a pill in Capri and that was quite a night.