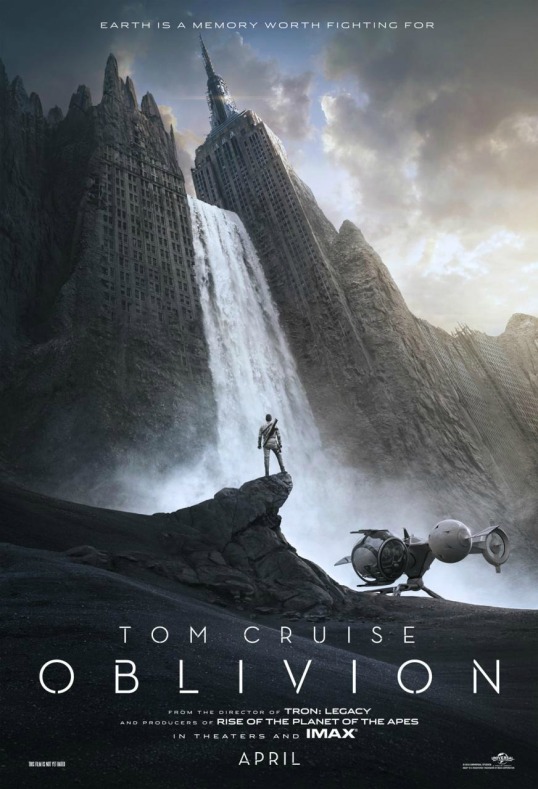 Good science-fiction films tend to be far and few between. Most of the time the ideas and ambition to make a good or great science-fiction film are right there on paper, but loses much once people actually have to create it for others to see. This puts the latest sci-fi film from Tron: Legacy filmmaker Joseph Kosinski in a weird position. His follow-up to the underwhelming sequel to the classic sci-fi film Tron is called Oblivion and it manages to be thought-provoking and entertaining, yet also have a sense of a been there and done that to the whole proceeding.

Oblivion quickly gets the introductions to the film’s backstory out of the way. Earth was attacked 60 years ago by aliens who were called “Scavengers” (Scavs for short) who destroyed the moon thus causing massive tectonic upheaval and gigantic tsunamis to ravage the planet. Humanity in its desperation would fight back with the only weapons it had left once the aliens began landing troops and that would be the nuclear kind. The planet is now devastated with the surviving population leaving Earth for a new colony on Saturn’s moon of Titan and in a massive tetrahedron space station orbiting Earth simply called “The Tet”.

It’s the story of the technician pair left behind to provide support for the array of armed drones who patrol Earth for any remaining Scavs and protect the reclamation factories that has been removing the remaining resources that the planet has to be used as an energy source for the Titan colony. This pair of technician are Jack (Tom Cruise) and Victoria (Andrea Riseborough) who live in a towering base above the clouds. Jack does the dirty work by flying patrols in the area that encompasses what used to be the East Coast of the United States while Victoria (who also happens to be Jack’s lover) provides comm and technical support back at their base.

Victoria can’t wait to finish their five-year stint on Earth and with two weeks left before they can rejoin the rest of humanity on Titan her dream is coming closer. Yet, Jack doesn’t seem to want to leave Earth behind. He has begun to dream about Earth before the war that he should have no memory of. First they’re dreams while he’s asleep but as the film shows it soon begins to invade and distract his waking hours as well.

It’s during one such mission where he comes across the a sudden arrival of a human spacecraft with surviving humans aboard that his dreams become reality. A woman he has dreamed off that he’s never met is one of the survivors (played by Olga Kurylenko) and she becomes the key to unlocking the secret that’s been kept from him about the true nature of the war that devastated Earth sixty years past and why he continues to have flashes of memories that he should never have had.

Oblivion sounds like it’s original at first glance, but as the story moves along we begin to see influences (at times outright plot point lifts) from past innovative sci-fi films such as Moon and The Matrix. While Kosinski (who co-wrote the film as well as directed it) does put his own spin on these ideas it’s not enough to fully distinguish the film from past sci-fi films which did them better. Oblivion is not bad by any means, but it fails to stretch beyond it’s influences that would’ve made it a great film instead of just being a good one. It doesn’t help that the script lags behind Kosinski’s talent for creating some beautiful images and vistas. The world-building he does with art director Kevin Ishioka manages to make a devastated Earth look serenely beautiful which when paired with cinematographer Claudio Miranda’s panoramic sweeps of the Icelandic location shoot make Oblivion one of the best looking film of 2013.

Yet, the script tries too hard to explore some heavy themes such as the nature of memory and identity. The film doesn’t explore them enough to make this film come off as something heavy sci-fi like Solaris. It just teases the audience enough to start a spark that could lead to conversations afterwards. The action that does punctuate the more introspective sections of the film does come off quite well despite coming only few at a time and not for any extended length.

What seems to hold the film together outside of it’s visuals would be the performance of the cast which sees Tom Cruise doing a very workman-like performance as Jack. We’ve seen him do this sort of performance time and time again that it seems to be second-nature to him by now and something audiences come to expect now. Even Morgan Freeman as an aged resistance fighter lends a bit of serious gravitas to the film whenever he’s on-screen. But it’s the performances of the two female leads that sells the film despite it’s flaws. Olga Kurylenko has less to work with in the role of Jack’s mystery woman Julia. What she does get she does so with a level of empathy that instantly sells the notion that Jack and her were destined to be together despite the vast gulf of time and space.

The stand-out performance comes from Andrea Riseborough as Jack’s lover and partner Victoria. Where Jack comes off as restrained chaotic glee who marvels at the sight he sees every day he’s out on patrol the opposite is Victoria. Her organized and reserved demeanor comes off as sexy in a cold and calculated way, yet just behind that British reserve we see glimpses of her hanging on by a thread at the chaos she sees in Jack. Andrea Riseborough plays Victoria so well that every scene she’s in she steals it from Cruise. Her performance was all about slight changes to her body movement, a quick glance that speaks volumes of what she’s thinking. While this film may not make Riseborough an outright star it will get her noticed by other filmmakers soon enough.

With the summer blockbuster season of 2013 coming closer like a freight train with the approach of Iron Man 3 it’s a good thing that Oblivion was released weeks before this hectic season. For despite it’s flaws in it’s script and the lack of originality in it’s premise the film does succeed in being entertaining and thought-provoking enough that people should see it on the big-screen. Plus, nothing but the massive screen (especially IMAX) does full justice to some of the vistas shot of Iceland that doubles as devastated Earth. So, while Oblivion may not be the slam-dunk hit for Kosinki after failing with Tron: Legacy it is still a film worth checking out.