Seriously, it’s in black-and-white and it’s about dancing.  How can you not be excited? 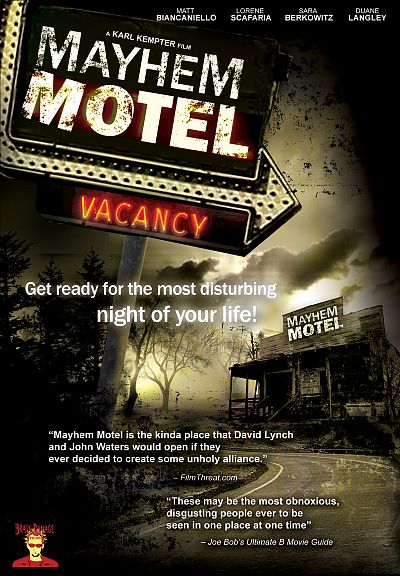 Don’t get me wrong, folks — by and large I kinda like Bates Motel, and I certainly enjoy reading Lisa Marie’s write-ups on each episode here on TSSL, but let’s not kid ourselves —- that show is a soap opera less- than- cleverly-concealed beneath some standard horror genre trappings. You can, of course, say the same for The Walking Dead, another show which I also dig for the most part, but it’s high time we stopped pretending either of these were anything but — well, crap. Enjoyable crap, sure, but crap nonetheless. And I’m certainly not above enjoyin’ me some crap.

Writer/director Karl Kempter’s 2001 shot-on-video offering Mayhem Motel, for instance. This is most definitely crap — hell, it’s even weird crap, disgusting crap, nauseating crap (less than five minutes into the proceedings a character billed in the credits as “Pukey” throws up in a bathtub — for real — and then proceeds to sit down in his own regurgitated mess), but then, it never pretends to be anything else. There are no affectations  here toward “quality character drama,” Kempter isn’t fooling himself that his film has anything “important” to say, and in fact there’s no real story here to speak of at all, just a series of vignettes centered around a bunch of degenerate fuckwads and various other products of the gene pool’s decidedly shallow end who all happen to be staying (perhaps at the same time, perhaps not — it’s never made clear and frankly doesn’t matter anyway) at the same fleabag motel.

I don’t know about you, but I find that refreshing lack of anything even remotely approaching an agenda to be a strangely noble thing. 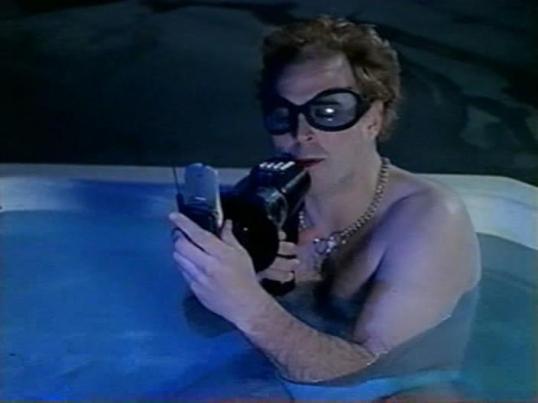 It also means that Mayhem Motel  is both a difficult movie to explain, and an easy one to review — plot recaps are completely unnecessary since there literally is no plot, but at the same time simply saying “you’ve really just gotta see it and decided for yourself” sounds like something of a cop-out, even though — well, you really do just gotta see it and decide for yourself. There’s definitely not much of anything resembling a “point” to be taken away from this at-times-self-consciously-weird-for-its-own-sake string of mish-mashed, completely unrelated events — apart from maybe some vague overall suggestion that sex with strangers can get ya killed — and most (okay, all) of the scenes seem more designed to provoke some sort of visceral reaction (even if it’s only “okay, what exactly was that all about?”)  from the audience rather than actually involving you in them, but what the hell — it certainly makes for a one-of-a-kind 70-minute viewing experience.

What I can’t say with any certainty, however, is whether or not it’s actually a good one — that’s up to you. The movie’s a mass of contradictions — I mentioned that’s it’s both unpretentious and self-consciously-weird-for-its-own-sake, and trust me, both are true — but the acting (roughly half the parts are played by a guy named Matthew Biancaniello, the other almost-half by a woman named Sara Berkowitz) is of a generally high standard for this type of production (i.e. one shot for a reported $22,000), the lighting is uniformly interesting (if not uniformly effective), and in between the midget, the floating plastic Easter eggs, the guy with a tracheotomy, and the blow-up rubber fuck doll, Kempter really does succeed in creating both a sleazy and genuinely otherworldly atmosphere here. And besides, we ll know that most people will do just about anything for money, but seeing what they’re willing to do for no money is so much more interesting.

So yeah — it’s fair to say that Mayhem Motel does what it sets out to do, I just can’t say whether or not what it sets out to do is really worth doing. That’s a purely subjective call, and while I enjoyed it for what it was, I can certainly see why some folks might turn this off a few minutes after the opening credits. I’m not prepared to say this is one of those things you’re either gonna absolutely love or absolutely hate — like, say, White Castle hamburgers — since I don’t see it as being able to elicit strong reactions along either of the emotional poles like that, but you’re either gonna find it interesting or completely pointless.

Or, perhaps, both interesting and completely pointless.

Mayhem Motel is available on DVD either as a stand-alone release from Brain Damage films (I can’t speak to its technical specs or any extras on that version as I haven’t seen it), or as part of the “Decrepit Crypt Of Nightmares” 50-film, 12-disc box set from Pendulum Pictures, the Mill Creek sub-label that specializes in zero-budget indie and homemade horror. That’s how I caught it and it’s presented full-frame with fairly lousy stereo sound (something of a surprise since Kempter apparently makes his living as a sound mixing guy on various other projects) and no special features or other frills of any sort. Considering the whole package retails for no more than twenty bucks, whaddaya want, anyway? I’d say give it a go if you’re feeling adventurous —  beyond that, you’re on your own.