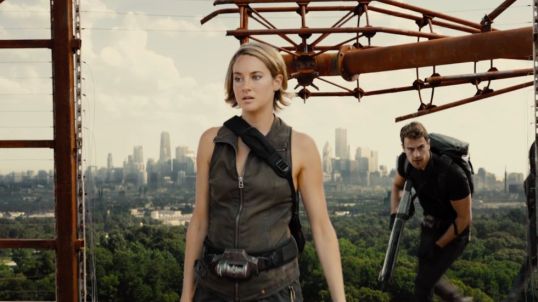 I really hate to start my review with such a negative statement but seriously, after watching Allegiant today, I am now convinced that the Divergent movies are perhaps the least interesting film franchise since the Paranormal Activity sequels.  Not only are the films so derivative of The Hunger Games that I’m always surprised that Donald Sutherland isn’t lurking around in the background but they’ve also managed to waste the talents of some of the best actors of my generation.  When you’ve got performers like Shailene Woodley and Miles Teller at your disposal, there’s no excuse not to be interesting.

I watched Allegiant with my BFF Evelyn and I’ll admit right now that we talked throughout the entire movie.  We laughed at the most serious of moments.  When Jeff Daniels showed up, we had a very long discussion about how, when he’s good, Jeff Daniels is really good but when he’s bad, he manages to come across as being the most boring man on the planet.  When Miles Teller betrayed his allies, Evelyn said, “Again!?” and then she had to remind me that Miles Teller always ends up betraying everyone in every Divergent film.

(It makes you wonder why the Tris (played by Shailene Woodley) and Four (Theo James) always bring Miles Teller with them as opposed to just killing him.  I suppose some of it might have to do with the fact that he’s Miles Teller and he’s a badass.  In fact, he probably should be playing Four.  He certainly has more chemistry with Shailene Woodley than Theo James does.  In fact, Theo James always looks like he’d rather be doing anything other than appearing in another goddamn Divergent film.)

And yes, Evelyn and I did get a few dirty looks from some people in the audience but you know what?  I fully understand that it’s rude to talk through a movie but oh my God, we had to do something.  Allegiant is such a boring movie.  The film moves slowly, as if the filmmakers don’t understand that everyone in the audience has seen enough YA adaptations to already know everything that’s going to happen.  If you want to truly understand what film critics mean when they say that a film is “draggy,” try to watch an entire Divergent film without standing up to stretch your legs or get something to drink.  Perhaps the biggest mistake you can make while watching Allegiant is to actually concentrate on what’s slowly playing out on screen.

The Divergent films aren’t terribly complicated and yet, I always find myself struggling to follow them.  They’re so bland and forgettable that I can never remember what happened in the previous film.  As Allegiant started, I was like, “Why is Naomi Watts in charge of Chicago now?  Oh yeah, Kate Winslet did die at the end of the last movie!”  And then I remembered that Evelyn was Four’s mother.

And then my BFF Evelyn (as opposed to the film’s Evelyn) said, “Four is a stupid name,” and I started laughing way too hard.  In fact, we made many jokes about Four’s nickname and then eventually, I remembered that he was called Four because he only has four fears.  But it took me a while to remember and, once I did remember, I couldn’t help but think about how stupid a backstory that was.

Anyway, the plot of the film is that the movie’s Evelyn is now in charge of Chicago but she’s turning out to be just as bad as the system that she’s replacing.  So, Tris, Four, and friends escape from Chicago and explore the barren landscape that surrounds the city.  Eventually, they are found by the Bureau of Genetic Welfare.  The Bureau is headed up by a boring guy named David (Jeff Daniels).  At first, David seems to be a good guy but then it turns out that the Bureau was behind the whole Faction experiment.  And now the Bureau wants to attack Chicago, wipe the slate clean, and start the experiment all over again.

Will Four and Tris go along with David’s plan or will they try to stop him?

At this point, who cares?

The thing that’s annoying about the Divergent films is that the storyline has potential.  At the heart of it all, the battle between the Factions and the Factionless has the potential to be a powerful, if simplistic, metaphor.  But the films are so plodding and take such an obvious approach that most of that potential is wasted.  Add to that, Shailene Woodley is a great actress.  In fact, I think it can be argued that she actually has more range than Jennifer Lawrence.  (Just check out her performance in The Spectacular Now.)  But the franchise has never known what to do with her uniquely off-center style.  Instead, it simply gives her speeches that feel as if they’ve been lifted from every other dystopian YA franchise.  The films insist on trying to make Shailene Woodley predictable and she deserves better on that.

As is typical of big franchise films nowadays, Allegiant is just part one of the Divergent finale and even the “to be continued” ending feels annoying because it’s so obviously lifted from every other franchise finale that’s ever been produced.  As with all the Divergent films, Allegiant never escapes the shadow of The Hunger Games.  The best that can be said about this franchise is that it will be over soon.  Hopefully, Shailene Woodley will be able to move onto a film more worthy of her considerable talents.