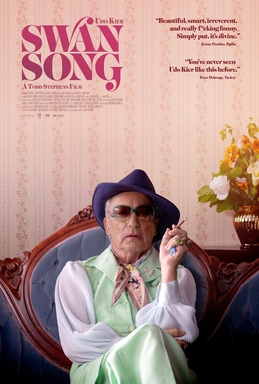 Once upon a time, Pat Pitsenbarger (Udo Kier) was one of the most important citizens of Sandusky, Ohio.  He was the town’s leading hairdresser.  He was the man who the wealthy trusted with their appearance.  When he wasn’t cutting hair, he performed drag as Ms. Pat and when he wasn’t cutting or performing, he built a nice home with his partner.  He often remembers the two of them working in the garden.

All of that is in the past, though.  Pat’s partner died years ago and Pat was reminded of his place in the community when some of his wealthiest clients didn’t even bother to come to the funeral.  Pat lost his business.  He lost his home.  He’s spent the past decade or so living in a nursing home.  Pat may be the best-groomed and best-spoken resident of the nursing home but he’s still definitely a man who is waiting for death.

One day, a lawyer shows up at the home and informs Pat that one of his most faithful clients, Rita Parker Sloan (played by Linda Evans), has died.  Rita had one last request.  She wanted Pat to do her hair and makeup for the funeral.  At first, Pat is hesitant.  His memories of Rita are not particularly pleasant.  But finally, he decides to do it.  He escapes from the nursing home and starts to walk to the funeral home.  To do Rita’s makeup, he’s going to need supplies, some of which haven’t even been existed since the 80s.  Unfortunately, he has no money and, as he soon discovers, his old home no longer exists either.  The world has changed.

As quickly becomes clear, there’s more to Pat’s journey than just wanting a final chance to do Rita’s hair.  As he walks through the town, he tries to reconnect with his past, just to discover that much of his past has been torn down.  His old beauty shop is under different management.  His old house has been torn down.  Few people seem to remember or recognize him.  One of the few people who does remember Pat is his former protégé, Dee Dee (Jennifer Coolidge), who now basically hates his guts.  Meanwhile, Rita waits in the funeral home, her hair and makeup a mess.

Released last year, Swan Song is an imperfect but ultimately touching movie.  The shadow of death hangs over almost every scene.  It’s not just that Pat is doing one last favor for the deceased Rita.  Nor is it just that Pat is haunted by memories of his dead partner.  (The scene where Pat visits his grave is one of the most effective in the movie, thanks to Kier’s heartfelt performance.)  It’s the fact that Pat himself knows that he’s getting older and he only has a certain amount of time left.  His walk across Sandusky is not just about traveling to the funeral home.  It’s also his final chance to see the world, remember the past, and experience how things have changed (or not changed as the case may be).  The journey is about Pat coming to terms with his anger, his sadness, and his past.  It’s also about Pat’s desire to go out the same way that he’s always lived, on his own terms.

As I said, it’s not a perfect film.  There are a few scenes that threaten to get a bit mawkish.  But even the most overwritten scenes are saved by the brilliant lead performance of Udo Kier, who gives a wonderfully complex performance as Pat.  Since the 70s, Kier has been a mainstay in European exploitation cinema.  He stared in Flesh For Frankenstein and Blood For Dracula.  He had key supporting roles in two Dario Argento films.  He appeared in art films, horror films, dramas, comedies, and thrillers.  He’s appeared in blockbusters and small indie films.  At times, it can seem like Kier is one of those actors who basically accepts anything that’s offered to him, regardless of whether the material is worthy of his talents or not.  Kier has appeared in good films and bad and, perhaps because he’s been such a ubiquitous cinematic presence, he’s often been unfairly taken for granted as an actor.  In Swan Song, Udo Kier gives one of his best performances as the sometimes brutally snarky but ultimately kind-hearted Pat Pitsenbarger.  If for no other reason, watch this movie to appreciate the often underrated talent of Udo Kier.  A lesser actor would have turned Pat into a cliché.  Udo Kier transforms Pat into a complex and rather heart-breaking character.

It’s time for me to do my monthly Oscar predictions.  Again, as I’ve said in the past, the majority of these predictions are based on a combination of instinct and wishful thinking.  However, the picture may become a bit clearer as early as the end of this week.  With the Venice and Telluride film festivals right around the corner and Toronto also swift approaching, critics are finally going to get a chance to see some of the contenders and, as the early reviews come in, it should be easier to pick the probable nominees from the also-rans.

Personally, I will curious to see how people react to Jane Campion’s The Power of the Dog.  Among the other possibilities that we’ll be hearing about: Spencer, King Richard, Dune, The Lost Daughter, The Last Duel, and Belfast.

If you’re curious to see how my thinking has developed, check out my predictions for March and April and May and June and July!

Joel Coen for The Tragedy of MacBeth

Denzel Washington in The Tragedy of Macbeth

Lady Gaga in House of Gucci

Andrew Garfield in The Eyes of Tammy Faye

Kirsten Dunst in Power of the Dog

We’ve seen the future and wow, there’s a lot of trash.

Seriously, that’s the main thing that I’ve noticed about movies set in the future.  No one ever picks up after themselves.  You would think that we’d have robots cleaning and polishing every inch of the Earth but apparently, WALL-E was a lie.

Even with that in mind, though, I still cry every time that I watch WALL-E.  Damn, that’s a good movie.  It totally should have been nominated for Best Picture.  Between that and not nominating Three Identical Strangers for Best Documentary, I don’t know what’s wrong with the Academy….

Anyway, this song appears on the soundtrack of a movie and no, it’s not WALL-E.  Instead, it’s from Alita: Battle Angel, which was written and produced by James Cameron and directed by Robert Rodriguez.  The movie’s coming out this February and maybe it will replace the Valentine-shaped hole that’s been in our soul ever since the Fifty Shades trilogy came to an end.

Or maybe not.  I just hope it’s good!

Anyway, the video is a party in a futuristic rubbish heap.  I don’t suggest trying this in your own neighborhood landfill.  Party clean, everyone.