The last three or four days and with many more to go, site co-founder Lisa Marie has been reviewing many films the depicts high school as seen by it’s many filmmakers down the years. While this particular major series of reviews is the creation of Lisa Marie and one she’s determined and enthusiastic in completing I thought I might drop by the proceedings and pop my head in quickly.

I don’t have a high school-themed review, but I do have the latest “AMV of the Day” that loosely follows the theme of high school. This time around the AMV is about a group of high school students in a futuristic Japan who also happens to be pilots of giant mechas (piloted robots) called Evangelions. Yes, I know it’s a very loose and barely there tie-in to Lisa Marie’s “Back to School” series, but who wouldn’t want to be a high school student and also be the pilot of giant Evangelions while wearing some fashionable plug suits. I mean the Evangelion anime is not just about mecha fighting monstrous angelic beings, but also has all the angst and growing pains of being a high school age teen.

The video’s creator, LuftPyrite, does a great job of marrying scenes from Evangelion: 2.0 You Can (Not) Advance with the Accent8 Remix of Ellie Goulding’s very popular and recognizable song “Lights”. While the video itself does end very abruptly it still doesn’t diminish just how good this video is from start to abrupt finish.

Anime: Evangelion: 2.0 You Can (Not) Advance

I still have a couple more winning AMV’s from this past Anime Boston 2014, but for now I think the latest entry to the “AMV of the Day” comes courtesy of Sakura-Con 2014. It’s another AMV using the time tested 30 Second To Mars song, “This Is War”.

For some reason this song remains a steadfast favorite amongst people who make anime music videos and it’s not hard to see why. It’s got a nice tempo and beat that goes well with many shounen anime. This time around it’s used for the video that won “Best Action” in this year’s Sakura-Con AMV contest. The creator of the video is one TheMFJuggernaut. With the popularity of the anime series Kill la Kill it’s always great to see people continue to take interest in Tengen Toppa Gurren Lagann which was animated by Gainax animators who would later form the animation studio Trigger. The animation studio which gives Kill la Kill it’s look that reminded many people of Tengen Toppa Gurren Lagann.

One fun thing about this video is how it shows how over-the-top the series got when it came to it’s mecha design. They didn’t know the meaning off “too big”.

It’s been a month since Anime Boston 2014 and I’ve decided to put up the third AMV to win one of the categories from the con.

This particular AMV won the Romance category and for once it uses an anime that I’m not familiar with, but after watching the video I’m definitely looking forward to checking it out once the blu-ray comes out sometime this year.

The AMV in question is “Strangers Like Us” by davenfonet who uses the Phil Collins song of the same title and the mecha series Gargantia on the Verdorous Planet. The video itself doesn’t go for the usual ballad-like tone, but instead goes for a much more fun romance vibe that doesn’t seem to win many Romance category contests. This time this type of romance AMV wins and the fact that it makes me want to watch the series after never having heard of it til Anime Boston means the creator succeeded.

Anime: Gargantia on the Verdorous Planet 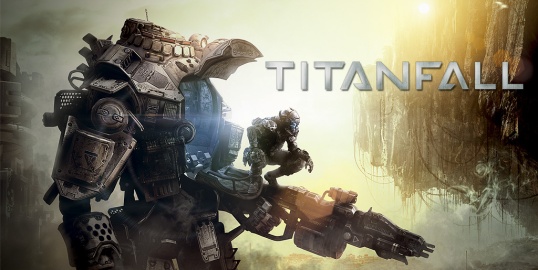 Titanfall is really turning out to be one of my most-anticipated game titles of 2013.

It’s the very first title for Respawn Entertainment. A studio made up of the people who first created the Call of Duty studio, Infinity Ward, and who ended up being fired (or leaving to follow their fired leaders) by the powers-that-be who held sway over Activision. There was talk about whether Respawn Entertainment would ever get a chance to show Activision and it’s detractors that they still had what it takes to succeed in the first-person shooter market dominated by three titles (Call of Duty, Battlefield and Halo).

Titanfall looks to dispel such notions first with a triumphant return to this summer’s E3 where they revealed the title to everyone to much acclaim. Now we got to see more of the gameplay itself both in mechanics and graphics at this past week’s Gamescom 2013 over at Cologne, Germany.

The gameplay trailer pretty much dispelled whatever doubts I might have had about this title and now has my money ready to be exchanged for it when it comes out for the Xbox One (for some on the PC or Xbox 360) in early 2014.

In honor of GLaDOS’s cameo in Pacific Rim as the A.I. voice of the American Jaeger, Gipsy Danger, I’ve chosen an oldie, but goodie AMV from 2008 as the next “AMV of the Day”.

This has to be the very first AMV I’ve ever seen and it was in the spring of 2008 when I attended my very first anime convention with Anime Boston 2008. The video had won Best In Show and Best Drama. It used scenes from the very popular mecha anime Neon Genesis Evangelion, but more important to the convention attendees was the song used for the video: Jonathan Coulton’s “Still Alive” featuring the voice of GLaDOS herself, Ellen McClain.

“Let Them Eat Rei” was the name of the video and it does a great job in combining some of the dark humor from both the song and the anime, but also it’s more darker dramatic aspects. When I think about it I’m not even sure if this video had won Best Drama or Best Comedy, it could’ve won either in addition to Best In Show.

Ok, to say that my latest musical obsession comes directly from Pacific Rim shouldn’t be quite a surprise. I’ve been so hyped about Guillermo Del Toro’s valentines card to all things mecha and daikaiju that it is only logical that it should progress right to it’s soundtrack. The latest “Song of the Day” is the awesometastic and auralgasmic opening theme song to Pacific Rim composed by Game of Thrones composer Ramin Djawadi featuring the lead guitar stylings of Rage Against the Machine’s Tom Morello.

The “Pacific Rim Theme” is quite the homage to the classic mecha and giant robot anime series of the 70’s and early 80’s. It doesn’t go for the recent trend of classical-based opening credits song with the latest mecha series from  Japan, but it instead goes for the full-on rock’n’roll treatment. It’s mostly brass and strings with some cameos from the horn section. It also makes great use of the electronic style that evokes early John Carpenter and some of the scifi action films of the early 80’s.

It helps to have Tom Morello of Rage Against the Machine doing lead guitar duties throughout the piece.

In the film, the Jaeger pilots were seen as rock stars by the public and this theme made damn sure that we know that when it plays out in the beginning. 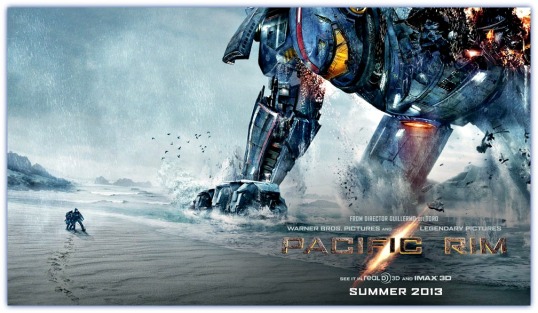 July 12, 2013 will be the date that will go down in otaku history when anime and live-action finally come together to prove that dreams of a live-action versions of some of the most beloved anime titles can work outside the animator’s studio. Guillermo Del Toro may not admit it but this Wonder-Con exclusive trailer for his upcoming Pacific Rim is chock full of anime influences.

Humanity brought to the brink of extinction and living in fortified cities: CHECK

It sounds like the basic outlines for anime of the past 30 or so years. There’s a bit of Neon Genesis Evangelion. There’s definitely a healthy dosage of the Mazinger Z DNA in this film. We can’t forget the classic Voltron that introduced many young people in the West in the 80’s to the joy of ultra-violent anime. Outside of anime there’s the Ultraman versus  kaiju live-action Saturday serials that continues to be popular in Japan to this day and was a staple of any growing boy’s entertainment agenda on Saturday mornings.

Whether this film lives up to the hype it’s been gaining since the first teaser was shown late last year is still an unanswered question, but for fans of action anime this film looks like a love-letter to us and everyone else should just hang on for the ride whether they want to or not.

Plus, for those not steeped in otaku culture it has something for you as well: Jax Teller, Luther, Clay Morrow and Charlie “Kitten Mittens” Kelly.