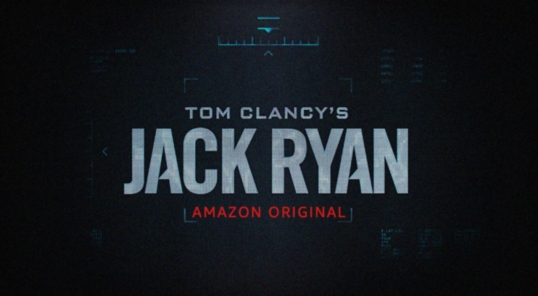 There are two types of streaming television series: Get a sitter and watch in rapt silence with your SO and friends and Elliptical and/or Hangover Television.  Jack Ryan is in the latter category.  It’s a solid: NOT BAD.   Ok, it was a little weird seeing Jack Ryan (John Krasinski) put Osama Bin Laden’s AK-47 in a Jello Mold, but I thought it was a nice call back.  JK!

Jack Ryan has been a staple for nerds who like action for decades.  Jack Ryan is a data analyst badass who defeats terrorism and rogue commies, in other words, fictional.  He’s been in countless books, films, and video games.  The only other character that gets this much media has to use The Force.  In this iteration, Carlton Cuse of “Lost” fame takes a crack the characters.

Jack Ryan is a young Marine Vet turned CIA officer with PTSD.  He is teamed up with Greer who in the books and previous iterations was a tough talking Admiral with shitty dialogue; whereas, in this version, Greer’s a down and out muslim CIA officer whose career is in decline after killing a Pakistani asset.  They are on the hunt for the big bad: Sulieman.

Sulieman is the product of the American intervention in the Lebanese civil war in 1986, which…checks out.  He is hell bent on causing all kinds of mayhem in America and abroad.  They make a big show about how he was treated badly throughout his life-  Boo hoo.  I guess it was supposed to make him more human. I thought it made him really really whiny.  So what, you didn’t get your dream job that gives you the right to blow everybody up?!

The big question most of my readers have: Did John Krasinski – Jim- have a passable performance as a super spy?????  KINDA. He was pretty close at times, but was he held back by some purposely slowed down plot points.  I will get to the derpy derp moments later, but really the season should’ve been 6 episodes instead of 8 because there were too many contrivances, which inhibited John’s performance.  I have to write that he was in fact believable.   I did not know what to expect, but he delivered a good performance.

What they got right:

Sleepless nights with PTSD and drinking too much.  They portrayed that spot on.  I thought, I’ve had those late nights.  Ok, Pass!

The SEAL/Ranger team: I’ve known many Special Operators over the years and they are all real salt of the Earth types.  They played those matter of fact tough guys perfectly. Ok, Pass!

The director building suspense? Yep, the direction was done quite well.  No complaints.

1.  They portrayed Jack Ryan as dealing PTSD, giving him pause to shoot his weapon.  I get that, BUT he’s still a Marine.  There’s a scene where he makes the decision to shoot and misses by a mile just so they could have fight scene later.  This is just dumb.  Marines are ALL crackshots.  If you are in a Marine’s line of fire and he’s got a clear shot, you’re dust.  When you see it, you’ll roll your eyes.

2.  There’s a terrorist strike by Sulieman and he claims responsibility.  They show his face being plastered on all television networks. He’s on tv more than Anderson Cooper. Then, with no face disguise, he’s NEVER recognized.  We’re not talking just one time, but FIVE times at least.  His face would’ve been burned in everyone’s memory.  It was just dumb,  lazy, and contrived to keep the villain the in the action.

3.  A CIA Officer meets Sulieman’s wife and he just lets her walk away the same day as a major terror attack: NFW! Anyone who said that they knew an Osama equivalent would be sequestered and interrogated immediately, but it was obvious that they needed to pad the plot to squeeze three unnecessary episodes for story arc.

4.  There’s a duo who are drone pilots that are just sort of shoehorned into the story for no reason at all.  I couldn’t even figure out the message if drones were supposed to be good or bad.  I left thinking… Man, drones work really well.  Then, one of the drone pilots gets all guilty about a mistargeting incident and flies to Syria because ya know Active Duty Soldiers just get to go anywhere they like on leave…. NFW!!!!!!! Just think about it…we shouldn’t just get to go wherever we like.  It’s dangerous for us and could lead to a Soldier getting compromised.  NFW!

5.  There’s a plot point where a doctor becomes aware of a biological threat and just sends an email.  WHAAAA?!  She would be calling everyone and their brother to report that because she’s supposed to be smart.

Is it worth watching?

Yes, yes it is.  It’s got real problems in terms of story holes, but my hope is that Carlton Cuse learns from this.  He can DM me if he likes.  I’ll consult or script doctor for a very reasonable rate.  Jack Ryan is great for watching on the Elliptical at the gym or if you’re hungover or something.  It is NOT at this time get a babysitter and everyone be quiet television, but it is …. fun.