Critics in 1976 were divided over Alfred Hitchcock’s FAMILY PLOT, which turned out to be his final film. Some gave it faint praise, in an “it’s okay” kinda way; others decried it as too old-fashioned, saying the Master of Suspense had lost his touch – and was out of touch far as contemporary filmmaking goes. Having recently viewed the film for the first time, I’m blessed with the gift of hindsight, and can tell you it’s more than “okay”. FAMILY PLOT is a return to form, and while it may not be Top Shelf Hitchcock, it certainly holds up better than efforts made that same year by Hitch’s contemporaries George Cukor (THE BLUE BIRD), Elia Kazan (THE LAST TYCOON), and Vincente Minnelli (A MATTER OF TIME).

Hitchcock reunited with screenwriter Ernest Lehman (NORTH BY NORTHWEST) to concoct a devilishly clever black comedy about phony psychic Blanche Tyler who, along with… 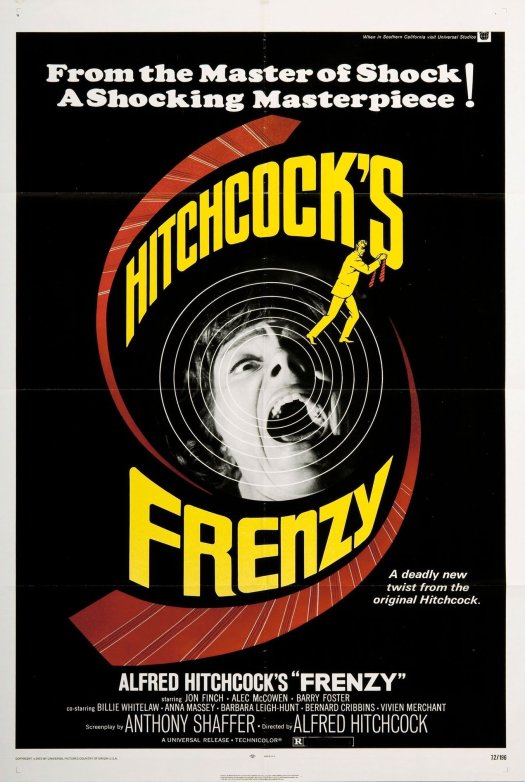 Alfred Hitchcock’s  previous two films, TORN CURTAIN (1966) and TOPAZ (1969) weren’t well received by critics, who claimed The Master of Suspense was too old-fashioned and had lost his touch. One wag even suggested that, after fifty years in films, it was time to put Hitch out to pasture! But Hitchcock wasn’t quite ready for a life of tea and crumpets in the garden, and came back with 1972’s FRENZY, complete with all the blatant sex, nudity, gore, and profanity of other early 70’s auteurs, proving he could not only keep up with the times, but surpass them by giving us the blackest of horror comedies.

Hitchcock had returned to his native England before to make a few films, but always with actors who had box office appeal in America (Ingrid Bergman and Joseph Cotten in UNDER CAPRICORN, Marlene Dietrich and Jane Wyman in STAGE FRIGHT). This time around, he… 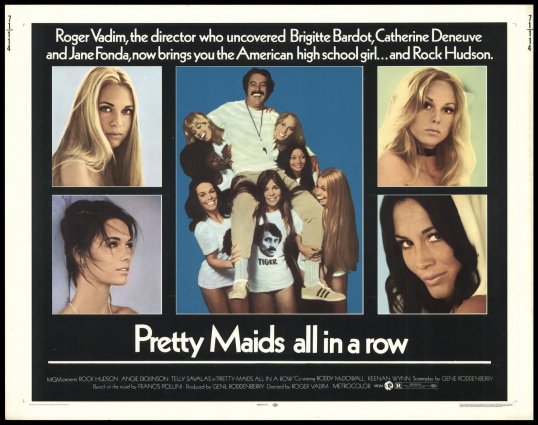 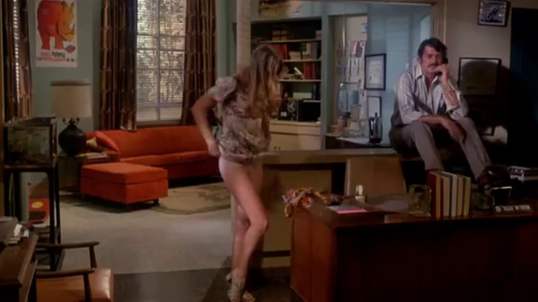 All-American hunk Rock Hudson was in the middle of a career crisis himself. After spending years as Doris Day’s paramour in a series of fluffy comedies, his box office clout was at an all-time low. Taking the role of Tiger McGrew, the guidance counselor/football coach whose dalliances with the cheerleading squad leads to murder…

Preacher the comic book that came out in 1995 and became the title that everyone gravitated to to balance out all the superhero titles that were coming out from Marvel, DC, Image and every small publisher in-between. The book was written by Garth Ennis and drawn by Steve Dillon. It was the book that took on the institutions of the Church, government and family in the most irreverent and blasphemous way one could think of at the time.

The book had been talked of within Hollywood since it’s release as one title that producers (seems all of them at one time or another) wanted to adapt for the big-screen. It wasn’t a superhero title so there was no need to worry about trying to adapt tights-wearing heroes and villains. Yet, the book’s subject matter which tended to go into the extreme at times became something that kept the title from being adapted.

After almost two decades of futile attempts to get Preacher up onto the big-screen it took the star-power of one big-screen star (Seth Rogen) to finally get the book adapted, but not on the big-screen, but on the small-screen to become part of AMC’s stable of unique series titles (The Walking Dead, Better Call Saul, Into the Badlands).

So, fans of the books only have until 2016 to wait for their dreams of Preacher finally coming to live-action life and non-readers will finally see what all the hype has been all about.


Michael Peña was, for me, a major highlight in the recent Marvel Studios film, Ant-Man. His role as Scott Lang’s former cellmate and buddy once out of San Quentin was the linchpin of the film’s comedy side. Michael Peña has had quite a string of very good work on the dramatic side of things (End Of Watch and Fury), yet he has also done some great comedic work.

One great comedic turn comes from the little-seen, but very funny dark comedy, Observe and Report. This film has earned a negative reputation due to one scene between Seth Rogen’s character and that of Anna Faris. But that’s a scene that doesn’t bring me back time and time again to watch this cult classic in the making.

Michael Peña’s character is a fellow shopping mall security guard by the name of Dennis Shavante and he’s sort of the right hand man to Seth Rogen’s bipolar Ronnie Barnhardt who also happens to be a fellow security guard. Peña’s scene in the middle of the film right before he takes Ronnie under his wing was one of the funnier monologues I’ve watched on the big-screen in many years. The follow-up postcard narration later in the film just became the icing on that monologue’s cake.

Here’s the postcard monologue to make it easier to understand one Dennis Shavante.

Dennis Shavante: Whatsup mo’fackle? How’s your dick hanging? Low I hope. I just wanted to write you and say that, you know I really am sorry for the way shit like went down and stuff, my bad, my blunder. I just wanted you to know that you really are my best friend. Problem is I’m a criminal man who doesn’t care and your crime is… you care too much. Regardless of our differences, I hope you know that I always respected you. It’s not every day that you meet someone who stands for something in this world. Anyway, no hard feelings okay, but if you ever want to party, just get your ass to Mexico, the beers are cool and the girls are wet.

Once in awhile we come across a little film that we would never have bothered to even check out if not for the reach of the interwebs.

One such film is the Australian black comedy thriller Kill Me Three Times which had a screening at 2014’s Toronto International Film Festival. It stars Simon Pegg (channeling his inner Sean Connery mustache by way of Zardoz), Teresa Palmer and Callan Mulvey.

From the red band trailer it looks to be quite the violent little black comedy that Simon Pegg seems to be quite adept at. Interesting to note that this film will probably introduce the rest of the world to a third Hemsworth brother (they must clone them Down Under or something).