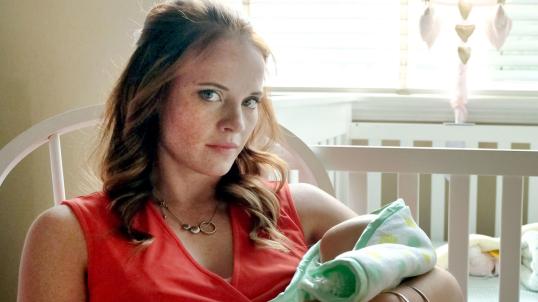 Because it was on Lifetime!

Plus, I loved that title.  A Mother Knows Worst!  I’m seriously hoping that, once this lockdown ends, I’ll run into a really obnoxious woman who is carrying around a baby so that I can snap at her, “A mother knows worst!”

Okay, so this is kind of a complicated movie and there’s no way for me to totally tell you what it was about without spoiling some of the film’s biggest twists.  So, I’ll just tell you what it pretends to be about while assuring you that there’s a few twists and turns that make this film a bit more interesting than you might think from just reading a rudimentary plot description:

Olivia (Kate Leclerc) and Brooke (Victoria Barabas) both gave birth on the same night.  According to the hospital, Olivia’s baby died while Brooke’s survived.  6 months later, Olivia’s husband, Harry (Jeff Schine), has a job working for Brooke’s husband, Glen (Todd Cahoon).  When Olivia sees Brooke’s daughter, she says that she felt an instant connection to the baby, a connection that Brooke feels that she has yet to establish.  While Brooke is happy with the idea of Olivia helping to look after her daughter, both Harry and Glen are concerned that Olivia may be forming an unhealthy obsession with Brooke’s daughter.

Meanwhile, there’s a murderer on the loose and….

Well, that’s all I can really tell you.  I know it sounds like a typical Lifetime baby kidnapping film but you’ll just have to take my word for it that it’s actually a bit more complicated than that.

This film was full of twists and turns!  Seriously, I love Lifetime film but it’s rare that they take me by surprise.  In fact, one of the appeals of the movies they show on Lifetime is that they tend to be predictable.  A Mother Knows Worst, however, had some pretty effective surprises and it definitely kept you guessing as to who could be trusted and who should be feared.

Katie Leclerc and Jeff Schine both did a great job playing Olivia and Harry.  In fact, the whole film was pretty well-acted.  Everyone did a good job of keeping the viewers off-balance.

I loved Brooke and Glen’s house!  That pool was to die for.

Unfortunately, towards the end of the film, there’s a lot of flashbacks and they tend to kind of bog down the film’s finale.  Though it’s a cliche, sometimes it’s best to just have the villain give a monologue explaining all of their evil deeds, especially when the other option is stopping all the action for a lengthy flashback.

Olivia had red hair just like me so, of course, I totally related to her and was on her side.  It’s a scary world out there and those of us blessed with the best hair color in the world have to stick together.

Take nothing for granted, not even the plot of the latest Lifetime film.

One response to “What Lisa Watched Last Night #210: A Mother Knows Worst (dir by Robert Malenfant)”