(Hi, everyone!  I’ve been cleaning out my DVR and reviewing the films that I’ve recorded.  Here’s my final review of the day.  I recorded The Rachels off of Lifetime on January 29th!) 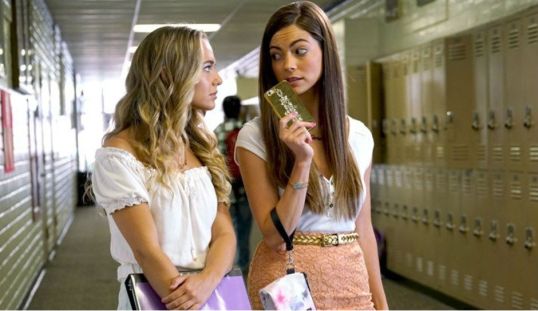 Don’t be put off by its origins as a Lifetime film.  Don’t judge the film just because the title was obviously inspired by Heathers.  How good is The Rachels?  It’s so good that I’m tempted to call it nifty.  That’s how good it is.

At a late night party, one of these three girls will fall off of the roof and plunge to her death, the result of an apparent suicide.  The film, in its non-linear fashion, holds off an immediately revealing which one of them fell from the roof and I will do the same.  What I can tell you is that the entire school soon becomes a shrine to the dead girl and the two survivors both use her death to their own advantage.  Both of them, by linking themselves to the now sainted dead girl, become very different types of celebrities.

It makes for a very sharp satire, one that perfectly skewers today’s culture of instant fame and internet grieving.  All three of the main actresses — Maidson Iseman, Caitlin Carver, and Daniela Bobadilla — are perfectly cast and give pitch perfect performances.  This is one of those films where no one turns out to be exactly who you thought they would be.  Well-written, well-directed, and wonderfully acted, The Rachels keeps you thinking and guessing.

That’s really all I can say about the movie without giving away too much.  Keep an eye out for it.

One response to “Lisa Cleans Out Her DVR: The Rachels (dir by Michael Civille)”