Of all my 2016 in review posts, this is probably going to be the most difficult for me to write.

Last year, when I tried to write about some of the good things that I saw on television in 2015, I started things by confessing that I hadn’t been watching as much television as usual and that I was having a hard time coming up with a worthwhile list.

Well, in 2016, I watched even less television than I did in 2015.  And what I did watch, I usually didn’t care much for.  2016 was dominated by that stupid presidential election and it didn’t take me long to discover that watching too much television would result in me having to sit through hundreds of political commercials.  When it came to watching television, I spent a good deal of 2016 clicking on the mute button.

Of course, I watched all of the reality shows, but even that was largely because I was contracted to write about them at the Big Brother Blog and Reality TV Chat.

I also spent a good deal of time watching classic films on TCM.  I live tweeted most of the movies that premiered on Lifetime and the Lifetime Movie Network.  I did the same during those rare occasions that a new movie showed up on SyFy.

But, beyond that, I found myself with less reason than usual to watch television.  Maybe I’m maturing.  Maybe my tastes are changing.  Maybe I’ve just grown bored with TV in general.  Or, perhaps, 2016 was just a really bad year.

Still, with all that in mind, here are a few good things that I saw on television in 2016!

The television event of the year!  I watched every episode and I was absolutely enthralled.  This brilliantly acted show is probably destined to be remembered as the only worthwhile project that Ryan Murphy was ever involved with.

2) Veep continued to be the most brilliant comedy on HBO.

I know that some people felt that Veep wasn’t as strong this season as it had been in previous seasons.  Well, those people can go to Hell.  Veep is not only a brilliant comedy but it’s also probably the most realistic political show on TV.  Considering the cult-like adoration that voters have for their candidates and towards the government in general, the unrepentant cynicism of Veep provided a much-needed wake up call to the brainwashed masses.

Without a doubt, this was the best campaign commercial of 2016:

The 2nd season of Agent Carter was just as wonderful, stylish, and empowering as the first.  Of course, the show as promptly canceled, leaving us with just a grand total of 18 episodes.

American Idol finally came to an end!  Don’t get me wrong.  Like a lot of people, I used to be enthralled by American Idol.  For the first few seasons, I watched every episode.  I voted nearly every week.  I got really emotionally involved.  But, especially over the last few seasons, American Idol was becoming more and more irrelevant.  It soon came to represent everything that people like me hate about cultural conformity.  Vote For The Worst ceased operations, leaving me without a safe place to talk about how annoying it was whenever anyone would use that Hallelujah song for an audition.  A steady stream of boring judges didn’t help either.  American Idol finally came to an end last season.  I watched the final episode.  I can’t remember who won.

Occasionally frustrating, sometimes infuriating, and often quite brilliant, Bates Motel remained one of the most consistently fascinating shows on television.

It may seem petty to describe a dramatic failure as being something good that I saw on television.  But, seriously, Vinyl was such a hubris-fueled trainwreck that it was impossible not to feel a little Schadenfreude as it fell apart.

According to Case, the life of a unicorn was saved when People of Earth was renewed for another season.  Yay! 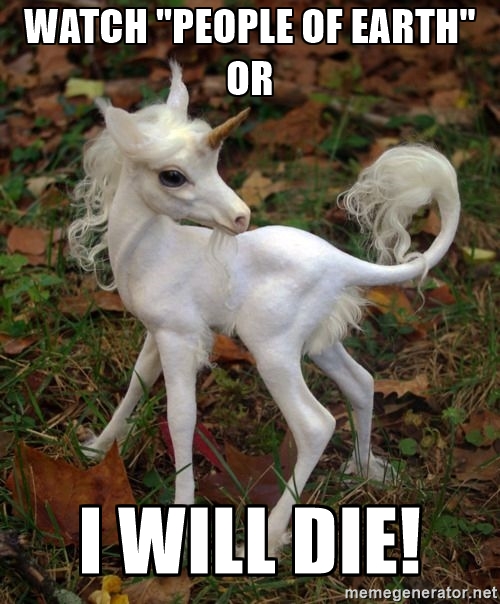 Tomorrow, I’ll continue my look back at 2015 with my ten favorite non-fiction books of the year!