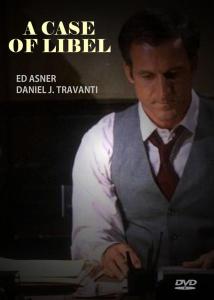 In the 1950s, at the height of the McCarthy era, no one is more feared than Boyd Bendix (Daniel J. Travanti), an acerbic, right-wing gossip columnist.  Anyone who crosses Bendix the wrong way runs the risk of being accused of everything from sexual deviancy to communism.  Bendix’s latest victim is prominent journalist named Dennis Corcoran (Gordon Pinset).  Unlike everyone else who has been bullied by Bendix, Corcoran refuses to quietly submit.  Working with a gruff but brilliant attorney, Robert Sloane (Ed Asner), Corcoran takes Bendix to court.

A Case of Libel was made for Showtime and it is very much the type of movie that was made for teachers to show in classrooms full of aspiring Clarence Darrows.  Adapted from a Broadway play, A Case of Libel is also based on the true story of a successful lawsuit that was brought against columnist Westbrook Pegler in 1955.  A Case of Libel is basically a filmed play but is memorable for the performances of Ed Asner and especially Daniel J. Travanti.

A Case of Libel is a movie that I used to rent, on VHS, from my local video store when I was just starting to get interested in politics.  Because it was a cheap production on a cheap tape, the picture always looked terrible but I still enjoyed it.  Despite what the picture above claims, it’s never gotten an official DVD release and it probably never will be since there’s not a huge demand for old Ed Asner/Daniel J. Travanti courtroom dramas.  If it ever does come out on DVD, I’ll buy it.

The world of NASCAR racing takes center stage in THE LAST AMERICAN HERO, a fictionalized biopic of legendary driver Junior Johnson. But this isn’t just a film about stock cars; it’s an extraordinary character study of a young man from the backwoods of North Carolina who discovers himself and what’s important to him. Jeff Bridges is outstanding in his first full-fledged starring role, demonstrating at age 24 the acting chops that have carried him to a long and prosperous film career.

Junior Jackson hauls moonshine for his Daddy on the winding backroads of  the Carolina hills, his tactics eluding the cops at every turn. He’s cocky and confident, and pisses the local law off so much they bust up Daddy’s still and send him back to prison. Junior decides to use his only marketable skill to raise money for the family while Daddy’s away – driving. He enters a demolition derby…

I don’t know about anyone else, but when I was a kid, teen, young adult, and now older adult, I’d often fantasize about being able to go back in time with a modern military and just be some kind of unstoppable juggernaut.  Imagine bringing a machine gun to the Revolutionary War, or even a trained sniper squad capable of picking off the enemy generals the minute they peeked their heads out of a door.  Well, what if a portal appeared in the middle of New York City and out poured an army, comprised of fantasy blend medieval times soldiers (orcs and dragons along with humans, but only armed with swords and shields and bows and arrows)?  No doubt there would be a good amount of civilian deaths in the first chaotic moments, but when the national guard would be mobilized, there’s little doubt that it would be a complete rout.  This is more or less the idea behind Gate, which came out in the later half of 2015. 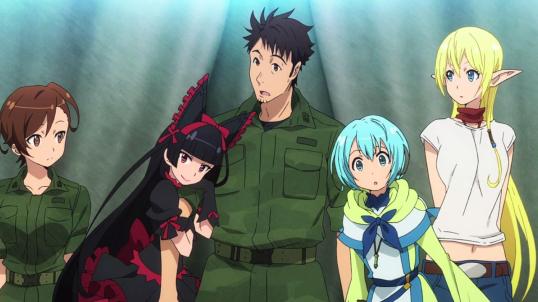 This is very much a “wouldn’t it be cool if…” sort of anime.  You just need look no further than the protagonist, Yoji Itami.  Our first encounter with him makes us believe that he’s your average, everyday otaku, in Ginza for a doujinshi event when the portal opens and the army from another world appears.  But he’s obviously more than your average otaku, because while everyone else is panicking, he more or less takes control and directs the civilians on where to go and tells the police pretty much how to do their jobs, even going so far as to kill one of the enemy soldiers in hand to hand combat.  We soon find out that he is an JSDF officer (Japan Self Defense Force, think National Guard because Japan hasn’t technically been allowed to have a military since WWII) and through the course of the show we find out that not only is this slacker a soldier, but he’s also gone through Ranger and Special Forces training.

Japan sends approximately a brigade sized force through the gate to the other side, where they set up their base.  Naturally, the native forces do not fully comprehend just how much a disadvantage they’re at until the Battle of Arnus Hill.

Following this slaughter, Japan proceeds to set up shop, and because they’re Japan and not the US, Russia, or China (these three nations are also shown here, as less than noble as one would expect from a show made in Japan) instead of moving to conquer the region, they strive to win the hearts and minds of the populace and seek a peaceful solution to the situation that the Empire has brought upon itself.  Needless to say, the Empire doesn’t exactly want to admit they’re beat and it takes many more displays of overwhelming might before they realize that they’ve made an enemy of a force that they just can’t win against.

Now, this would hardly be a “Wouldn’t it be cool if…” scenario unless the main guy was fawned over by half the females in the land, and sure enough he gets his harem in short order.  First him and his squad rescue an elf girl, Tuka Luna Marceau, whose village was wiped out by a Fire Dragon.  Immediately after he meets up with a young female mage, Lelei La Lelena, and then an immortal female demigod of war, Rory Mercury, who happens to have essentially stopped aging at the age of 16 or so.  She also seems to be the favorite girl for people to cosplay as, possibly because of her affinity to dress in gothic lolita clothes, and also because she’s just plain badass.  Later on his harem adds a dark elf and even a princess from the Empire, in addition to many lesser characters who are more than happy to fawn over him.  For the most part, while he’s not unaware of their interest in him, he is fairly ambivalent towards  their affections.

What really makes this show tick though is that while yes, it kind of is a love letter to the JSDF, and its primary purpose is to show off all manner of military hardware, there’s also a lot of political machinations going on behind the scenes.  A lot of it is showing how the Japanese bureaucracy can make even simple decisions take far longer than it should, although that is a problem with any sort of government really.  But it also shows how the rest of the major powers in the world, in this case the US, Russia, and China, would react if a country like Japan were to come across a vast, untapped resource like this world that can easily be dominated with our modern military might.  They were all too happy to let Japan test the waters and cross the gate first, but once it was found out that they were fighting bows and arrows with Abrams and Cobras, they too wanted to try and get a piece of the action.  The show is 75% military and 25% political, which gives it plenty of action, with some intellectual maneuvering thrown in to keep it all interesting.

Even though I enjoyed quite a bit of it, it does still have its faults.  Like 90% of all anime produced these days, it does suffer from the lack of a real ending.  It’s based on an ongoing series of light novels written by Takumi Yanai, so the ending is basically “Do you want to see more?  Maybe we’ll have another season, but otherwise go read the light novels!”  I’ve long come to accept that this is the way of the industry, but it still leaves you feeling unsatisfied.  Many of the plot threads that were left unresolved probably are being wrapped up as the light novels are written, but that doesn’t really help with the anime, which just kinda swept them under the rug and hoped you forgot about them.  There are also a few scenes that could very well creep some people out, most notably where a 12 year old noble girl becomes infatuated with one of the Japanese diplomats, and during the civil war in order to save her, he announces that she is his fiance, then continues to announce that he fully plans to marry her when she turns 16 (the age at which girls can marry without restriction in Japan).  It’s not being forced on her since she had long been saying she wanted to marry him, but it still reeks too much of otaku wish fulfillment and trying to appease the lolicon crowd.  I don’t have a huge problem with it since it’s all fictional, but it just seemed a bit unnecessary to me, and the story could have advanced just as easily if she were already of age.  It also tends to over glamorize the Japanese SDF, making them out to be nothing but the most humane people in the world.  Well, except when they’re slaughtering their enemies.  It’s kind of understandable, since Yanai is a former JSDF member, but it still kind of comes off as ignoring the faults of any military organization and making them out to be infallible knights of justice.

Still, at the end of the day, it left me wanting to watch more.  The likelihood of more anime being produced is probably low, while it did get a 24 episode run, the disc sales were decent but not stellar.  Unless it’s determined that the light novel sales could be boosted by another season, I don’t expect to get to see more of this in animated form.  Which is a shame, because it deserves a proper ending to one of the more interesting shows to come out in recent years.


It’s time to go back down the ABBA hole.

I thought I would jump to a pre-ABBA Frida video. This is a good decade before she would sing over music that might as well have been written by Ministry. Yep, that’s a thing that happens. Stop the video at twelve minutes and fifty seconds because it will go into another video.