We found out tonight that the great Sir John Hurt passed away at the age of 77.

For some their memory of him was in the role of the Elephant Man. For the younger set it might be as Hellboy’s adopted father Professor Broom. Some might even remember him as Chancellor Sutler from V for Vendetta. They were all great roles, but my very first memory of him is from a film that helped shaped my love for horror and sci-fi. It was a film that was influenced the impressionable mind of a pre-teen.

This film is and will always be Ridley Scott’s haunted house in space sci-fi horror film, Alien.

Sir John Hurt as the doomed crew-member Kane would make such an impact in my impressionable mind as a child not when he first appears on-screen, but when the titular creature makes it’s first appearance in what I can only describe as an explosive birthing scene.

Adrian (Jan-Michael Vincent) is a free-spirited hippie who has just been drafted into the Marine Corps.  As soon as he arrives at the boot camp, his long hair get shaved off and he immediately starts to get under the skin of Sgt. DePayster (Earl Holliman).  While Adrian scored higher than anyone else in the platoon on his aptitude tests, he is also a pacifist who refuses to shoot a gun and teaches all of the other draftees how to meditate.  DePayster wants to put Adrian in the Motivational Platoon, a disciplinary unit where Adrian probably would not survive.  Trying to protect Adrian while also trying to turn him into a killing machine is his drill instructor, Sgt. Drake (Darren McGavin).

Tribes has never been released on DVD/Blu-ray but it can be watched on YouTube.  Not surprisingly, for a movie that was made for television in 1970, there are some parts of the film that have not aged well.  I doubt a real drill instructor, even one who secretly draws pictures and admires Adrian’s rebellious spirit, would have put up with Private Adrian for as long as Drake does in this movie.  Again because of its television origins, the language has been cleaned up.  You won’t mistake this one for Full Metal Jacket.  On the plus side, Earl Holliman gives a good performances as the hardass sergeant and Jan-Michael Vincent shows why he was expected to be such a big star before he ended up becoming one of Hollywood’s greatest cautionary tales.  Best of all is Darren McGavin, who is even better as the tough but fair Sgt. Drake than he was in his two best known roles, the father in A Christmas Story and reporter Carl Kolchak.

Tribes was a huge rating success when it aired, leading to it getting a limited theatrical release.  In Europe, it was retitled The Soldier Who Declared Peace. 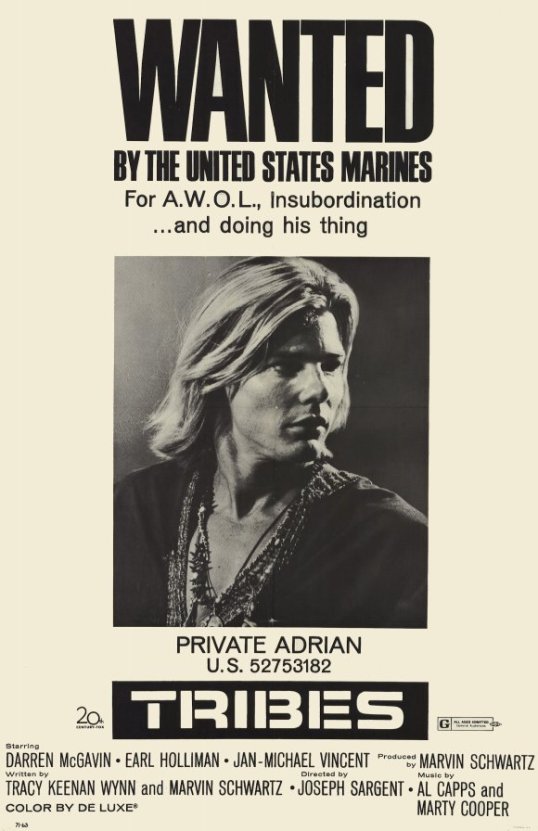 Wanted! For doing his thing!


I was sick most of yesterday. I needed a video at the last minute. Nothing fails to cheer me up like The Darkness. This one picks up after the video for I Believe In A Thing Called Love when their ZZ Top spaceship crash lands on every island of woman from every exploitation movie ever made–complete with a giant skull to reference Iron Maiden. I also wouldn’t be surprised if the shark is a reference to the one that stranded Huey Lewis on an island in the video for Stuck With You.