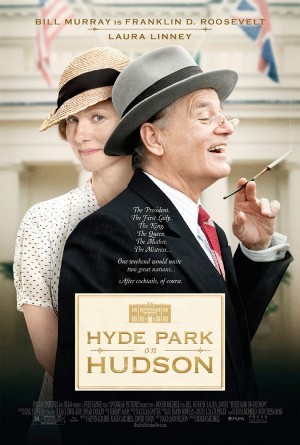 Is there anything more frustrating than a film that should have been good but yet somehow turned out to be … well, to be rather awful?

Case in point: 2012’s Hyde Park On Hudson.  In this slow-moving and almost painfully old-fashioned film, Bill Murray plays President Franklin D. Roosevelt.  When the film opens in 1939, Roosevelt is being visited by his sixth cousin, Margaret (Laura Linney).  It’s been several years since Roosevelt and Margaret last saw each other.  Franklin’s mother (Elizabeth Wilson) thinks that Margaret’s company could cheer up her melancholy son.  So, FDR and Margaret go out for a drive and, sitting atop a nice green hill, Margaret gives him a hand job.

And it is the most stately and respectable hand job to ever be quaintly portrayed in an American film.

Anyway, the rest of the film deals with FDR’s affair with Margaret.  Eventually, Margaret discovers that FDR has many mistresses but, before she does that, she helps FDR to charm England’s King George VI (Samuel West).  In the days leading up to World War II, George and his wife (Olivia Colman) visit Roosevelt out at his Hyde Park estate.  As we all know from watching The King’s Speech, George is insecure about his stutter.  But, fortunately, FDR points out that, despite the fact that he’s in a wheelchair, people still view him as being a strong leader and therefore, people will view George in the same way, regardless of his stutter.

And, speaking as a former stutterer, I have to say that it’s amazing to witness how poorly Hyde Park On Hudson deals with subject matter that was so brilliantly handled in The King’s Speech.

When I first heard about Hyde Park On Hudson, I had high hopes for it.  After all, I love history.  I love royalty.  I love gossip and I love scandal.  And, really. FDR was one of our more gossip-worthy Presidents, a spoiled rich kid who could not reach his full potential until after he was struck down by polio and who regularly cheated on his wife while battling both the Great Depression and the Nazis.  FDR was a dynamic and controversial figure and none of that comes through in Hyde Park on Hudson.

(Seriously, Bill Murray is totally wasted in this film.  If you’re going to cast an iconic actor in an iconic role, at least give him some good dialogue.)

In the end, Hyde Park on Hudson fails because it’s just too respectful.  It’s a slow, visually unimaginative film that manages to make an exciting time feel dull.  FDR deserves better and so does Bill Murray.

One response to “Shattered Politics #89: Hyde Park on Hudson (dir by Roger Michell)”