Okay, I know.  It’s not Valentine’s Day yet.  But it will be soon.  50 Shades of Grey is opening tomorrow and I have a feeling that, come November, there will be hundreds of newborn babies being named Christian and Anastasia.  (And, in a few years, they’ll all have teenage babysitters named Bella…)

However, in case you can’t get into 50 Shades of Grey, here’s two other films that you could possibly watch on Valentine’s Day.  Much like 50 Shades, they both involve a woman having sex with a manipulative sociopath.  The Boy Next Door is still in theaters while Bound has just been released on video.

And they’re both reviewed below!

The Boy Next Door, which was released towards the end of January, was the first film of 2015 that I was really excited about seeing.  That’s not because I thought that the film was going to be any good.  Instead, it was because I literally couldn’t watch any movie on Lifetime without seeing about a dozen commercials for The Boy Next Door.  The commercials promised a lot of cheap thrills and sordid melodrama.

Anyway, my BFF Evelyn and I saw The Boy Next Door on the weekend that it was first released and we had a great time watching it.  Though the film may start slow, it eventually becomes a minor triumph of so-bad-its-good filmmaking.  This is the type of film that you would normally expect to see going straight to cable but, somehow, it managed to get a theatrical release.  Making it all the more fun is the fact that it stars Jennifer Lopez, playing the type of role that you would normally expect to see Jennifer Love Hewitt or Elizabeth Berkley playing in a Lifetime movie.

Jennifer Lopez plays an AP English teacher who has recently separated from her adulterous husband (John Corbett).  When a teenage boy (Ryan Guzman) moves in next door and starts standing naked in front of his bedroom window, can you really be surprised that he and Lopez end up spending one night making torrid love?  Well, unfortunately, Guzman turns out to be a bit obsessive and, when the new school year begins, he suddenly shows up as one of Lopez’s students.  And you can probably guess what happens from there…

As directed by Rob Cohen, there’s really nothing surprising or interesting to be found in The Boy Next Door but we still had a lot of fun watching it, if just because it gave us an excuse to be snarky.  Ryan Guzman was undeniably hot and, wisely, Jennifer Lopez didn’t seem to be taking the film that seriously.  The great Kristin Chenoweth showed up as Lopez’s best friend and the film’s climax was appropriately over the top.

And, three weeks after seeing the film, Evelyn and I are still laughing about the scene where Guzman gives Lopez a gift, a copy of The Illiad.   Looking down at the book, J. Lo says, “Oh!  A first edition!”  Evelyn and I were just like, “Really?  So, that book’s from 760 B.C!?”  Seriously, did the character have a time machine?

Now, that would have made for an interesting movie! 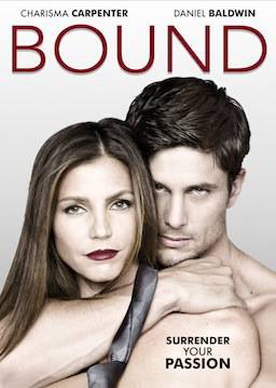 If, for some reason, you can’t find a theater showing 50 Shades of Grey this weekend, I would suggest instead watching the Asylum’s mockbuster version, Bound.

(Personally, I would have titled the film 50 Shades of Charisma but anyway…)

In Bound, Charisma Carpenter plays Michelle, a real estate broker who has an unsatisfying sex life and who finds herself regularly being bullied by her boss (Daniel Baldwin).  However, Michelle then meets Ryan (Bryce Draper), who is young, handsome, rich, and very much into domination  He even has a red room in his mansion where…

Oh wait, does this sound familiar?

Okay, so Bound pretty much tells the same story as 50 Shades of Grey but there are a few significant differences.  A big one is that, as played by Carpenter, Michelle is a much stronger character than Anastasia Steele.  For one thing, she’s not an innocent and naive girl being introduced to sex for the first time by a charming sociopath.  Instead, she’s significantly older than Ryan, which also brings an interesting dynamic to the film.  Michelle’s not a virgin, she doesn’t say things like “jeez” or “oh my,” and she’s capable of getting aroused without obsessing about what her inner goddess is doing as a result.  And, while her relationship with Ryan does head in a similar direction as Anastasia’s relationship with Christian Grey, Michelle never seems weak as a result.  Instead, she’s experimenting and there’s no way you can’t root for her as you watch the movie.

(Ryan, meanwhile, is ultimately portrayed as being the type of manipulative sociopath that Christian Grey would be in real life.)

Perhaps my favorite part of the film was Michelle’s relationship with her teenage daughter, Dara (Morgan Oberender).  The two actresses play off each other well and, from the minute they first interacted, I believed that they could be mother and daughter.  They’re relationship felt real and, as a result, you cared about both of them and found yourself hoping that things would work out for the best.  And, as a result, it made one of the film’s final plot twists feel very immediate and real.

Bound is the type of film that will be (and has been) dismissed by a lot of mainstream critics but it deserves more consideration than it’s been given.