Basically, it tells the story of Christie Ryder (Lucinda Dickey), who appears to have everything that someone could want out of life.  Not only does she have a really nice place to live but she also repairs phone lines for a living!  (That might not sound glamorous but she lives in California, which means that there’s always a nice view when she’s working.)  She also teaches an aerobics class because this film is from 1984 and, in 1984, everyone taught their own aerobics class.  At least, that’s the impression that I’ve gotten from watching movies of the era.

Christie only has one problem.  She’s been possessed.  She hasn’t been possessed by any ordinary old demon, either.  Instead, she’s been possessed by a dead ninja.  Hanjuro (David Chung) came to America because there were some people on a golf course who needed to be killed.  Unfortunately, no sooner had he killed everyone on the back 9 then he found himself surrounded by cops.  It took a lot of bullets to take down Hanjuro but down he went.  However, his spirit went up and entered Christie’s body.

Now, Christie spends her time teaching aerobics, working on phone lines, and murdering everyone who Hanjuro feels has wrong him.  Hanjuro wants to kill all of the cops who shot him.  Unfortunately, one of those cops, Billy Secord (Jordan Bennett), is now dating Christie.  Once Billy finally figures out why Christie is acting so strangely, he takes her to an exorcist (James Hong) who explains that it’s going to take more than just an ordinary exorcism to defeat the ninja lurking within Christie.  It’s going to require the help of another ninja, the noble Goro Yamada (Sho Kosugi).  It’s time to go to Japan!

I may not be a huge ninja movie fan (unless, of course, they feature Franco Nero) but I have to say that I absolutely loved Ninja III.  That really shouldn’t come as a surprise.  This film is such an utterly weird mishmash of tones and genres that there’s no way that I couldn’t love it.  It starts out as a typical kung fu film, just to suddenly turn into The Exorcist before then becoming Flashdance before returning to being The Exorcist.  Finally, for the last few minutes of the film, it transforms back into a kung fu film.  As I watched the film, I found myself thinking about all of the other films throughout history that could have been livened up by a demonic or spiritual possession subplot.  For that matter, think about how much more crazy The Exorcist would have been if Father Karras and Father Merrin had been Ninja Karras and NInja Merrin.

Anyway, in all seriousness, Ninja III is exactly what an exploitation film should be.  It’s unapologetically strange and over-the-top and it makes absolutely no apologies for being what it is.  It’s a film that says, “I’m here to tell a story about a woman possessed by a dead ninja and if that’s not good enough for you, you need to figure out what’s wrong with your heart.”  Ninja III is brilliant, wonderful, and definitely a film that you must watch this October.  It’s on Prime so go watch it.  Do it now. 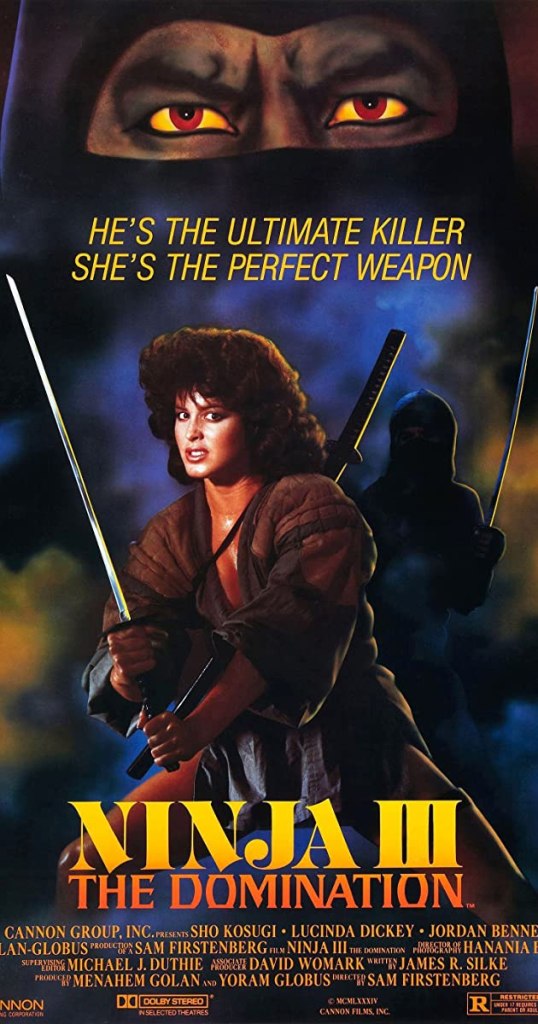 What’s an Insomnia File? You know how some times you just can’t get any sleep and, at about three in the morning, you’ll find yourself watching whatever you can find on cable or Netflix? This feature is all about those insomnia-inspired discoveries!

It’s been nearly a year since I did my last Insomnia File.  To be honest, as much as I enjoy writing these posts, I feel like the idea behind the Insomnia File format has become obsolete.  The days of people dealing with insomnia by randomly flipping through movies and infomercials have pretty much come to an end.  Now, if someone has insomnia, they’re more likely to binge an old show on Netflix.

That said, if you had insomnia at one in the morning last night and you didn’t feel like binging The Office for the hundredth time, you could have turned over to TCM and watched the 1981 film, Enter the Ninja.

What would you have gotten out of Enter the Ninja?  Five words: France Nero as a ninja.  Seriously, what more do you need?  Nero plays Cole, a former mercenary who goes off to Japan, trains to become a ninja, and then heads off for the Philippines, where his old mercenary friend, Frank (Alex Courtney), owns a farm.  Frank and his wife, Mary-Ann (Susan George) are having problems because evil businessman Charles Venarius (Christopher George, chewing up the scenery as the bad guy) is determined to force them off of their land.  Add to that, Frank is a pathetic drunk.

Soon, Cole is putting on his white ninja suit and fighting to protect the farm and also dealing with Venarius’s ninja, who just happens to be an old rival of Cole’s.  Cole is also carrying on an affair with Mary-Ann but that’s not big deal because Frank isn’t much of a man.  One of the most interesting things about Enter the Ninja is that it may be a martial arts film but it’s also a modern western and a domestic drama.  Cole could just as easily be a gunslinger, protecting the homesteaders.  Frank and Mary-Ann could just as easily be a couple on a daytime drama.  Instead, they’re all in a ninja film.

The main appeal of Enter the Ninja is Franco Nero, an actor who — in his prime — was one of the sexiest men to ever appear in the movies.  He spends a good deal of the film with his face covered but the important thing is that you can still see those beautiful blue eyes.  As usual, Nero gives a good performance with so-so material.  Nero brings his trademark intensity to the role and he does actually seem to care about whether or not his friends lose their farm.

Enter the Ninja was directed by the legendary Menahem Golan, a filmmaker who understood the importance of never letting the action slow down.  Enter the Ninja is dumb, over the top, and entertaining.  Plus, it’s got Franco Nero!  What else do you need at one in the morning? 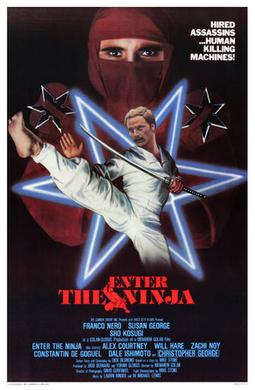 There comes around a few films every year which I end up enjoying despite how awful it is to most everyone. I’m a major fan and follower of all things grindhouse and for some grindhouse means it was made during the late 60’s and through most of thru the 70’s. I always thought of grindhouse as a state of mind. I mean I like to believe that’s why Robert Rodriguez and Quentin Tarantino make the films that they make (all of them grindhouse films at heart if not execution). So, it happens that in 2009 there was one film which was panned universally by critics and mainstream audiences everywhere. It was the second film by Wachowski Brothers protege James McTeigue. He was the same director who made the impressive V for Vendetta film adaptation (I still believe to this day that the Wachowski Brothers had a hand in directing that adaptation).

When word came down that he was going to do a modern ninja film which included Sho Kosugi (he practically was the star of most, if not all, of the best-known ninja grindhouse flicks of the 70’s and 80’s) there was no doubt that this film would rock. The heightened anticipation for this martial arts extravaganza would turn out to be more a whimper than a bang. James McTeigue’s Ninja Assassin became one of 2009’s worst films of the year and part of me don’t agree with how most people viewed it.

The story for this film was quite simple. Former ninja assassin tries hiding from his former ninja clan and it’s badass ninja leader (played by badass ninja-man himself, Sho Kosugi). The part of this former ninja was played by Korean singing pop sensation who went by the name Rain. He got the lead part for this film due to the Wachowski Brothers and uber-action producer Joel Silver having been impressed seeing his work on the Wachowski Brothers’ very-maligned and misunderstood live-action take on the classic Japanese anime series, Speed Racer. The brothers and Silver saw a start on the rise in their midst and decided to make a film around Rain. The fact that the film ended up being Ninja Assassin must’ve been one reason why we haven’t heard of him in the US since.

Still, Rain did a good enough job as the blank-faced, albeit master of the ninja arts, Raizo. He was chosen because he looked the part, moved like the part and probably powers that be thought him being shirtless half the time would bring in the huge J-pop and K-pop demographic. Again, the producers might have been reaching a bit much when they were developing Ninja Assassin.

The rest of the film is Raizo being chased by his former clan, having flashbacks of his time as a child being trained by the Ozuna ninja clan to become their top assassin, then back to the present trying to kill as many ninja as possible, while avoiding getting killed himself. Believe me when I say that the blood and body parts rain down like dismembered bodies were on sale at Wal-Mart and everything was tagged “Entire Stock Must Go!”.

Ninja Assassin will live and die through it’s action sequences and despite the heavy use of CGI-blood the action in this film were pretty good. There’s the usual slo-mo tricks the Wachowski Brothers have become well-known for and it seems like their protege have learned from them well. I actually thought that the ultra-violent and very gory action scenes is why this film reminded me of past martial arts grindhouse flicks. Those were also very bloody and violent. It was as if the filmmakers of those film were telling McTeigue that the more blood and violence the merrier.

I would mention that the film had some good performances from the non-ninja roles played by Naomie Harris and Ben Miles, but I’d be lying. Their work here was passable and just needed to fill the slow and dialogue-heavy gaps in-between ninja butchering. These non-ninja butchering scenes actually slowed the film down. I do believe that if they were replaced with more ninja butchering hapless Interpol security agents and vice versa then Ninja Assassin would’ve turned out a hundred times better. Sometimes mindless gory violence is better than wince-inducing dialogue and exposition.

From the sound of this review one would think that I didn’t like Ninja Assassin. Part of me doesn’t like this film, but the part of my brain which understands the nature of grindhouse flicks loved this film because of the very awful things people say about it. This is a film which was so bad that it passed the point of awfulness and became entertaining in its very own way. I mean this film definitely felt like a Sho Kosugi ninja flick but of the digital age. I always believed that no matter the era and no matter how advanced film techniques get there will always be filmmakers out there who go about in a serious manner to create a good film, but despite their best intentions and plans the overall execution and final product don’t live up to their expectations. In a way, that’s what most grindhouse films tend to be in the end. Films made with the best in mind but got lost in its very own grandiose plans to come out batshit nuts on the other side.

PS: Those wondering how ninja having no guns can take on militayr-trained agents in tactical armor wielding the latest in assault rifles. Well, who needs a Heckler&Koch G36 assault rifle when one can throw shuriken as fast as an assault rifle. In the end, Ninja vs. SWAT makes for a badass, mindless climactic battle scene.