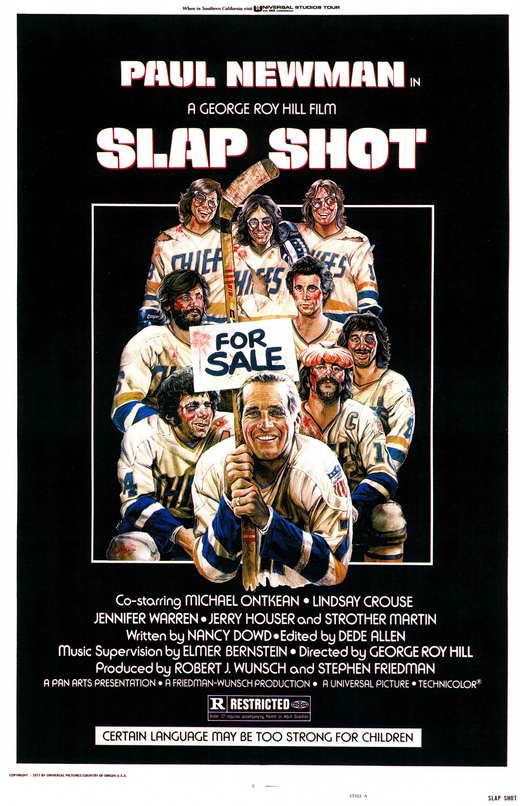 Hockey fans are excited about this year’s Stanley Cup Finals between the Boston Bruins and the St. Louis Blues, so I figured now’s the time to take a look at the quintessential hockey movie, George Roy Hill’s SLAP SHOT. Hill and star Paul Newman, who’d previously collaborated on BUTCH CASSIDY & THE SUNDANCE KID and THE STING, reunited for this raucous, raunchy sports comedy about a failing minor league hockey team who reinvent themselves as a hard-hitting goon squad. 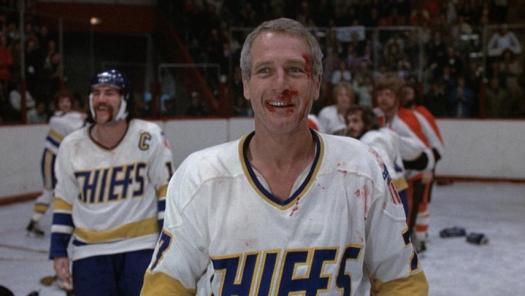 Newman plays Reg Dunlap, an aging rink rat now the player-coach for the Chiefs, a dying franchise in a dying mill town. The team is on a massive losing streak, and attendance is at an all-time low. Two-bit GM Joe McGrath (Newman’s COOL HAND LUKE antagonist Strother Martin) is trying to sell the Chiefs, and things look bleak until Dunlap begins taunting his opponents and the rink violence escalates. Enter a…


Earlier tonight, as a part of their 31 Days of Oscar, TCM aired The Sting, the film that the Academy selected as being the best of 1973.  I just finished watching it and what can I say?  Based on what I’ve seen of the competition (and there were a lot of great films released in 1973), I would not necessarily have picked The Sting for best picture.  However, the movie is still fantastic fun.

The Sting reunited the director (George Roy Hill) and the stars (Robert Redford and Paul Newman) of Butch Cassidy and the Sundance Kid and told yet another story of likable criminals living in the past.  However, whereas Butch Cassidy largely satirized the conventions of the traditional Hollywood western, The Sting is feels like a loving homage to the films of 1930s, a combination of a gritty, low-budget gangster film and a big budget musical extravaganza.  The musical comparison may sound strange at first, especially considering that nobody in The Sting randomly breaks out into song.  However, the musical score (which is famously dominated by Scott Joplin’s The Entertainer) is ultimately as much of a character as the roles played by Redford, Newman, and Robert Shaw.  And, for that matter, the film’s “let-pull-off-a-con” plot feels like an illegal version of “let’s-put-on-a-show.”

The film takes place in the 1936 of the cultural imagination, a world dominated by flashy criminals and snappy dialogue.  When con artists Johnny Hooker (Robert Redford) and Luther Coleman (Robert Earl Jones) inadvertently steal money from a gangster named Lonnegan (Robert Shaw), Lonnegan has Luther murdered.  Fleeing for his life, Hooker goes to Chicago where he teams up with Luther’s former partner, veteran con man Henry Gondorff (Paul Newman).  Gondorff used to be one of the great con artists but he is now living in self-imposed obscurity, spending most of his time drinking and trying to avoid the FBI.  Hooker wants to get revenge on Lonnegan by pulling an elaborate con on him.  When Gondorff asks Hooker why, Hooker explains that he can either con Lonnegan or he can kill him and he doesn’t know enough about killing.

The rest of the film deals with Hooker and Gondorff’s plan to con Lonnegan out of a half million dollars.  It’s all very elaborate and complicated and a bit confusing if you don’t pay close enough attention and if you’re ADHD like me.  But it’s also a lot of fun and terrifically entertaining and that’s the important thing.  The Sting is one of those films that shows just how much you can accomplish through the smart use of movie star charisma.  Redford and Newman have such great chemistry and are so much fun to watch that it really doesn’t matter whether or not you always understand what they’re actually doing.

It also helps that, in the great 70s tradition, they’re taking down stuffy establishment types.  Lonnegan may be a gangster but he’s also a highly respected and very wealthy gangster.  When Newman interrupts a poker game, Lonnegan glares at him and tells him that he’ll have to put on a tie before he’s allowed to play.  Lonnegan may operate outside the law but, in many ways, he is the establishment and who doesn’t enjoy seeing the establishment taken down a notch?

As entertaining as The Sting may be and as influential as it undoubtedly is (Steven Soderbergh’s Ocean films may be a lot more pretentious — which makes sense considering that Soderbergh is one of the most pretentious directors in film history — but they all owe a clear debt to The Sting), it still feels like an unlikely best picture winner.  Consider, for instance, that The Sting not only defeated American Graffiti and The Exorcist but Ingmar Bergman’s Cries and Whispers as well.  On top of that, when you consider some of the films that were released in 1973 and not nominated — Mean Streets, Badlands, The Candy Snatchers, Day of the Jackal, Don’t Look Now, Jesus Christ Superstar, and The Long Goodbye — it’s debatable whether The Sting should have been nominated at all.  That’s not a criticism of The Sting as much as it’s an acknowledgement that 1973 was a very good year in film.

So, maybe The Sting didn’t deserve its Oscar.  But it’s still a wonderfully entertaining film.  And just try to get that music out of your head!

Should I start this post by ticking everyone off or should I start out by reviewing the 1969 best picture nominee Butch Cassidy and The Sundance Kid?

Let’s do the review first.  I recently watched Butch Cassidy and the Sundance Kid when it aired as a part of TCM’s 31 Days of Oscar.  This was actually my third time to see the film on TCM.  And, as I watched Butch Cassidy and the Sundance Kid for the third time, I was shocked to discover how much I had forgotten about the film.

And I know what you’re saying.  You’re saying, “It sounds like you remembered the whole movie, Lisa!”

No, actually I did not.  The thing with Butch Cassidy and the Sundance Kid is that the scenes that work are so memorable that it’s easy to forget that there’s also a lot of scenes that aren’t as memorable.  These are the scenes where the film drags and you’re thankful that Paul Newman and Robert Redford were cast as Butch and Sundance, because their charisma helps you overlook a lot of scenes that are either too heavy-handed or which drag on for too long.  You’re especially thankful for Newman, who plays every scene with a twinkle in his wonderful blue eyes and who is such a lively presence that it makes up for the fact that Redford’s performance occasionally crosses over from being stoic to wooden.  It can be argued that there’s no logical reason for a western to feature an outlaw riding around on a bicycle while Raindrops Keep Fallin’ On My Head plays on the soundtrack but Paul Newman’s so much fun to watch that you can forgive the film.

Newman and Redford both have so much chemistry that they’re always a joy to watch.  And really, that’s the whole appeal of Butch Cassidy and the Sundance Kid, the chance to watch two iconic actors have fun playing opposite each other.  Even though Katharine Ross appears as their shared romantic interest, the film’s love story is ultimately between Butch and Sundance (and, by extension, Newman and Redford).  You can find countless reviews that will give all the credit for the film’s appeal to William Goldman’s screenplay.  (You can also find countless self-satisfied essays by William Goldman where he does the exact same thing.)  But, honestly, the film’s screenplay is nothing special.  This film works because of good, old-fashioned star power.

Now, for the part that’ll probably tick everyone off (heh heh), I think that Butch Cassidy and the Sundance Kid is actually a pretty good pick for a future remake.  All you have to do is pick the right actors for Butch and Sundance.  I’m thinking Chris Pratt as Butch and Chris Evans as Sundance…