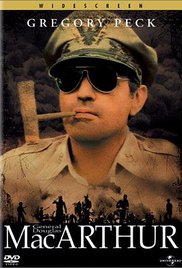 The year is 1962 and Douglas MacArthur (Gregory Peck), the legendary general, visits West Point for one last time.  While he meets the graduates and gives his final speech, flashbacks show highlights from MacArthur’s long military career.  He leaves and then returns to Philippines.  He accepts the Japanese surrender and then helps Japan rebuild and recover from the devastation of the war.  He half-heartedly pursues the Presidency and, during the Korean War, gets fired by Harry Truman (Ed Flanders).

MacArthur is a stolid biopic about one America’s most famous and controversial generals.  It was produced by Frank McCarthy, a former general who knew MacArthur and who previously won an Oscar for producing Patton.  McCarthy was obviously hoping that MacArthur was do its subject what Patton did for George Patton and both films follow the same basic pattern. a warts-and-all portrait of a World War II general with all of the action centered around the performance of a bigger-than-life actor in the title role.  Though obviously made for a low budget, MacArthur is a well-made and well-acted movie but it suffers because Douglas MacArthur was just not as interesting a figure as George Patton.  Gregory Peck does a good job subtly suggesting MacArthur’s vanity along with capturing his commitment to his duty but he never gets a scene that’s comparable to George C. Scott’s opening speech in Patton.  The main problem with MacArthur, especially when compared to Patton, is that George Patton was a born warrior while Douglas MacArthur was a born administrator and it is always going to be more exciting to watch a general lead his men into battle then to watch him sign executive orders.