(Check out last week’s in review by clicking here!)

So, the football’s over now, right?

So, I’m sitting here like I do every year and I’m trying to pick my favorite Super Bowl ads.  (After all, the commercials are the only reason that I ever watch the Super Bowl.)  And I have to say that I’m having some difficulty doing it this year because, for the most part, all of the commercials were hella forgettable.  There were a few good ones and a few bad ones but the majority of them were just kind of there.

The bad ones, of course, were easy to spot.  There was that creepy Robochild who I guess is supposed to convince you to get your taxes done or something.  The first Google ad — the one about people using Google translate to discover how to say “I love you” — was a bit too desperate to convince us that Google is a force of good as opposed to evil.  (As long as I can always use it to check the weather, I really don’t care what Google does in its spare time.)  I might have liked the Steve Carell Pepsi ads if they had been for Coke instead.  You have to understand that, down south where I live, we kind of find Pepsi to be offensive.

To be honest, the best ads were the movie trailers but I just spent about 5 hours posting all 16 of those to the site.  Here are 6 other commercials that, regardless of whether I liked them or even found them to be effective, I won’t forget.

1.  Every Super Bowl, I look forward to the new M&M’s commercial.  This year’s was as cute as always and Christina Applegate did a good job selling the frustration.

2. I didn’t necessarily like this Audi commercial but it did spark an interesting theological debate between me and my sister about whether or not anyone would really need a car in Heaven.  Eventually, we concluded that the guy was actually in Purgatory, or at least he was until his life was saved.  It bothers me that, at the end of the commercial, that guy has a half-digested cashew somewhere on his desk.

3. I preferred the robots from this Michelob commercials to the Robo Child.

4. I’m not really sure what’s supposed to be going on in these commercials for Turkish Airlines.  I’m assuming that this is meant to be appeal to international assassins.

5. I did like this Olay commercial, mostly because of the horror angle.

6. And finally, there’s this commercial, which starts out as a Bud Light commercial but then quickly becomes something else.  I know I already shared this earlier tonight but seriously, this was so obviously the winner of the Super Bowl commercial sweepstakes that I simply have to show it again!

It wasn’t pretty. Defense dominated the game, but a late scoring drive by Tom Brady led to a Sony Michel touchdown, and the New England Patriots beat the Los Angeles Rams 13-3. It was the Pats’ sixth Super Bowl victory, tying them with the Pittsburgh Steelers for most championships in the Super Bowl era. Say what you want about it, but this native New Englander remembers when they flat-out sucked, making all this winning soooo much sweeter! 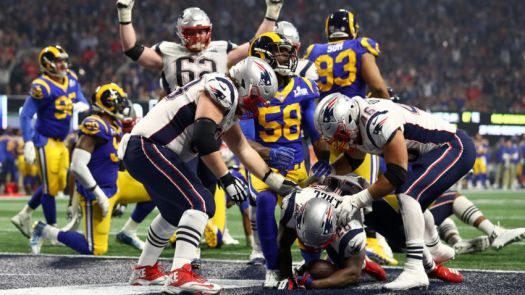 ATLANTA, GEORGIA – FEBRUARY 03: Sony Michel #26 of the New England Patriots scores a touchdown against the Los Angeles Rams in the fourth quarter during Super Bowl LIII at Mercedes-Benz Stadium on February 03, 2019 in Atlanta, Georgia. (Photo by Maddie Meyer/Getty Images)

Neither team could get anything going on offense, as the Rams’ #2 ranked defense and the Pats’ #4 ranked defense hit hard. Stephen Gostkowski nailed a 42 yard field…

Right after the game ended, PIXAR snuck in this little teaser for Toy Story 4.  I have to admit that I nearly changed the channel and missed it.  I’m glad I didn’t!

Anyway, it looks like Buzz is still getting into trouble and Woody is still trying to hold it all together.  To be honest, I thought Toy Story 3 ended the series on a perfect note so I’ll be curious to see what they do with Toy Story 4.  But you know what?  It’s PIXAR and it’s Toy Story so I have faith!

This Super Bowl spot from Alita: Battle Angel aired earlier in the game and I somehow missed it.  (I was probably talking about that Game Of Thrones/Bud Light ad.)  So, here it is now!

This film was produced and written by James Cameron and directed by Robert Rodriguez.  According to this spot, if you don’t see this film in a theater, the world will end and it’ll be all your fault.  So, I guess you better make the time.

That commercial with the exploding zit wasn’t the only Super Bowl teaser for Guillermo Del Toros’ Scary Stories To Tell In The Dark.  There was also this:

And, of course, this:

This film, from Guillermo Del Toro, will be coming out this summer and I can’t wait!  There’s nothing like terrifying, mind-bending horror to liven up the summer months.

Seriously, I totally screamed when I saw this.

Hanna was my favorite film of 2011 so I’m really hoping that the Amazon Prime adaptation does it justice.  Here’s the Super Bowl spot which, if nothing else, is far more exciting than the game that is currently being played in Atlanta.

Hanna will be available to Amazon Prime subscribers, right after the game ends.

Our Planet is a new Netflix series where Sir David Attenbourgh explores never-before-seen habitats.  I always get a little bit worried about nature documentaries because they always seem to lead up to a bunch of tigers eating a gazelle but, judging from this Super Bowl spot, it looks like the show features some really impressive footage.

Plus, I can’t resist anything that feature animals looking quizzically at a camera.

Here’s the Super Bowl spot for Our Planet!

Did you know there’s a new Twilight Zone coming out?

There’s actually been quite a few Twilight Zone revivals but this latest one involves Jordan Peele, who is a certified superfan of the show.  I mean, Get Out basically was a feature length Twilight Zone episode and Us was apparently inspired by the show.

Plus, the new Twilight Zone is going to be online which, in theory, means a bit less censorship.  That’s always a good thing.