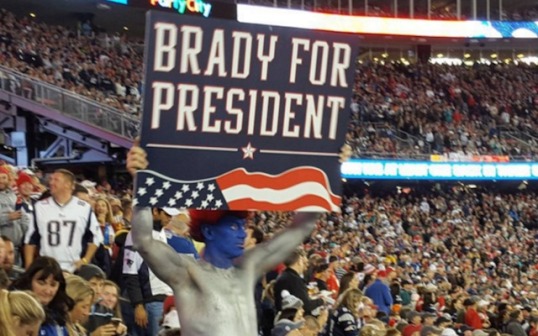 God may hate football but he loves Tom Brady.

Over the past 20 years, while football has struggled, Tom Brady has thrived.  While other quarterbacks have come and gone, Tom Brady probably has the most secure job in the league.  Brady is currently the winningest quarterback in NFL history and he doesn’t appear to be anywhere close to retiring.  If you’re playing against Tom Brady, you better not let the game get into overtime because Brady will come at you like a machine.

It’s interesting to take a look back at the 2000 NFL Draft and see the quarterbacks who were selected before the Patriots finally picked Tom Brady in the 6th round.  Chad Pennington, Giovanni Carmazzi, Chris Redman, Marc Bulger, and Spergon Wynn were all selected before Brady.  Pennington went on to have a successful career but otherwise, they’re a forgettable group of players.  Of the group, only Tom Brady would eventually lead his team to multiple Super Bowl appearances and only Brady is still playing in the NFL.

Tom Brady played in his first Super Bowl on February 3rd, 2002, leading the New England Patriots to a 20-17 victory over the favored St. Louis Rams.  Later today, Brady will again be facing the Rams.  Things are a little different now.  For one thing, the St. Louis Rams are now the Los Angeles Rams.  For another thing, the Patriots are favored to win this time.

But let’s get real.  The Rams aren’t going to beat the Patriots.  The Rams wouldn’t even be in the Super Bowl if not for a blown pass interference call.  Maybe the Saints could have beaten the Patriots but the Rams?  I don’t think so.

After losing to the Eagles last year, the Patriots have got something to prove this year.  I think they’re going to do just that.

One response to “My Super Bowl Predictions”