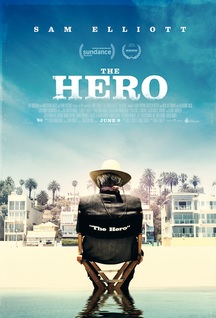 It’s too bad that The Hero didn’t get that much attention when it originally released because, towards the end of the film, Sam Elliott has a scene that features some of the best cinematic acting that I’ve ever seen.

I’m not going to spoil the scene, because I think you should experience it for yourself.  I’ll just say that it’s a scene that will take you totally by surprise and force you to reconsider everything that you had previously assumed about both the film and the lead character.  I’m not ashamed to say that the scene brought tears to my mismatched eyes.  When you hear Elliott say, “I’ve wasted your time,” it will bring tears to your eyes too.

And that’s all I’m going to say about that scene.

As for the rest of the film, it’s a character study of an actor.  Sam Elliott plays Lee Hayden, who we’re told was one of the top actors in the world in the 70s.  He specialized in westerns, films and TV shows in which he always played the hero.  Of course, that was a while ago.  Lee is 70 years old now and both westerns and heroes are out of date.  At this point, Lee’s only steady work comes from doing the voice over for a series of steak commercials.  He spends most of his time smoking weed with his best friend, Jeremy (Nick Offerman).

It’s not a bad life though Lee certainly has his regrets.  For instance, he hasn’t always been the best father.  His daughter (Krysten Ritter) doesn’t seem to want much to do with him.  He misses acting.  As is made clear in the film’s opening scene, doing 6 different takes for a commercial voice over isn’t exactly the most challenging or rewarding way for a former star to spend his semi-retirement.  But he has his one friend and he has marijuana and what else does he need?

But then one day, Lee is told that he might have cancer.  He might be dying.  Lee starts to think about his life and his legacy.  He tries to reconnect with his daughter.  He accepts a lifetime achievement award from the Western Hall of Fame and, just when you think both the film and Lee are about to get snarky, they surprise you by treating the award and Lee’s aging fans with a poignant respect.  Lee also pursues a relationship with a much younger stand-up comedienne (Laura Prepon) and while I did arch an eyebrow at the huge age difference between them, the film itself actually addresses the issue in an unexpected way.

It’s not the most tightly constructed film.  Darren Aronofsky’s The Wrestler was an obvious influence but The Hero never quite matches that film’s fatalistic glory.  But no matter!  The Hero is mostly about celebrating Sam Elliott, an underrated actor who shows that, much like Lee, he’s capable of much more than most viewers assume.  Elliott gives a poignant, wonderfully human performance as a flawed man who still deserves to be known as The Hero.

6 responses to “Playing Catch-Up With The Films of 2017: The Hero (dir by Brett Haley)”