The Snowman was the handle of Cledus Snow, the independent trucker who, along with his basset hound Flash, helped the Bandit escape Smokey in three different movies.  Cledus was played by the country western singer, Jerry Reed.  Interestingly, when Smokey and the Bandit was still in preproduction, the film’s producers envisioned a low-budget drive-in movie with Reed in the role of the Bandit.  When Burt Reynolds signaled that he would be interested in playing the man in the black Trans Am, Reed was instead cast as Cledus.

The box office success of Smokey and the Bandit led to several road films being rushed into production and more than a few of them starred Jerry Reed.  Several other of them starred Peter Fonda, who had already proven himself to be the king of the road with Easy Rider.  However, High-Ballin’ is the only trucker film that can claim to have starred both Jerry Reed and Peter Fonda.

In High-Ballin’, Jerry Reed may be playing “Iron Duke” Boykin but he might as well just be Cledus Snow again.  Once again, Reed is an independent trucker with a family at home and a love for the road.  (Just as he did with Smokey and the Bandit, Reed even performed High-Ballin‘s theme song.)  The local trucker’s union is putting pressure on the independent truckers and trying to intimidate them into joining.  Iron Duke has no intention of doing that.  Iron Duke has been hired to haul a load of liquor to an isolated lumber camp and he is not going to let the union or its thugs stop him.  Helping him along the way is his friend Rane (Peter Fonda) and another independent, Pickup (Helen Shaver).

High-Ballin‘ was not as bad as I was expecting it to be.  Reed, Fonda, and Shaver are likable in the lead roles and the action scenes are exciting.  Fonda may have been a notoriously inexpressive actor but he was always believable whenever he was cast as a rebel or an outsider and the friendship between him and the more expressive Reed is as believable as the friendship between Cledus and the Bandit in Reed’s previous trucking film.  Of course, the main reason you are going to watch a movie like High-Ballin’ is to see how many different ways that a car or a truck can be destroyed and this movie does not skimp on the vehicular destruction.  It’s nothing great but, as far as 70s trucking films are concerned, High-Ballin’ is better than average.

One final note: keep an eye out for Michael Ironside in an early role.

(Hi there!  So, as you may know because I’ve been talking about it on this site all year, I have got way too much stuff on my DVR.  Seriously, I currently have 193 things recorded!  I’ve decided that, on January 15th, I am going to erase everything on the DVR, regardless of whether I’ve watched it or not.  So, that means that I’ve now have only have a month to clean out the DVR!  Will I make it?  Keep checking this site to find out!  I recorded My Christmas Prince off of Lifetime on December 9th!)

When I saw the title of this one, I immediately started thinking about William Faulkner.  I thought about the tragic Compson family and the scandalous Snopes family and the complicated legacy of Colonel John Sartoris.  I found myself wondering what Yoknapatawpha County looks like today and whether the town of Jefferson had changed much since Faulkner’s day.

Of course, Christmas In Mississippi is not based on a Faulkner short story, nor does it claim to be.  Instead, it’s a thoroughly pleasant Lifetime holiday movie, a good-natured celebration of Christmas tradition and romance.  Still, it’s rare that you ever seen any movie set in Mississippi, outside of the occasional Faulkner adaptation or stories that focus on Mississippi’s past.  Much as with New Jersey, it sometimes seems like the only time you see or hear about Mississippi on television or in a movie is when it’s being set up as the punch line to a joke so I guess my point  is that it’s nice to see a positive movie about Mississippi.  Not only is this film set in Mississippi but it was actually filmed there, in the lovely city of Gulfport.

As for the movie itself, it deals with Holly Logan (Jana Kramer), a photographer who returns to her hometown of Gulfport for the holidays.  Not only is she visiting her mother, Caroline (Faith Ford) but she’s also helping to set up the holiday light show, the first one to be held since Gulfport was hit by a destructive hurricane five years ago.  (In real life, Gulfport was hit and seriously damaged by Hurricane Katrina.)  The only real complication for Holly is that the festival is being supervised by Mike (Wes Brown), who broke her heart in high school.  Even though Caroline insists that Mike has changed and matured since high school, Holly doesn’t want to risk getting hurt again.  Fortunately, Mr. Kriss (Barry Bostwick) is working at the festival and he’s good at bringing people together.  And yes, Mr. Kriss is playing Santa Claus.  If you’re surprised by that, you’ve obviously never watched a holiday movie before.  (That’s not a complaint.  If you make a holiday movie where St. Nick isn’t the one bringing your couple together, you’re doing it wrong.)

Christmas In Mississippi is a nice little movie.  Though the plot may not take you by surprise, Jana Kramer and Wes Brown make for a likable couple and the entire cast has a charming chemistry.  You really do believe that they are all neighbors and they all did grow up next to each other.  It’s a sweet movie.  In the end, Holly does a good job with the light show and so does the movie.  For that matter, so does the city of Gulfport, which looks great in Christmas in Mississippi.

(Hi there!  So, as you may know because I’ve been talking about it on this site all year, I have got way too much stuff on my DVR.  Seriously, I currently have 193 things recorded!  I’ve decided that, on January 15th, I am going to erase everything on the DVR, regardless of whether I’ve watched it or not.  So, that means that I’ve now have only have a month to clean out the DVR!  Will I make it?  Keep checking this site to find out!  I recorded My Christmas Prince off of Lifetime on December 3rd!)

That’s an actual headline that is seen in My Christmas Prince.  The prince in question is Prince Alexander Theodore William Hendricks (Callum Alexander), who is the next in line to take the throne in some little European country that’s definitely not the UK despite the fact that everyone there speaks with a British accent.

Everyone knows that Alexander as a prince, everyone but his girlfriend, Samantha (Alexis Knapp).  She just thinks he’s a diplomat and technically, he is.  It’s not so much that he lied to her about being royalty.  It’s just that he didn’t tell her the whole truth.  He wants to be judged based on who he is and not his royal heritage.  Of course, by not telling Samantha that he’s a prince, he also hasn’t told her that he will eventually be expected to return home and rule his country.  Samantha has plans of her own, which don’t involve being the Queen of a small European country that is definitely not the UK.  She’s just been hired to design a summer school program for every school in the Bronx!  The children need her!

(Personally, if I had the chance to be the ruler of a small country that pretty much only exists to support its royal family, I would say screw the children and catch the next flight to Monaco.)

Anyway, when Samantha decides to spend her Christmas with her family in Wyoming, Alexander decides to follow.  And no sooner has Alexander stepped into the local diner then a waitress immediately recognizes him as the crown prince of whatever country it is that he is from.  It turns out that she saw pictures of him online, attending a cocktail party with the royal family of Sweden.

(Of course, it wouldn’t be a Lifetime movie if the Internet didn’t somehow threaten to destroy everyone’s happiness.)

Anyway, it takes Samantha a few minutes to get used to the idea that her boyfriend is a royal prince.  Of course, her parents are excited.  The entire state of Wyoming is excited.  But you know who isn’t excited?  Alexander’s mother!  Nope, she is scandalized at the thought of Alexander marrying a common American.  She’d rather Alexander marry a baroness.  Could this possibly lead to a bunch of misunderstandings and unlikely visitors coming to Wyoming?

What do you think?

Every Christmas, it seems like there’s at least a handful of Lifetime and/or Hallmark films that feature obscure European royalty falling in love in small town America.  Once you’ve seen one of these movies, you’ve seen them all.  There’s not a surprising moment to be found nor a disparaging word to be heard in My Christmas Prince, which is a mildly pleasant but eminently forgettable movie.  To be honest, I don’t really demand too much from these movies but My Christmas Prince just didn’t work for me.  For a predictable movie like this to work, there needs to be a real chemistry between the two leads but there really didn’t seem to be much of a spark between Knapp and Alexander.  Much like the movie, they just seemed to be going through the motions.

I’ve often been asked which member of the Royal Family I relate to.  Usually, I say Pippa Middleton but, to be honest, it’s the little girl in the picture below:

1964’s SANTA CLAUS CONQUERS THE MARTIANS ranks up there with the all-time greatest films, alongside giants like Ford, Welles, Kubrick, Hitchcock… okay, so that’s not entirely true. The low-budget kiddie movie consistently ranks among the worst films ever made, though I kinda like it myself! And I absolutely LOVE the title theme written by Milton DeLugg, “Hooray for Santa Claus”, though I still can’t figure out why the kid chorus sings it as ‘Santy’, not Santa. Oh well, enjoy this classic slice of Christmas cheese: 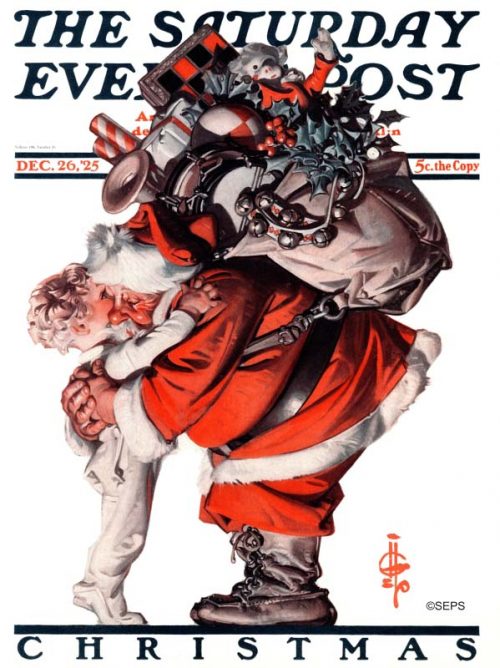 
Today’s music video of the day should not be confused with the Terry Zwigoff movie of the same name.  If anything this Santa seems pretty fun, even if he does charge for an autograph.

Anyway, I don’t have much to say about this video, other than it’s a fun little video and perfect for the holiday season.  It was directed by Jim Lang, who, according the imvdb, has been directing music videos since 2012.