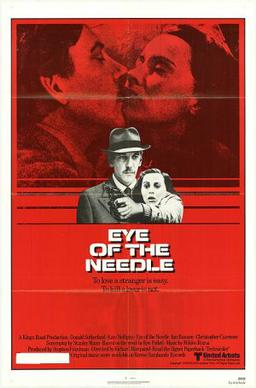 The time is World War II, shortly before D-Day.  Lucy Rose (Kate Nelligan) lives on an isolated island with her crippled husband, David (Christopher Cazenove), their young son, and a sheep herder named Tom (Alex McCrindle).  Embittered by the accident that left him in a wheelchair, David is abusively violent and emotionally shut off.  One night, during a sudden storm, a man who says his name is Henry Faber (Donald Sutherland) turns up on the island.  Henry claims that the storm caught him by surprise and left him stranded.  David doesn’t trust him and it turns out that, for once, David is right.  Faber is actually a semi-legendary German spy, code-named The Needle because his preferred instrument of murder is a stiletto.  Faber has discovered the plans for the Allied Invasion of Normandy.  He’s only on the island because he is waiting for a German u-boat to arrive and take him back to Berlin.  Complicating matters is that a romance has developed between Faber and Lucy.

Based on a novel by Ken Follett, Eye of the Needle is an old-fashioned spy thriller, distinguished by Kate Nelligan’s sensual turn as Lucy and Donald Sutherland giving what might be his career best performance in the role of Henry Faber.  Until he meets Lucy, Faber is a remorseless sociopath who is willing to kill anyone who discovers the truth about his identity.  For the majority of the film, it is left ambiguous whether Faber loves Lucy or if he’s just using her and Sutherland plays the role as if Faber himself is not really sure.  The final confrontation between Faber and Lucy is both suspenseful and exciting and will convince you to never stick your hand through a window unless you’re sure about what’s on the other side.  Eye of the Needle is a World War II thriller that deserves to be better known.

Following the success of this film, Richard Marquand was hired to direct Return of the Jedi., a film that is light years away from the gloomy world portrayed in Eye of the Needle.  He later directed another well-regarded thriller, Jagged Edge, before passing away from a stroke in 1987 at the age of 49.

(Hi there!  So, as you may know because I’ve been talking about it on this site all year, I have got way too much stuff on my DVR.  Seriously, I currently have 193 things recorded!  I’ve decided that, on January 15th, I am going to erase everything on the DVR, regardless of whether I’ve watched it or not.  So, that means that I’ve now have only have a month to clean out the DVR!  Will I make it?  Keep checking this site to find out!  I recorded the 1999 romantic comedy Just The Ticket off of Epix on October 13th!)

Gary lives in New York City.  He is a tough, streetwise character, loyal to his friends and quick to anger if he feels that anyone is trying to take advantage of him.  He has no time for pretentious posturing or snobbish social gatherings.  Gary’s a man of the people.  He works with and takes care of an aging former boxer named Benny (Richard Bradford).  He looks after a pregnant, former drug addict named Alice (Laura Harris).  When the slick and dangerous Casino (Andre B. Blake) starts to do business in Gary’s territory, Gary is the only person with the guts to stand up to him.  Having never had a family (he’s never even seen his birth certificate and has no idea who his parents were), Gary has adopted the street people as his surrogate family.

That’s not all.  Gary is also a lapsed Catholic who, when he goes to confession, opens by saying that it’s been 25 years since his last confession and that he’s taken the Lord’s name in vain 20 to 30 times that morning.  Gary needs some help because his girlfriend, an aspiring chef named Linda (Andie McDowell), has left him and Gary wants to win her back.  The priest asks Gary if he can get him tickets to see the Knicks…

Why does he ask that?

You see, Gary is a legendary ticket scalper and…

Okay, I probably just lost you when I used the terms “legendary” and “ticket scalper” in the same sentence.  And I’ll admit that, when I discovered this movie was about ticket scalpers, it nearly lost me as well.  Just The Ticket treats ticket scalping with a dignity and reverence that I’m not quite sure it deserves.  I wasn’t surprised to discover that director/writer Richard Wenk apparently based the character of Gary on an actual ticket scalper that he knew.  A lot of bad movies have been made as the result of a director, writer, or producer coming across some mundane activity and thinking, “Wow, this would make a great movie!”

(That’s one reason why, every few years, we suddenly get a dozen movies about race car drivers.)

However, I was pleasantly surprised to discover that Just The Ticket is not a terrible movie.  Admittedly, it’s totally predictable and there are a lot of scenes that don’t work.  For instance, there’s a lengthy scene where Gary and Linda destroy a snobbish food critic’s kitchen.  I could imagine Gary doing that because he has nothing to lose.  But Linda is actually hoping to become a chef in New York City.  Would she really run the risk of making a permanent enemy at the New York Times?  There’s nothing about Andie McDowell’s performance that suggests she would.  The scenes between Gary and his aging partner also tend to overplay their hand.  Richard Bradford gives a good performance as Benny but we all know what’s going to end up happening to him as soon as he starts crying after Gary insults him.

With all that in mind, Just The Ticket still has an undeniable charm.  Some of it is due to Andy Garcia’s dedicated performance.  He is frequently better than the material and he and Andie McDowell have enough chemistry that you do want to see Linda and Gary get back together.  Some of it is because Just The Ticket is not afraid to shy away from being sentimental.  It’s hard to think of any other romantic comedy in which the Pope plays such an important supporting role.  It’s a sweet movie.  It has a good heart.

There’s something to be said for that.

Dee Snider and his band released “A Twisted Christmas” in 2006, a heavy metal rendering of Christmas classics. The best of the bunch is “O Come All Ye Faithful”, using riffs from their hit “We’re Not Gonna Take It” to rock the traditional holiday hymn. There’s even an official video, and here it is! Enjoy “O Come All Ye Faithful”… and rock on, Dee!:


To be honest, the main reason that I picked this for today’s music video of the day is because it’s rare a day passes by that I don’t describe myself as being “a 90s bitch.”

Reportedly, this song was recorded at a time when both Aino Jawo and Caroline Hjelt were going through difficult break-ups.  From Songfacts.com:

The song doubles as a kiss-off to the Icona Pop duo’s then boyfriends. “We were going through similar stuff, with dating pigs, and things were not going our way. And when that song came along, we just felt it, and we wanted people to feel our anger,” Jawo explained to MTV News. “We felt the song was a strong song, and … we just wanted to get the song out and get the pigs to hear it. You know who you are.”

“Now, we meet them on the street when we’re back home, and you’re like ‘Hi!’ and they’re like ‘hi,'” Hjelt added. “And we’re like ‘Hahaha, thank you for the inspiration.'”