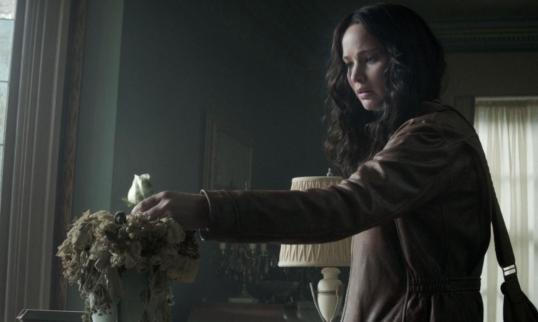 Of the three The Hunger Games films released so far, Mockingjay Part One is definitely the weakest.  That does not, however, mean that it’s a bad film.  It’s just that it doesn’t quite reach the grandeur of the first film, nor does it have the same political immediacy as the second one.  However, there’s a lot of good things to be said about Mockingjay.  Julianne Moore is perfectly cast as the charismatic but faintly sinister Alma Coin.  Philip Seymour Hoffman’s performance reminds us of what a towering talent we lost earlier this year.  Donald Sutherland continues to transform President Snow into a villain for the ages.  Even though he’s only in the film for a few minutes, Stanley Tucci is perfectly vapid as Caesar Flickerman.

In fact, the only real problem with Mockingjay is that it’s so obviously a prologue to something bigger.  Much as with The Maze Runner, we watch Mockingjay with the knowledge that it’s only part one and that the majority of the issues raised by the film will not be settled until next year.  The film itself knows this as well and, as such, it lacks the immediacy and much of the excitement of the first two Hunger Games films.

But yet, with all those flaws in mind, Mockingjay still works and it’s largely because of Jennifer Lawrence’s performance as Katniss Everdeen.  Whereas the first two Hunger Games films featured a Katniss who was always at the center of the action and always taking charge of any situation that she found herself in, Mockingjay features a Katniss who has far less control over her fate.  (One of the neater ironies of the series is that Katniss was actually more independent as a prisoner of President Snow than as a “guest” of Alma Coin.)  In Mockingjay, Katniss finds herself forced — with more than a little reluctance — to become the figurehead for the entire revolution and the film’s best moments are the ones in which others debate how to best “market” her.  These scenes are all about how Katniss — who is now not only a celebrity but a political icon as well — deals with losing control over her own public image.  Considering that Jennifer Lawrence’s rise to fame and acclaim occurred just as abruptly as Katniss’s, it’s probable that — even more so than in the previous films — the actress brought a lot of herself to the character.

So, yes, I would argue that Jennifer Lawrence does perhaps deserve some awards consideration for her performance in Mockingjay.  However, she truly deserves it for the consistent quality of her performance throughout the entire Hunger Games franchise.  From the very first film, Jennifer Lawrence’s performance has been iconic.  Fiercely independent without giving into the usual cinematic clichés that come with that, Katniss Everdeen has provided an alternative role model for a generation of girls who, otherwise, might have only had the likes of Bella Swan to look up to.

If that’s not worthy of being honored, then I don’t know what is.

6 responses to “For Your Consideration #6: Jennifer Lawrence in The Hunger Games: Mockingjay Part One”