Kickstarter, GoFundMe, Indiegogo are just a couple of ways the general public have been able to crowdfund things they really like. Crowdfunding has even entered film production with a film set for release being one of my more anticipated films of 2015.

Harbinger Down is the brainchild of Practical FX artists Alec Gillis and Tom Woodruff, Jr. As more and more studios begin to rely heavily on CGI-effects for their films the practical effects and make-up FX industry has taken a major hit. We’ve already seen practical effects master Rick Baker announce his retirement from the industry and many smaller effects studios either close shop or sold to larger studios.

From the look of the trailer it looks like Harbinger Down takes some inspiration from two classic scifi horror films of the past with Alien and John Carpenter’s The Thing. With legendary genre veteran Lance Henriksen headlining the ensemble cast, Harbinger Down is something genre fans deserve.

Last summer something caught my eye while scrolling up my Twitter feed. People I had been following were retweeting a Kickstarter campaign for an independent film. No, this wasn’t a Veronica Mars deal or Zach Braff begging the public for millions so he could make his own film. This was for a scifi-horror film that was going the whole practical effects route.

Harbinger Down is the brainchild of practical effects masters Alec Gillis and Tom Woodruff, Jr. whose own special effects studio Amalgamated Dynamics were instrumental in creating some of the practical effects for films such as the latest Godzilla and the underwhelming prequel for The Thing. It was their practical effects work for that prequel being replaced by CGI monsters at the very last second which convinced the two men to try and make a film using nothing but practical effects to show Hollywood bean counters and studio heads that there was still a place for the practical instead of going all-CG.

Their Kickstarter campaign to raise the funds to start Harbinger Down succeeded and in addition to the $387,000 or so raised and their own money and studio time the film began principal photography this past January. A rough trailer was shown around MArch, but now we have the first official trailer to Harbinger Down which looks like a love letter to Carpenter’s very own The Thing. 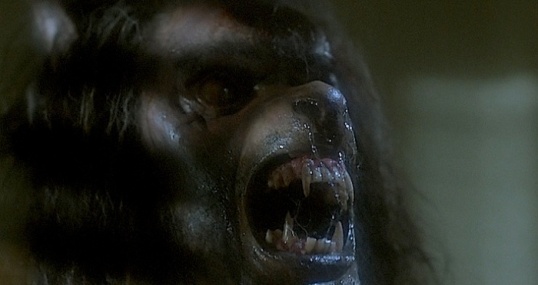 I always thought that Joe Dante’s 1981 horror film, The Howling, has been overlooked just a little bit due to it’s release being the same year as John Landis’ own horror film, An American Werewolf In London. Both were werewolf films and both were good in their own right.

Dante’s film has been called silly by some critics, but it was the more serious of the two with Landis’ own film mixing in more black humor in the narrative than Dante’s which took on a more traditional approach to the werewolf horror. Even the transformation scene from both films took on opposite sides in terms of mood and tone. Where Landis’ film treated the scene with both a mixture of horror and camp (due to the music playing in the background) in The Howling the scene went for full-on horror.

This has been one of my favorite horror scenes and it’s all due to the work of the very person who made John Carpenter’s The Thing such a memorable piece of horror filmmaking: Rob Bottin.

This man should be handed every award for every effects work he has ever done and will continue to do. It’s a shame that he hasn’t done anything of note since 2002’s Serving Sara, but until Hollywood decides that if they want great practical effects paired with advancing CG ones and hire Bottin once again we can always fall back on his past work such as the one’s he did for The Howling.