(Hi there!  So, as you may know because I’ve been talking about it on this site all year, I have got way too much stuff on my DVR.  Seriously, I currently have 186 things recorded!  I’ve decided that, on January 15th, I am going to erase everything on the DVR, regardless of whether I’ve watched it or not.  So, that means that I’ve now have only have a month to clean out the DVR!  Will I make it?  Keep checking this site to find out!  I recorded Psycho Brother-in-Law off of the Lifetime Movie Network on December 28th, 2017!) 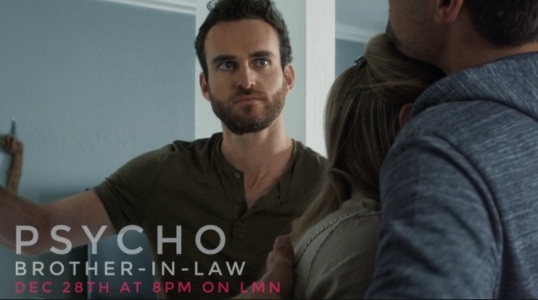 From our friends at the Asylum comes a film about love, marriage, family, and murder!

You may think that Eric (Mike Duff) has the perfect life.  He’s got a good job and a nice house.  He has a loving wife named Kay (Brittany Falardeau) and an intelligent teenage daughter named Laura (Megan Ashley Brown).  Good for Eric, right?

However, scratch the surface and you start to discover that things aren’t quite as perfect as they may appear.

Eric’s good job is keeping him away from his home and his family.  That nice house isn’t cheap and it’s big enough to store a lot of hurt feelings.

He sees his wife Kay (Brittany Falardeau) so sporadically that she has been reduced to scheduling sex with him.  “After date night?”

Laura, meanwhile, is dating Ron (Billy Meade) and we all know that Ron is bad news because he plays the guitar and he’s always hanging out in the high school’s hallway, instead of actually going to class.  Eric says that he thinks Ron is a punk.  Kay thinks Eric is overprotective.

And then, there’s David.

David (Zack Gold) is Eric’s brother.  One night, he mysteriously shows up at the front door, needing some place to stay.  At first, David seems like a good guy to have around the house.  He’s seems to be a nice guy.  He’s good at fixing stuff.  When Eric misses date night, David takes Kay to a movie.  When Laura rolls her eyes a little too much at her mom, David reminds Laura about how hard Kay has been working.

But there are little hints that David has some issues.  For one thing, he has trouble holding down a job and he’s remarkably tight-lipped about what he’s been doing for the past few years.  For another thing, Eric doesn’t seem to be too happy to see him, even though David is always willing to beat up anyone who gives his brother a hard time.  It seems that David is a bit overprotective himself.  He’s the type of guy who you never know whether he’s going to use a wrench to fix the sink or to bash your head in.

Of course, the main clue that we have that something is wrong with David is the title of the movie.  Since David and Eric are the only brothers in the film and Eric is the only one of them who is married, it doesn’t take much thought to figure out who is going to be the psycho…

BUT NO MATTER!  I love Asylum films like this.  The Asylum is so shameless and unapologetic about embracing the melodrama that you can’t help but love them.  I fell in love with this film as soon as David’s eyes bugged out when some fat slob accidentally bumped into Eric at the bar.  I was like, “Yes, this movie is totally going to live up to its title!”

And it did!  This was a fun movie, with Zack Gold totally turning it up to 11 in the role of the psycho brother-in-law.  According to the imdb, it only cost $200,000 to produce Psycho Brother-in-Law.  It was money well spent.