Another week comes to an end.

I’m a little bit sad because I learned that one of my favorite theaters — my beloved Look Cinema — has gone out of business as a result of the pandemic.  Look was my favorite theater to go to.  It was like the Alamo Drafthouse but not as expensive and usually with less hipsters in the audience.  The last film that I saw in a theater was at Look Cinema.  And now it’s gone.

Supposedly, the theaters down here will be reopening at the end of the upcoming week.  Personally, I’m not ready to go back yet.  If theater can remain open for a month without it resulting in another wave of infections, I’ll consider taking the risk.  If that means that I’m late seeing Tenet …. well, that sucks.  Because I really want to see Tenet.  But safety first.

Here’s what I watched and read and listened to this week:

Links From the Site:

Want to see what I did last week? Click here!


Yesterday, after I watched the 1984 film, Threads, I sat on my couch for about ten minutes trying to catch my breath and trying to vanquish a sudden wave of anxiety.  I then watched old episodes of The Office and King of the Hill because I desperately needed to laugh.  I needed to get my mind off what I had just seen.

Threads is one of the most depressing films that I’ve ever seen.  It’s also one of the most disturbing.  The film opens a few days before a nuclear attack on the UK and it ends thirteen years later.  We meet two families, the Kemps and the Becketts.  The two families live in Sheffield, the fourth largest city in England.  The Kemps are working class while the Becketts are middle class.  They both seems like nice enough families.  Due to an unplanned pregnant, Ruth Beckett (Karen Meagher) and Jimmy Kemp (Reece Dinsdale) are planning on getting married.

While the two families get to know each other, we hear news stories in the background.  Russia has invaded Iran.  America has said that this act of aggression will not stand.  The world is heading towards war but hardly anyone seems to notice.  People are used to bad news and besides, what can be done about it?  The best assurance that the British government can offer its citizens is a series of out-dated public service announcements.  The Kemps build a makeshift bomb shelter out of a door and a mattress.  The Becketts prepare to head into the basement.  Over the radios and the television, an official voice informs listeners that, in case of a bombing, the safest thing to do is to lie down and be perfectly still.  The Sheffield emergency management board sets up operations in an underground bomb shelter, located underneath the city hall.  The members of the board chain smoke and argue.  No one really seems to know who is in charge.

Though the war starts with America and Russia launching missiles at each other, it’s not long before the UK is hit.  Sheffield is bombed because of its steel and chemical factories and the fact that a nearby airfield would probably be used to house American forces.  When we last see Jimmy, he’s running down a road, trying to get to Ruth.  The city becomes an inferno.  Those who aren’t killed in the fires are left to try to survive the nuclear winter, the radioactive fallout, the looters, and the heavily armed policemen who attempt to maintain order through fear, intimidation, and executions.

Ruth is the first to explore the remains of the city and her exploration becomes a literal walk through Hell.  Charred corpses and dead animals litter the rubble.  A woman sits in a corner, holding a dead baby.  A trip to the infirmary reveals people screaming agony as limbs are amputated with anesthetic.  Angry survivors demands to be given food, just to have tear gas fired at them by scarred policemen.  Every minute of the film, society collapses just a little bit more until soon, Ruth has gone from being a hopeful soon-to-be bride to being just another person desperate for a piece of bread.  Indeed, for me, one of the most disturbing parts of the film was that, after the bomb dropped, Ruth largely stopped speaking.  It makes sense, though.  What’s the point of talking when there’s nothing left to say?

But it doesn’t just end with Sheffield.  We follow Ruth as she leaves the city and then we watch over the next 13 years as the UK is reduced back to medieval levels.  Ruth gives birth to a daughter named Jane (Victoria O’Keefe), who grows up in a world where there is no structure or education.  How bad do things get?  At one point, we see Ruth prostituting herself in exchange for three dead rats, just so she and her daughter can eat.  Jane, for her part, is so poorly educated that she can barely speak in coherent sentences.

And the thing is, it just keeps going.  Every moment when you think that things can’t possible get any worse, Threads keeps going and shows you that things can and do get worse.  It’s a relentlessly grim film, a vision of a future that offers up zero hope.  It’s a thoroughly bleak film, one that’s made all the more powerful by the fact that all of the characters just seem like ordinary people who you could meet on any street corner.  As opposed to something like The Day After, in which the main characters included a doctor and a soldier, the characters in Threads have no idea what’s happening to them or what the future might hold.  (One character talks himself into eating a dead sheep despite the fact that it probably died due to radiation poisoning by pointing out that it’s possible that it died of something else.  The Day After at least had John Lithgow around to explain to everyone how radioactivity works.)  Instead, the Becketts and the Kemps simply have to try to survive day-to-day.  Most of them don’t make it.

Threads left me drained and exhausted.  It’s one of those incredibly powerful and grim films that I’ll probably never be able to bring myself to watch again. 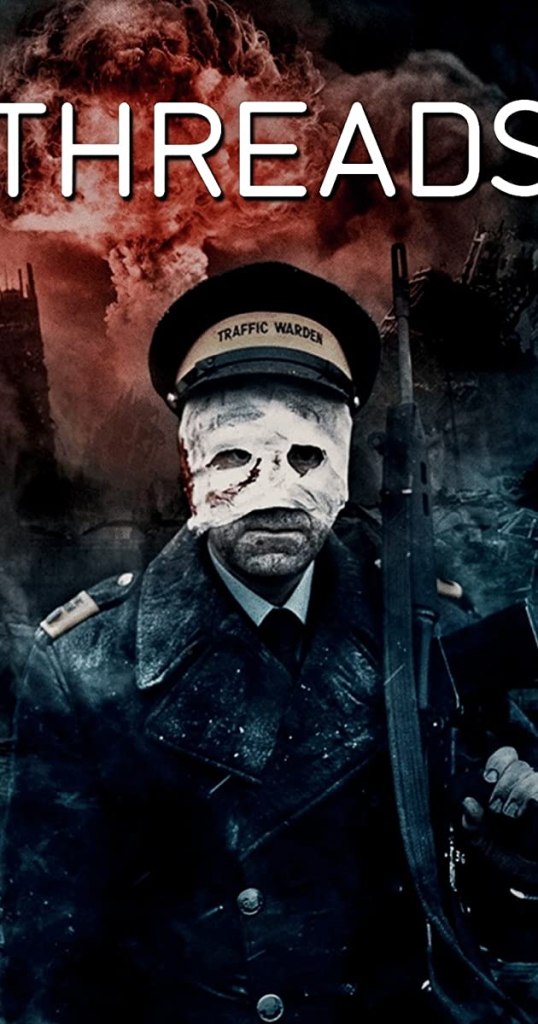 Chuck Brenner (James Brolin) is out shopping when he’s mugged and left unconscious in a men’s room stall.  By the time Chuck wakes up, the store is closed for the weekend and the place is deserted except for him and six doberman guard dogs.  The dogs are trained to hunt down and attack anyone who shouldn’t be in the store and, as far as they’re concerned, that includes Chuck.  Chuck now has to survive the night and try to figure out a way to get out of the store.  Not helping is that Chuck still hasn’t recovered from taking a blow to the head and he’s been bitten by one of the dogs, leaving a blood trail for them to follow.

This made-for-TV movie is a simple but effective thriller about an ordinary man trapped in an extremely dangerous situation.  Frank De Felitta (who would later direct one of my favorite made-for-tv horror film, The Dark Night of the Scarecrow) does a good job of creating suspense as Chuck tries to make it from one area of the department store to the next without getting attacked.  (One of the best scenes involves Chuck, dizzy because he has a concussion, jumping from one cabinet to another while the dogs wait below him.)  Even dog lovers will become nervous as the dobermans prowl the aisles, looking for their prey.  James Brolin gives a good everyman performance and he’s ably supported by Susan Clark as his ex-wife and Earl Holliman as Clark’s new husband.  The film is so well-executed that it was only after it ended that I started to wonder why any store would leave six dog unsupervised in their store overnight.  Just the effort that would have to be made to clean up after them would cancel out whatever money was being saved by not using a human security guard.

Trapped has been released under several titles, the best known of which is The Dobermn Patrol.  My personal favorite, though, is Danger Doberman! 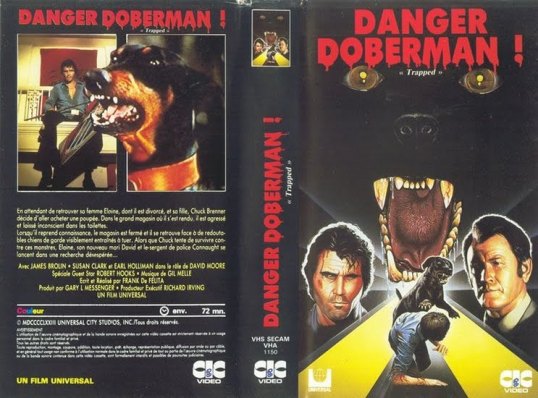 To be honest, of all the trailers that were released yesterday, this the only one that I really cared about.

Here is the 2nd trailer for Wonder Woman 1984!  Looks pretty good, doesn’t it?

I have no idea who Black Adam is or what to make of this trailer but here it is!

I guess the main theme of this trailer is “Dwayne Johnnson’s back and DC’s got him.”

Actually, another reason to see this film is because it was directed by James Gunn.  I’ll watch anything that James Gunn directs.

Another trailer that premiered this weekend was the trailer for Zack Snyder’s cut of Justice League.

Since hardly anyone wants to be associated with Joss Whedon anymore, I assume that this will be the new, official version of Justice League.  I never saw the original release version so I can’t really tell you if this trailer looks like an improvement or not.  (Seriously, I was so annoyed with Batman v Superman that I pretty much just looked at Justice League and said, “No way.”  Not even the presence of Gal Gadot could change my mind)

That said, a lot of people online are really excited about the Snyder cut so here’s the trailer:

This weekend, several trailers were dropped for the upcoming installments in the DC Extended universe.  People on twitter certainly were excited, though I have to admit that, with the exception of Wonder Woman, I’ve never cared much about the DC films.

Then again, that could change.  To be honest, I haven’t been that enthusiastic for the new MCU films.  I’m even kind of dreading Black Widow because the way the character was killed off in Infinity War still bothers me.  Speaking of which, with the exception of killing off Natasha, I loved Infinity War but I have to admit that it kind of felt almost like to perfect an ending for the entire MCU.  All the films that follow will be in its shadow.  Meanwhile, the DC films are still finding themselves and that could potentially be interesting to watch.  Or not.  We all remember Man of Steel.

Then again — and yes, I know, I’m indecisive — it’s hard for me to get excited for yet another Batman film.  “This Batman is dark and serious!”  Oh, you mean as opposed to all the other recent Batman films?  Y’know why people loved LEGO Batman?  Because it was willing to poke fun at itself and the character.

Anyway, here’s the trailer for The Batman, with Robert Pattinson in the lead role.  I think Robert Pattinson is an excellent actor who has more than proven that he deserves to be known for more than just playing Edward Cullen.  For the record, though this is a DC film, it’s apparently not considered to be a part of the DCEU.  So, I guess maybe it’s taking place in the same cinematic universe as Joker.

(Seriously, it’s kind of hard to keep all these universes straight….)