It seems like whenever there’s any sort of disaster, people are advised to seek shelter.  Often, if the disaster is national news, people are told to take shelter in their basement, as if everyone in the world has a basement.  This is a bit of a pet peeve of mine because I live in North Texas, where the land is completely flat and no one has a basement, a cellar, or any other sort of underground shelter.  (We also don’t have mud rooms and, in fact, I’m not even sure what a mud room is.)

That said, there’s a part of me that’s glad that it would be impossible for me to take shelter because, from what I’ve seen in the movies, it appears that spending months in a shelter can actually be worse than dying in a disaster.

The Divide opens with several people watching while a mushroom cloud blooms over New York City.  Eight of those people all end up taking shelter in the same basement.  While that means that they don’t get incinerated by the nuclear blast, it also means that they now have to figure out how to live together.  That’s not going to be easy because it doesn’t take long to realize that none of these people should be anywhere near each other.

For instance, there’s Mickey (Michael Biehn).  Mickey’s the one who built the shelter.  He says that he specifically built it so that, in case of a nuclear war or a terrorist attack, he could safely sit underground and laugh at everyone dying above him.  That’s not a nice sentiment but Mickey is played by Michael Biehn so he’s still one of the more likable characters in the film.

There’s Josh (Milo Ventimiglia) and his brother Adrien (Ashton Holmes) and their friend Bobby (Michael Eklund), three idiots who are clearly destined to end up going crazy before the ordeal is over.

There’s Eva (Lauren German) and her boyfriend, Sam (Ivan Gonzalez), who are both obviously destined to be the voices of reason to which no one is going to listen.

And then there’s Marilyn (Rosanna Arquette) and her daughter (Abby Thickson), who are there because it’s not a shelter-movie without a child being put in jeopardy.

Lastly, there’s Devlin (Courtney B. Vance), who is there to be the older authority figure who ultimately fails to exercise much authority.

After an effectively chilling scene where the basement is briefly invaded by some mysterious men in Hazmat suits, The Divide settles down to be a fairly predictable and, to be honest, rather unpleasant examination of a group people going crazy from the stress of being trapped together.  It may seem odd to complain that a film about the aftermath of a nuclear apocalypse was unpleasant and I guess it is.  But The Divide runs a little over two hours and it’s so relentlessly bleak and everyone is ultimately so nasty that it becomes a bit of a chore to sit through.  By the time the torture scenes begin, The Divide has slipped into Hostel territory and it’s hard not to feel that the film is being grotesque simply for the sake of being grotesque.

That said, the film does have its strength.  The shelter is an effectively claustrophobic location and Michael Biehn does what he can with the role of Mickey.  When some of the characters end up getting radiation sickness, it creates some effectively scary visuals.  I mean, if you ever thought it would be cool to poison yourself with radiation, this film will change your mind.  That’s a good thing, I suppose.

The Divide is a very long movie about some very unpleasant people in an even more unpleasant situation.  It’s well-made but not particularly entertaining to watch.  In the end, it’s easy to feel that everyone would have been better off just staying above ground and getting it over with. 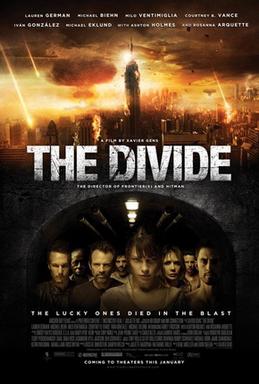 This one is coming out on December 8th.  Basically, a bunch of doctor witness an illegal robot raid and then end up getting pursued by the robots themselves.  My money is on the robots but we’ll see who wins in December.

That’s always a good question.  The usual answer is that your either in Purgatory or you’re having a dream or someone is trying to drive you crazy by making you think that you died and then came back to life.

I don’t know if any of that is true about the upcoming film, Death of Me, but I do like the trailer.

And here it is:

Death of Me is scheduled to be released on October 2nd.

The trailer for Scare Me features a man and woman staying in a cabin in the woods and attempting to scare one another.  Seriously, that’s the whole trailer.  I assume that there’s more to the movie but who knows.  Maybe that’s the whole movie, too.

Personally, I can relate.  Jeff and I played the same game the last time we were up at Mt. Nebo.  I have to admit that I get scared a bit more easily than the people in this trailer.  In fact, when I was six, I was scared to death that this barn near our house was haunted and I used to imagine seeing all sorts of things in the shadows of that barn.  And then, when I was 11, I was outside in the front yard and it suddenly occurred to me that there could be a lion or a tiger inside my house.  So, I literally sat out on the front porch until my mom came home and opened the door and showed me that there weren’t any wild animals in the living room.  So yeah, definitely, I can relate….

Anyway, here’s the trailer for Scare Me!

In the future, all drugs and alcohol are illegal.

Except for one night a year….

Wait a minute. This sounds familiar.  Is this a part of The Purge franchise?  Or is it just another Vince Vaughn party comedy?  I guess we’ll find out — well, some of us will — on August 28th when the film premieres on Hulu.

For the record, I don’t drink but I probably would if I was told I couldn’t.  You know how that goes.

Here’s the trailer for The Binge: 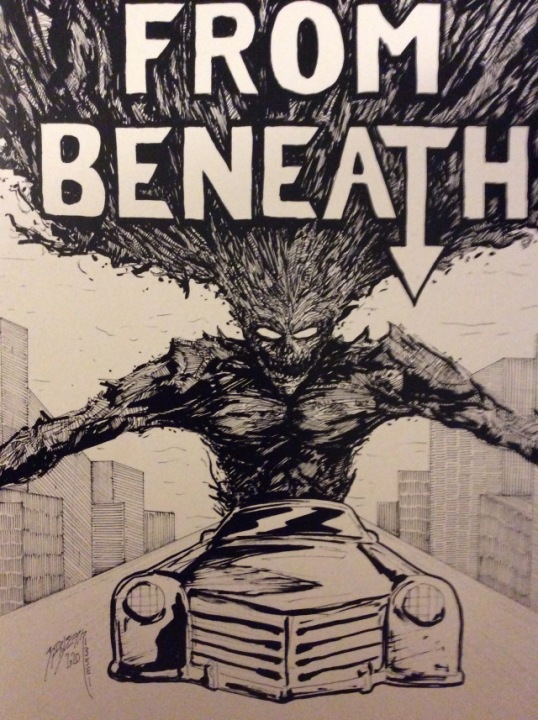 I don’t know anything about cartoonist Brian Beaver, but so what? Maybe the contents of his recent self-published comics ‘zine From Beneath tell me all that I actually need to know.

“Let your work speak for itself,” they’ll tell you in art school (I think, at any rate, never having actually attended it myself), and Beaver certainly takes that advice to heart, as literally no one else speaks at all — and by “no one,” I mean any of his cast of characters, be they insectoid-lensed secret agents of unknown origin, or demonic intergalactic/interdimensional monsters of even more unknown origin — but that’s okay at the beginning, downright great by the time things really get going, and flat-out inspired when all said and done. In fact, dialogue or captions would really just get in the way here.

Beaver’s linework is stunning in terms of its detail and fluidity, and…

When civil engineer Carl Miller (James MacArthur) discovers that the Madison Bridge is on the verge of collapsing, he goes to his superior (Philip Baker Hall!) and explains that the bridge has to be closed down or people could die.  Since there wouldn’t be a movie if anyone listened to Carl’s concerns, he’s ignored.

No sooner has Carl been told that he doesn’t know what he’s talking about than the bridge suddenly starts to collapse.  With both ends of the bridge collapsing into the river below, a diverse group of people find themselves stranded in the middle.  The group is made up of the usual group of disaster movie characters and, of course, one of them is played by Leslie Nielsen.  This time, Nielsen is a crooked businessman with a mistress (played by Barbara Rush) and a baby to worry about.  Eve Plumb (who was a member of the original Brady Bunch) is a nun.  Richard Gilliland is a wounded cop.  Gregory Sierra is a landscaper.  Perhaps most improbably, clean-cut Desi Arnaz Jr. is a bank robber who keeps losing his temper and pointing a gun at everyone.  Carl has to figure out how to get everyone off of the bridge before the entire things collapses.  This leads to many shots of chunks of concrete falling off what’s left of the bridge, as if we need to be reminded that it’s dangerous to be on a bridge that’s in the process of very slowly collapsing.

After finding success making movies about fires, overturned ocean liners, volcanoes, cave-ins, and killer bees, I guess it only makes sense that Irwin Allen would finally get around the producing a movie about a collapsing bridge.  The Night The Bridge Fell Down was filmed in 1980 but it wasn’t aired until 1983.  When it did air, it played opposite the series finale of M*A*S*H, which remains one of the highest rated single episodes of television ever aired.  It’s obvious that no one had much faith in a three hour film about a collapsing bridge and it only aired because NBC needed something — anything — to air at a time when they knew no one would be watching.

Because of the lengthy amount of time between the film’s production and it’s airing, The Night The Bridge Fell Down is the type of serious and plodding disaster film that was popular in the 70s but, by the time 1983 rolled around, had been rendered obsolete by the satiric bards of Airplane!  Airplane‘s Leslie Nielsen even appears here, giving the type of serious performance that he specialized in before people discovered that he was actually a very funny man.  Nielsen doesn’t give a bad performance but everything he says is thoroughly undercut by how difficult it is to take Leslie Nielsen seriously.  No matter what Nielsen says, it always seems like he’s on the verge of adding, “And don’t call me Shirley.”

The main problem with The Night The Bridge Fell Down is that it’s a three-hour movie and that’s a long time to spend with a group of thinly characterized people on a bridge.  I guess the film does feature an important message about maintaining roads and bridges.  Watch it next Infrastructure Week.