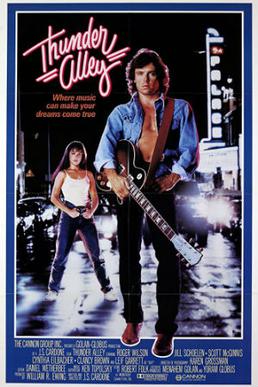 Richie (Roger Wilson) is an Arizona farm boy who can play the guitar like a riot and who, after he joins a band called Magic, discovers that success is a hideous bitch goddess.

Thunder Alley was a Cannon production and it features all of the usual rock movie clichés.  Though Richie is reluctant to join Magic and leave his family behind, he soon emerges as the most talented member of the band and he starts to overshadow the arrogant lead singer, Skip (Leif Garrett).  Donnie (Scott McGinnis), who is Richie’s best friend in the band, gets hooked on cocaine while Richie struggles to resist groupie temptation and remain loyal to his sweet girlfriend, Beth (Jill Schoelen).  The band depends on their road manager, Weasel (Clancy Bown), to get them on stage in time and to protect them from dishonest club owners.

As predictable as it may be, Thunder Alley is one of the better films to be distributed by Cannon Films in the 80s, which is saying something when you consider that Thunder Alley doesn’t feature Michael Dudikoff, Chuck Norris, or Charles Bronson.  The thing that sets Thunder Alley apart from so many other similar films is that, when you actually see Magic perform and hear their music, you actually believe that the band could be a success.  This isn’t one of those films where everyone is feigning enthusiasm for a band that sounds terrible.  Instead, Magic actually sounds like a band that could have gone all the way in 1985.  The scenes of them going from one cheap motel to another while coming together as a band feel as authentic and real as the scenes of Skip angrily realizing that Richie has replaced him as the face of Magic.

Though he was probably cast because he was one of the stars of Porky’s, Roger Wilson was also an actual musician and he’s credible whenever he’s performing on stage.  The same can be said of former teen pop idol Leif Garrett, who plays an actual rock and roller in Thunder Alley and who is surprisingly convincing in the role.  Sporting an impressive beard, Clancy Brown is the ideal road manager while Jill Schoelen brings a lot of life to her small role as Richie’s loyal girlfriend.

For a film that is all about sex, drugs, and rock and roll, Thunder Alley has an innocent side.  Even after he becomes a star and he’s got groupies going crazy every time he steps up to a microphone, Richie’s main concern is making sure that he gets home in time to help his father with the harvest.  Thunder Alley not only asks how far you would go to be a star but also suggests that there’s nothing wrong with choosing, instead, to be a loyal boyfriend or a good son.  Thunder Alley brings it own earnest approach to all of the usual rock and roll clichés and suggests that, with the right combination of talent and hard work, you can have it all, the farm and the stage.

Of course, it helps if you’ve got Clancy Brown looking out for you.