“Where were the parents?”

That’s what we ask ourselves after every school shooting, isn’t it?  Because the perpetrators are usually not around to explain themselves, there’s a tendency to look to the shooter’s parents and to demand to know how they could have allowed things to get so out of control.  The assumption almost always is that the parents were negligent.  If only the shooter’s mother or father had done a better job, we’re led to believe, the tragedy could have been prevented.  It’s human nature.  When faced with an unspeakable tragedy, people need someone to blame.

Of course, an actual examination of the history of most school shooting does reveal some bad parents but it also reveals parents who did their best under difficult circumstances or who were as fooled by their children as everyone else in the world.  Yes, there are the parents who gave their obviously unstable children guns.  But there are other parents who tried to get their children help and who tried to be tough disciplinarians and who sincerely believed that that their children were doing better in school or life or whatever.  And if a parent does suspect that their child is a sociopath, what are they to do?  Are they supposed to stop loving that child and cast them away?  Too often, the trauma of violence leads people to seek out easy answers but often times, those easy answers are not there.  We forget that no one sets out to raise a monster.

M.O.M. Mother of Monsters is a found footage film that attempts to explore some of these issues.  Abbey Bell (Melinda Page Hamilton) is a single mom who suspects that her 16 year-old son, Jacob (Bailey Edwards), might be a psychopath.  So, she plants hidden cameras around her house and she obsessively films their every interaction.  She says that she’s doing it so that she can prove that her son is dangerous and also so she can help all of the other mothers out there who are struggling to raise psychotic children.

And yes, Jacob is certainly obnoxious.  He’s frequently angry and he makes inappropriate jokes about killing people.  He spends a lot of his time locked away in his room and he throws a fit when Abbey tries to take away his Playstation.  He’s casually racist and he listens to loud and angry music and he’s a habitual liar.  From the time he was 6 years-old, he’s been drawing disturbing pictures.  The question, though, is whether he’s the next school shooter or if he’s just a 16 year-old boy.

Not helping matter is that Abbey herself seems to be even more unstable than her son.  Abbey gets as mad at her own mother as Jacob does at her and she continually talks about whether or not evil is hereditary.  Throughout the film, there are dark hints about an incident that occurred before Jacob was born.  When we’re told that Abbey majored in psychology, we find ourselves wondering if she’s trying to use Jacob an his bed behavior to justify her own fears and obsessions.  Who is the bigger threat, Jacob or Abbey?  The film keeps you guessing all the way up to its violent conclusion.

The first two thirds of M.O.M. works pretty well.  Though I’m usually not a fan of the found footage genre, M.O.M. actually comes up with a believable justification for the constant filming.  It also makes good use of its low budget, setting almost all of the action in one claustrophobic house.  Bailey Edwards and especially Melinda Page Hamilton do a great job playing the two main characters and the film keeps you guessing as to whether Abbey is right to be concerned or if she’s projecting her own instability onto her son.

Unfortunately, the final third of the film features a plot twist that just didn’t work for me.  While I imagine that it will work for some people, it was just a bit too implausible for me to accept and the twist’s clumsy execution took me out of the film’s carefully constructed reality.  The film went from being an intriguing character study of two damaged people to just being another found footage thriller.  As such, the film’s final disturbing image didn’t quite have the power that it perhaps would have if not for that final twist.

That said, the first part of the film was undeniably effective and that’s enough for me to recommend it.  If nothing else, this film identities Tucia Lyman as a director to watch out for.  According to the imdb, this was first narrative feature film and she did a good job using the familiar rules of the found footage genre to tell an intriguing story.  I look forward to her second film. 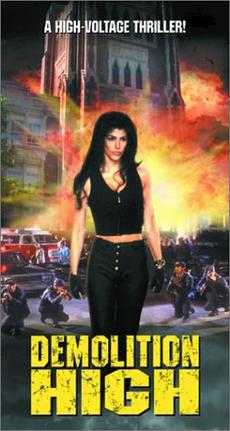 A group of terrorists take over a high school and announce that, unless their demands are met, they will launch a nuclear missile at a nuclear power plant which I guess will cause double the nuclear destruction.  Since they already have a nuclear missile, it feels like also threatening to blow up the power plant is definite overkill.  With the school now full of terrorists and explosives, it’s up to one student to kill the terrorists one-by-one and save his classmates.  It’s Die Hard in a High School (cool!), with the Bruce Willis role being taken on by … COREY HAIM!

That bit of casting tells you both why Demolition High doesn’t work and also why anyone would be watching this direct-to-video “action” film in the first place.  The 25 year-old Haim plays Lenny Slater, a high school student who knows Kung Fu because he grew up in the Bronx.  His father (played by Alan Thicke!) moves to a small town, both to become a police chief and to hopefully keep Lenny from getting into any more trouble.  Lenny’s all trouble, though, and terrorist leader Luther (the great Jef Kober) is about to discover that he’s invaded the wrong high school.

If I had watched this film in the 90s or even the early aughts, I would have laughed at how bad Corey Haim is as an action hero but today, knowing all we know about his life and how Hollywood essentially enabled his worst tendencies and then abandoned him when he become too self-destructive to work, it’s not as easy to watch an obviously troubled actor who has gone from being a big star to appearing in a direct-to-video Die Hard rip-off.  Trying to disguise the fact that he’s too old to be playing a high school student, Haim wears a flannel shirt and an earring and has a bowl cut.  Whenever he talks to his classmates, you expect him to say, “How do you do, fellow kids?”  As heavily edited as the fight scenes are, it’s still obvious that Haim had no idea how to throw a punch.  On the plus side, even while obviously addled by drug abuse, Corey Haim was still a better actor than Stephen Seagal.

Demolition High is pretty dumb but it was directed by Jim Wynorski so at least there’s some inside jokes.  Gerrit Graham and Dick Van Patten both have small roles and Alan Thicke gets to tell an FBI agent to “Think with your heart, not with your badge.”  Wynorski also cast Melissa Brasselle as Tayna, a sexy terrorist who wears black leather.  He deserves some credit for that.  (When the film was released on video, Brasselle was featured on the cover, not Haim.)  Some of the techniques that Lenny uses to take out the terrorists are creative, if never really plausible.  In this case, Lenny is helped by the stupidity of the terrorists.  It’s not every evil terrorist who is clumsy enough to stumble head first into a table saw.

Demolition High was apparently successful enough to be followed by a sequel, Demolition U.  I’ll look at the movie tomorrow.

Today’s song of the day comes from Ennio Morricone’s score for Exorcist II: The Heretic.  This is not a film with a great reputation but I think almost everyone agrees that it has a great score.

This is Regan’s Theme.  This song was also later used in Quentin Tarantino’s The Hateful Eight.