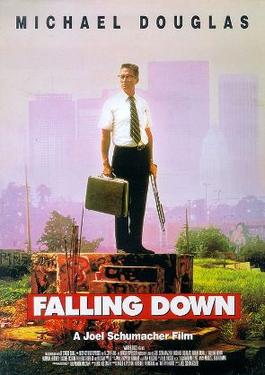 Earlier today, when I heard that Joel Schumacher had died, I immediately thought of Falling Down.

Falling Down stars Michael Douglas as William Foster, a man who is at the end of his rope.  He’s lost his job.  He’s just gotten a divorce and his wife has taken a restraining order out against him.  On the hottest day of the year, his car’s air conditioning has just broken down.  When he finds himself stuck in a traffic jam, he impulsively abandons his car and starts to walk across Los Angeles, collecting weapons, enemies, and admirers along the way.

Almost everyone who Foster meets annoys him in some way.  A convenience store clerk refuses to give him change so that he can make a phone call.  In the film’s most famous scene, a fast food restaurant refuses to allow him to order off of the breakfast menu, which leads to Foster pulling out a gun.  D-Fens, as he’s now known due to his personalized license plate, is making his way to his daughter’s birthday party, leaving behind  a wake of destruction behind him.  Trying to stop him is Detective Martin Prendergrast (Robert Duvall), who is, naturally, just a day away from retirement.

I think about Falling Down a lot.  It’s always been a controversial film, with critics debating whether we’re supposed to empathize with Foster or not.  The film itself often tries to have it both ways, asking us to condemn Foster’s violence while, at the same time, expecting us to cheer for him when he expresses his frustrations.  On the one hand, you can understand some of his anger.  Why can’t you order off the breakfast menu if you want to?  Who hasn’t gotten annoyed with unnecessary road work?  At the same time, it’s also hard to overlook that almost all of Foster’s victims are more obnoxious than he is.  If the store clerk has been polite when he refused to give him change, would we have still cheered when Foster destroyed the store?  Foster even has an encounter with a white supremacist that’s supposed to assure us that Foster might be an angry white man but he’s the right type of angry white man.

To understand why this film has always stuck with me, you have to understand that my Dad was an engineer.  He worked with a lot of people who basically were William Foster, except that they never got their hands on as much weaponry as Foster manages to do.  Whenever I see this movie and I see Michael Douglas with his nerdy glasses and short-sleeved white shirt and black tie, I’m reminded of visiting my father at work and listening to his co-workers complain about how much they hated the rap music that their kids were listening to.  From those experiences, I can tell you that Michael Douglas perfectly nails the role of William “D-Fens” Foster.  Though the film’s script may sometimes try to present Foster as simply being “a man who has finally had enough” (and that’s certainly the way that Foster would probably view himself), Douglas gives a much more complex performance in the role.  He plays Foster not as being a hero or even an anti-hero.  Instead, he’s a man who has realized that life is never going to be as good as he was told it would be and, watching the world change around him, he’s snapped.  He’s the villain, even if he and some of the film’s biggest fans don’t realize it.  “I’m the bad guy?” he asks and yes, he is.  The tragedy of the film is that he can’t understand how that came to be.  Neither Joel Schumacher as a director nor Michael Douglas as an actor ever suggests that Foster has become a stronger or happier person as a result of his actions.  He never becomes the societal avenger that some may want him to be.  Instead, he just wants to get to his daughter’s birthday party.

When Joel Schumacher’s death was announced today, most people talked about the Batman films that he directed.  However, Falling Down, with its brilliant lead performance from Michael Douglas, is the Joel Schumacher film that will always stick with me.

One response to “Falling Down (1993, directed by Joel Schumacher)”