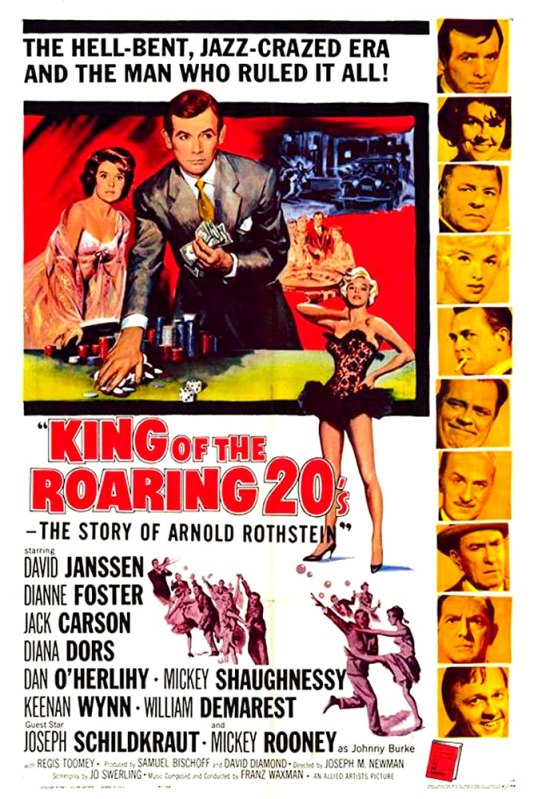 The 1961 gangster biopic, King of the Roaring ’20s: The Story of Arnold Rothstein, tells the story of two men.

David Janssen is Arnold Rothstein, the gambler-turned-millionaire crime lord who, in the early years of the 20th Century, was one of the dominant figures in American organized crime.  Though he may be best-remembered for his alleged role in fixing the 1918 World Series, Rothstein also served as a mentor to men like Lucky Luciano, Meyer Lansky, and Bugsy Siegel.  Rothstein was perhaps the first gangster to to treat crime like a business.

Mickey Rooney is Johnny Burke, Arnold’s best friend from childhood who grows up to be a low-level hood and notoriously unsuccessful gambler.  Whereas Arnold is intelligent, cunning, and always calm, Johnny always seems to be a desperate.  Whereas Arnold’s success is due to his ability to keep a secret, Johnny simply can’t stop talking.

Together …. THEY SOLVE CRIMES!

No, actually, they don’t.  They both commit crimes, sometimes together and sometimes apart.  Perhaps not surprisingly, Arnold turns out to be a better criminal than Johnny.  In fact, Johnny is always in over his head.  He often has to go to his friend Arnold and beg him for his help.  Johnny does this even though Arnold continually tells him, “I only care about myself and money.”

The friendship between Arnold and Johnny is at the heart of King of the Roaring 20s, though it’s not much of a heart since every conversation they have begins with Johnny begging Arnold for help and ends with Arnold declaring that he only cares about money.  At a certain point, it’s hard not to feel that Johnny is bringing a lot of this trouble on himself by consistently seeking help from someone who brags about not helping anyone.  From the minute that the film begins, Arnold Rothstein’s mantra is that he only cares about money, gambling, and winning a poker game with a royal flush.  Everything else — from his friendship to Johnny to his marriage to former showgirl Carolyn Green (Dianne Foster) to even his violent rivalry with crooked cop Phil Butler (Dan O’Herlihy) — comes second to his own greed.  The film’s portrayal of Rothstein as being a single-minded and heartless sociopath may be a convincing portrait of the type of mindset necessary to be a successful crime lord but it hardly makes for a compelling protagonist.

Oddly enough, the film leaves out a lot of the things that the real-life Arnold Rothstein was best known for.  There’s no real mention of Rothstein fixing the World Series. His mentorship to Luciano, Lansky, and Seigel is not depicted.  The fact that Rothstein was reportedly the first gangster to realize how much money could be made off of bootlegging goes unacknowledged.  By most reports, Arnold Rothstein was a flamboyant figure.  (Meyer Wolfsheim, the uncouth gangster from The Great Gatsby, was reportedly based on him.)   There’s nothing flamboyant about David Janssen’s performance in this film.  He plays Rothstein as being a tightly-wound and rather unemotional businessman.  It’s not a bad performance as much as it just doesn’t feel right for a character who, according to the film’s title, was the King of the Roaring 20s.

That said, there are still enough pleasures to be found in this film to make it worth watching.  As if to make up for Janssen’s subdued performance, everyone else in the cast attacks the scenery with gusto.  Mickey Rooney does a good job acting desperate and Dan O’Herlihy is effectively villainous as the crooked cop.  Jack Carson has a few good scenes as a corrupt political fixer and Dianne Foster does the best that she can with the somewhat thankless role of Rothstein’s wife.  The film moves quickly and, even if it’s not as violent as the typical gangster film, it does make a relevant point about how organized crime became a big business.

It’s not a great gangster film by any stretch of the imagination and the lead role is miscast but there’s still enough about this film that works to make it worth a watch for gangster movie fans.

76 years ago, the real anti-fascists stormed the beaches of Normandy and turned the tide of World War II.  Every year, we celebrate the anniversary of D-Day but hopefully we will never forget what it represents.  Over 4,000 men sacrificed their lives on that day in a battle against the greatest evil the world had ever known.  All of us today owe them  a debt a gratitude.

The pictures below were all taken on D-Day: 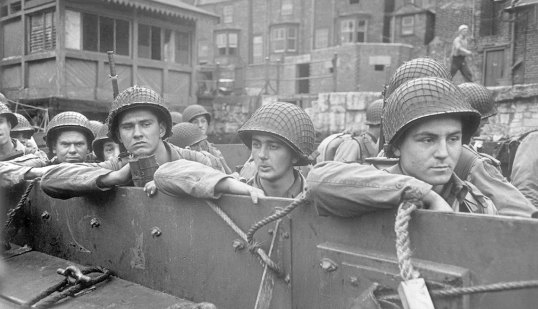 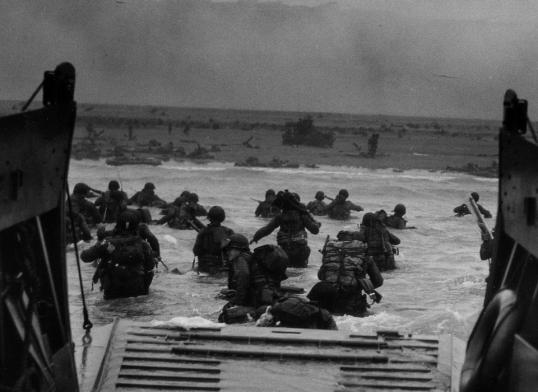 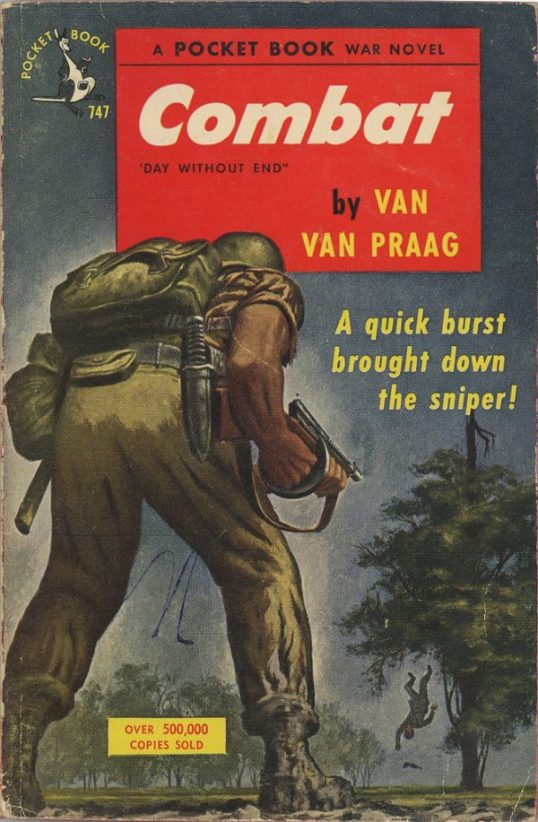