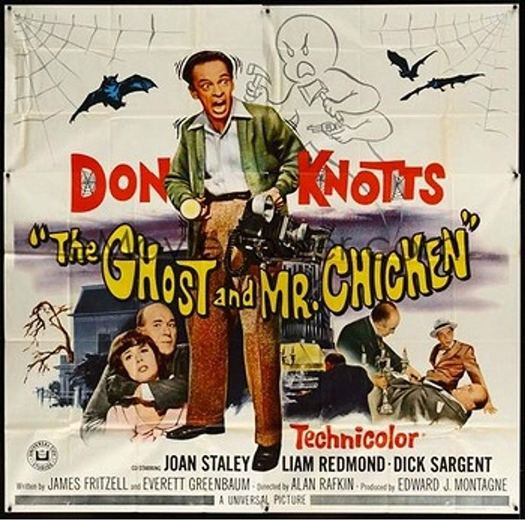 When the conversation turns to great screen comedians, Don Knotts doesn’t get a lot of respect among the cognescenti. Talk to his loyal fandom, including celebrities like Jim Carrey and John Waters, and you’ll hear a different tune. They all agree – Knotts was a talented and funny comic actor, the quintessential Everyman buffeted about by the cruelties of fate who eventually triumphs against the odds. Following his Emmy-winning five-year run as Deputy Barney Fife on THE ANDY GRIFFITH SHOW , Knotts signed a movie contract with Universal, and his first feature for the studio was the perfect vehicle for his peculiar talents: a scare comedy titled THE GHOST AND MR. CHICKEN.

Knotts plays Luther Heggs, a meek typesetter for his local newspaper in the small town of Rachel, Kansas. He’s also somewhat of the town laughing-stock, bullied by the paper’s ace reporter Ollie, his rival for the affections… 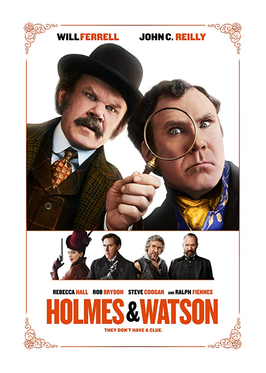 Will Ferrell is Sherlock Holmes!

Together, they get really bad reviews!

Well, that and solve crimes and protect royalty.  Holmes & Watson, which came out this previous Christmas, features Sherlock and John attempting to prevent Professor Moriarty (Ralph Fiennes) from assassinating Queen Victoria.  Watson, being the proud Englishman that he is, is an obsessive fan of Queen Victoria.  In fact, he’s such a fan that, upon meeting her, he insists that she pose for a “self-photography” with him and Holmes.  Of course, cameras back then were a lot bigger and more bulkier than cameras today so Watson ends up bashing the Queen in the head.  Watson and Holmes are terrified that they’ve killed the Queen.  But then she wakes up.  That’s the joke.

Holmes & Watson isn’t so much a parody of the original Sherlock Holmes stories as much as it’s a parody of the Guy Ritchie films that almost everyone has already forgotten about.  Of course, it can be argued that the Guy Ritchie films were, themselves, parodies which makes Holmes & Watson a parody of a parody.  (Now, we just need someone to parody Holmes & Watson so that the universe can collapse in on itself.)  As a result, the film opens with a young Sherlock Holmes being tricked into kissing a donkey’s ass and then it progresses to an adult Holmes using his deductive powers to deduce that a man is a compulsive masturbator.  The film never seems to be quite sure if its version of Holmes is meant to be an eccentric genius or an overrated bungler and Will Ferrell’s inconsistent performance doesn’t help matters.  When Holmes starts to incorrectly suspect that Watson has betrayed him, we don’t know if we’re supposed to share Watson’s feeling of betrayal or if this is just another case of Holmes being a brilliant idiot.  The film doesn’t seem to know either.

In the role of Watson, John C. Reilly is expected to do most of the dramatic heavy lifting.  He gets several scenes in which he discusses how difficult it is to always be the sidekick.  It’s a role that Reilly has played in several other films and perhaps that explains why he seems so bored in this movie.  We’re all kind of used to Will Ferrell being an inconsistent performer but it’s far more depressing to see John C. Reilly sleepwalking through a film.

Anyway, Holmes & Watson is not a film that I normally would have wasted my time seeing but, with so many people proclaiming it to be not only the worst film of 2018 but the worst film of all time, I felt that I had a certain obligation to do so.  After all, I’ll be posting my worst of and best of lists over this upcoming week and Holmes & Watson seemed like it would be a legitimate contender for one of those lists.  Having now seen the film, I can say that it’s pretty bad.  Unfortunately, unlike some other bad films, it’s also rather dull and forgettable.  It’s certainly far more dull than any film featuring John C. Reilly, Ralph Fiennes, Rebecca Hall, Hugh Laurie, Steve Coogan, and Kelly MacDonald has any right to be.  It’s a comedy where so many of the jokes fall flat that even the jokes that do work kind of suffer just by association.  Usually, I would have laughed at the film’s Billy Zane cameo but I was still annoyed by the film’s unnecessary musical number so I merely chuckled.

If Holmes & Watson has a saving grace, it is that it’s just a silly comedy.  It’s not really pompous enough to justify the claim that some have made that it’s the worst film of all time.  It’s neither as smug as Vice nor as pretentious as Life Itself.  In fact, it’s not even the worst comedy of the year.  (That honor would belong to The Happytime Murders.)  What Holmes & Watson is, is a huge disappointment.  With all the talent involved, you would hope that the film would be a bit more memorable. 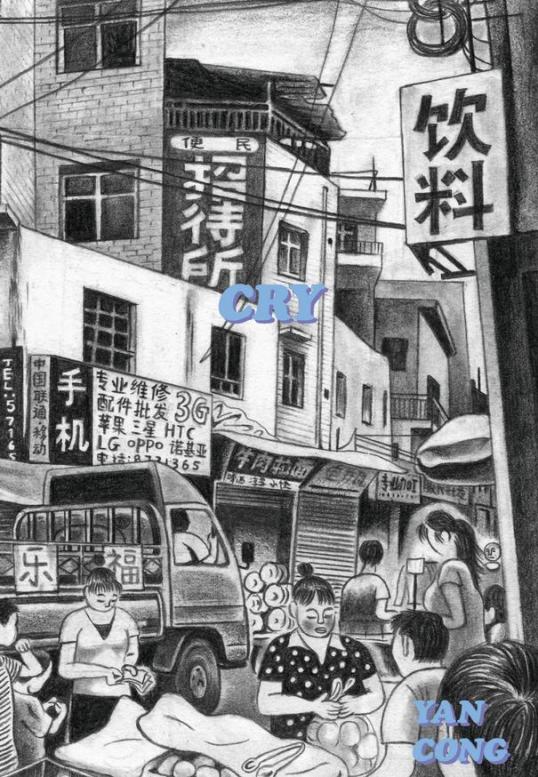 Rendered in a combination of pen and graphite with exquisitely emotive precision, groundbreaking Chinese “alternative” cartoonist Yan Cong’s 2018 Paradise Systems release, Cry, is a sumptuous feast for the eyes, of that there is no doubt. But being that its brisk, economic narrative is primarily focused on immediate-post-break-up loneliness, what will surely surprise many is that it’s also a feast for the heart.

Not an easy one to consume, by any standard of measure, but one that lingers deliciously, that seeps in, its flavors revealing themselves over time as the work is allowed to stew, simmer, and be digested slowly. Yeah, I’m hungry as I write this — is it that obvious?

Ostensibly, this short-but-conceptually-dense book is about a guy, and a fairly typical-seeming one at that, who apparently does what a lot of typical guys do : takes his girlfriend for granted, doesn’t take time to understand her…


One of my New Year’s resolutions was to …. *checks notes* …. share more from Steve Aoki on this site so I guess I better get around to honoring that resolution by sharing the oddly disturbing video for Wake Up Call.

I’ve actually come across some online criticism of Wake Up Call, with the most frequent complaint being that it sounds “messy and confused” but personally, I think that’s kind of the point.  It’s all about the sensation of being jarred awake, of being snapped out of a dream and into the real world.  Everyone wakes up messy.  Everyone wakes up confused.  The messiness is kind of the point here.  Seriously, whenever I wake up, it always takes me a few minutes to realize where I am and then it takes me even longer to get my hair out out of my face.  Sleep is messy, which is why I try to get as little as possible of it.

As for the video …. AGCK!  I mean seriously, what the Hell is going on?  Is Steve Aoki trying to kill Clifton Collins, Jr?  Or is Michelle Rodriguez just dreaming that Aoki is strangling her …. well, I want to say lover but they don’t really appear to be too much in love.  Who is dreaming in this video and who needs to “WAKE UP?”  Personally, I think Michelle Rodriguez may have seen what Clifton Collins, Jr. was dreaming about so she summoned Aoki from her own dreams, specifically so he could be her vessel of vengeance.  To be honest, the whole thing kind of feels like a Jean Rollin vampire film to me.  And yes, yes …. I know that I tend to compare anything that is the least bit surreal to a Jean Rollin vampire film but that doesn’t make the observation any less pertinent.

Of course, it’s also possible that there might not be any definite explanation as to just what exactly is happening.  Perhaps the point.  Like life, the video may mean whatever we want it to mean.

Now, I will admit that I did attempt to search around online and find what other people thought this video was about.  Unfortunately, almost every link that I followed led me to someone talking about the video for Maroon 5’s Wake Up Call.  I’d actually like to see someone remake Begin Again with Steve Aoki in the Adam Levine role.  I think that would be hella interesting.