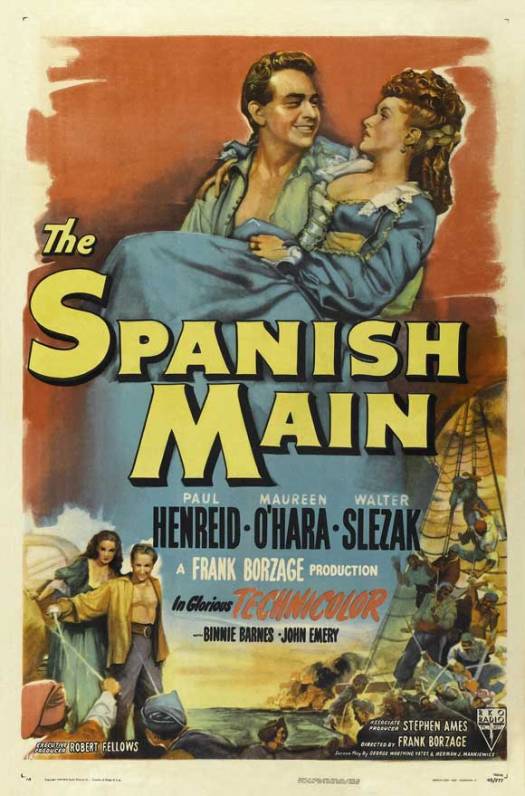 THE SPANISH MAIN is one of those films where the acting is cranked up to 11 and tongues are held firmly in cheek. That’s not a bad thing; this is a fun, fast-paced romp that doesn’t require much thinking, a colorful piece of mind candy that doesn’t take itself too seriously and features a great cast. It’s not what you’d normally expect from director Frank Borzage, usually associated with weightier matters like 7TH HEAVEN, A FAREWELL TO ARMS, THREE COMRADES, STRANGE CARGO , and THE MORTAL STORM. Maybe after all that heavy drama, the veteran needed to lighten up a bit!

Paul Henreid  stars as our hero Laurent Van Horn, a Dutch captain whose ship is wrecked in the Caribbean waters near Cartagena. The Spanish Viceroy there, Don Juan Alvarado (Walter Slezak ), is a tyrant who holds the…

A few years ago, Dan Gilroy, Jake Gyllenhaal, and Rene Russo excited film viewers everywhere when they collaborated on Nightcrawler, a portrait of a psychologically damaged man who proves to be quite adept at playing the media game.  The combination of Gillroy’s atmospheric direction and satirical script with Gyllenhaal’s wonderfully unhinged lead performance made for an incendiary and prophetic film.  Just why exactly Nightcrawler was totally snubbed by the Academy continues to be one of the most perplexing mysteries in recent Oscar history.  Despite strong support from the critics, not even Gyllenhaal picked up a nomination.

Dan Gilroy followed Nightcrawler up with Roman Israel, Esq., which was as forgettable as Nightcrawler was memorable but which still managed to accomplish what Nightcrawler didn’t.  It received an Oscar nomination for its leading man.  One gets the feeling that nomination had more to do with Denzel Washington’s reputation for award-worthy work than for anything that actually happened in the movie.  Gyllenhaal went on to give award-worthy performances in films like Southpaw and Stronger but the Academy has continued to snub him.  As for Russo, she’s only appeared in three films post-Nightcrawler and none of them were worthy of her talents.

Well, this year, Gyllenhaal, Russo, Gilroy, and Nightcrawler‘s cinematographer, Robert Elswit, have reunited for Velvet Buzzsaw!  That’s right, they’ve got the band together again!  The film appears to be a mix of horror film and an art world satire.  As the film’s plot description puts it: After a series of paintings by an unknown artist are discovered, a supernatural force enacts revenge on those who have allowed their greed to get in the way of art.  The trailer would seem to suggest that paintings themselves are coming to life to enact revenge on sell-outs, everywhere.  The idea of haunted paintings has been explored by everyone from Oscar Wilde to H.P. Lovecraft to Lucio Fulci and I look forward to seeing what type of spin Gilroy puts on it.

Along with Russo and Gyllenhaal, this film also features John Malkovich.  Honestly, I don’t think you can do an art world satire without finding a role for Malkovich.  Much as how Bill Paxton simply belonged in Nightcrawler, it seems that Malkovich would just belong in Velvet Buzzsaw.

Velvet Buzzsaw will be playing at this year’s Sundance Film Festival and it will be officially released by Netflix on February 1st!  I get the feeling that we’re either going to love it or we’re going to hate it.  I don’t think there’s going to be much in-between.

Check out the trailer below! 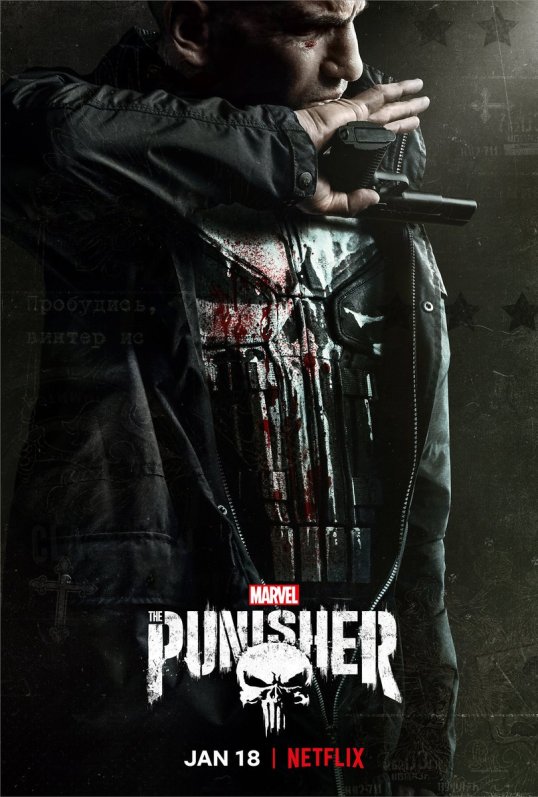 The first season of The Punisher on Netflix ended up being better than what had been advertised. The series and it’s ultraviolent tone became a divisive factor in how the show was scene.

Some saw it as the true adaptation of the titular character and his anti-hero status within the Marvel Cinematic Universe. Others saw it as poor taste considering the rash of mass shootings and gun violence that’s plagued the country the last couple of years.

There was no disagreement in that Jon Bernthal owned and seemed born to play the role of vengeance-fueled and grief-stricken Marine veteran Frank Castle. His portrayal not just of Frank Castle but his vigilante alter-ego, The Punisher, was like watching a force of nature on screen.

It was a no-brainer that a second season of the series would be set into production and Netflix didn’t hesitate. It’s a bit bittersweet knowing that no matter how good season 2 turns out there’s a high probability that this will be the final season of The Punisher on Netflix as every Netflix-produced Marvel show has been cancelled the past year with only the upcoming seasons of The Punisher and Jessica Jones left.


Are we in the past, the present, or the future?  It’s an interesting question and one that’s more relevant than you might think.  I may be writing this in my present but you’ll be reading it in the future, which of course means that I’m currently speaking to you from the past.

What does that have to do with today’s music video of the day?  Perhaps nothing, though I do like the way that this video seems to be a perfect illustration of how people in the past once spent their present visualizing the future.  There are oppressive government agents, all wearing suits.  There are people fleeing after committing some sort of vague, possibly criminal act.  There’s the appropriately decadent club where people dance while the world outside descends into stormy chaos.  Today, this video and this song would be considered to be rather retro but, back in 1997, it was all undoubtedly viewed as being quite futuristic.

Needles to say, I like this video.  With all the rain and its neon noir atmosphere, it’s a video that seems almost as if it’s been excerpted out of a larger movie.  One could easily imagine a 90-minute version of this video, one that would undoubtedly feature a lot more time spent in the storm.  It’s a video that does a very good job at suggesting life under a dystopia and while dystopian societies are terrible when it comes to day-to-day living, they have inspired some memorable music videos.

This video is one of the many Chemical Brothers videos to have been directed by Nick Goffey and Dominic Hawley (better known as Dom & Nic).  According to the imdb, the cinematographer was Simon Chaudoir, who is credited with not only several other music videos but also with working on two episodes of the British spy series, Spooks.  Here in the States, Spooks was known as MI-5.  I watched a few episodes when it aired over here.  It was a stylish show but I quickly learned not to get too attached to any of the characters.