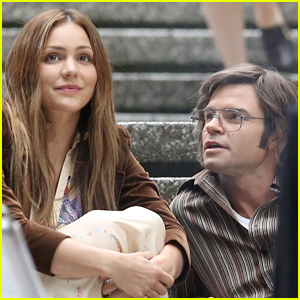 Tonight’s Lifetime premiere was The Lost Wife of Robert Durst, the latest of many films to deal with the 1982 disappearance of Kathie Durst and the subsequent activities of her husband, millionaire weirdo Robert Durst.

The disappearance of Kathie Durst is an intriguing cold case.  Robert Durst was a member of one of the wealthiest and most powerful families in New York.  Many have speculated that may be why Durst was never charged with anything, despite the fact that everyone was convinced that he was responsible for her disappearance.  (Others have pointed out that most of the evidence against Durst was circumstantial and that Kathie’s body has never been found.)  Durst, himself, appears to have spent the last few decades as something of a millionaire hobo.  His best friend, Susan Berman, was murdered in 2000.  (Berman provided Durst with an alibi for the night of Kathie’s disappearance.)  Durst himself eventually turned up in Galveston, where he attempted to disguise himself as a woman and was eventually arrested for murdering his neighbor, Morris Black.  Durst was acquitted in that case.  All Good Things, a feature film starring Ryan Gosling and Kirsten Dunst, led to resurgence of interest in the case of Kathie’s disappearance.  It also led to a HBO documentary series, called The Jinx.  In an act that was either extremely cocky or extremely self-destructive, Durst agreed to be interviewed for the documentary, implicated himself in all three of the murders that he was suspected of committing, and was subsequently charged with murdering Susan Berman.

It’s one of those stories that, when you hear the details, you can hardly believe is true.  It has everything: love, greed, sex, jealousy, politics, the mafia, and several unsolved murders.  It’s not surprising that there’s been several movies and TV shows based on the Durst case.  The problem that every new film faces is what can it add to the story that we haven’t already seen.  The Lost Wife of Robert Durst is relatively well-made but there’s really nothing here that you couldn’t find in All Good Things or The Jinx.  This is like the Wikipedia version of Durst case.  It gives you all the details without going into too much depth about any of it.

Of course, one of the main questions about this case is whether Robert Durst is mentally ill or if he’s just extremely clever.  Those that claim that Durst is crazy tend to point out that he saw his mother commit suicide when he was a young boy, that he has a habit of muttering to himself, and that he lives like a hermit despite all of his money.  Those who claim that Durst is actually very clever and in total control of all of his actions point out that all of Durst’s alleged crimes required extensive planning and that, in The Jinx, he was caught saying, “What the Hell did I do?  Killed them all, of course.”  That would seem to indicate that Durst is fully aware of whatever he may have done.  The question of Durst’s sanity is not a minor one.  In some states, it would be the difference between life in prison and execution.

The Lost Wife of Robert Durst attempts to have it both ways.  As played by Daniel Gillies, Durst is obviously unstable yet clearly calculating at the same time.  In fact, I would argue that, from a purely dramatic point of view, Gillies plays Durst as being a little too obviously unstable.  You find yourself wondering why Kathie (played by Katharine McPhee) would have ever agreed to go out with him in the first place, much less marry him.  As played by McPhee, Kathie is almost as hard to read as Durst.  Even in the scenes depicting the early days of Durst marriage, the lack of chemistry between Gillies and McPhee is a problem.  I spent most of the film wishing that it would dig a little bit deeper into the case.  Then again, considering that Durst has yet to be convicted on any charges, I suppose there’s only so much that the movie could suggest.  (All Good Things changed everyone’s names, which gave it at least a little bit of freedom to speculate.)

That said, the Robert Durst story is such a strange one that, flaws and all, The Lost Wife of Robert Durst is watchable.  It’s a good enough introduction to the case, if you’re looking for one.  Ultimately, though, All Good Things remains the Durst film to watch.