The following is a re-broadcast of the 1955 interview with David Brinkley and Mayor Potter of the eponymous Pottersville.

David Brinkley:  Ladies and Gentlemen this is a portrait of a town that came back.  The best example of which is the bustling Boffo town of Pottersville.   I am interviewing the man who brought this town back after a factory closing and 1920s financial collapse:  Mr… I mean Mayor Potter.

David Brinkley:  Mr. Mayor, your town is synonymous with nightlife and culture.  Now, it is hosting it’s fourth International Film Festival.  It seems to stand out among so many New York factory towns.  What happened?

Mayor Potter:  HRHHPFM! It was a near run thing.

Mayor Potter: We had this flirtation with communism in the 19 teens and 20s.

Mayor Potter:  It’s true.  We had this bolshevik style building and loan.

David: A building and what?

Mayor Potter:  It was a bank … of sorts.  This guy “Pa” Bailey *Uses air quotes with an eye-roll*  would talk rubes into giving him money to build people homes who lacked the money to pay their mortgages.

Mayor Potter: Get this, when you wanted to make a withdrawal you’d either have to wait 60 days or some jackass would use his personal savings to “loan” you money.

Mayor Potter:  This commie bank was always screwing with people’s money.  The owner hired his brother Billy – he was this unreformed drunkard and he had a menagerie of unvaccinated feral animals in his office. And, when this Building and Loan would really squander their funds and bills would come due, Billy would knock on people’s doors holding a wicker basket begging for donations all over town.

David: Wicker? What kinds of animals? What?!

Mayor Potter:  UGGHH, Bailey had everything in there… crows, squirrels, probably had a damn bobcat for all we knew.  Bailey’s in a mental ward now.  But, he wasn’t even the worst…

Mayor Potter:  Try getting a prescription filled back in those days. We had a homicidal druggist poisoning people … Bowser or something or other.   He got locked up and’s dead now …. good riddance.

Mayor Potter: The younger Brother was a war hero and now works for DuPont and designed some weed killer Agent Purple or something.

David: Not to turn this into a geneology of the Baileys.

Mayor Potter: No big deal. George went off to college and married a local girl…Mary. He designs pipelines in Venezuela. Could you imagine if George had tried to keep his Dad’s commie bank going? He would’ve wished he’d never been born!

David: Back to the town, what changed?

Mayor Potter: Well, Pa Bailey died and then the Crash.

David: How did your recover from the crash?

Mayor Potter: Recover?!  The Crash helped us! I bought up the failing businesses and turned this town around.  We needed new revenue from new sources.

David: About that, after the war, Pottersville was criticized for what some called a seamy downtown.

Mayor Potter:  *Shrugs* You’re a veteran.  After the war, people wanted to blow off some steam and that means dancing, music, and booze.  Our downtown is different now.  Even then, it was still better than the boring Bedford Falls anytown USA….Bleh! We’re the only Right To Work county in New York!  What did that bring? Headquarters and more business than Buffalo or Detroit combined!  We have 12 museums, 200 restaurants, a financial center, a subway, and a Theater district second only to New York City!  Besides, nightlife and culture is what brings people to cities.  “Honey, let’s splurge and visit Des Moines… Said no one ever!”

David: You have a point.  This is truly a magnificent achievement.

A long time ago in a galaxy far, far away…

The evil Galactic Empire spent what had to be billions of Imperial credits to build the greatest weapon in the universe.  It was known as the Death Star and it housed a laser so powerful that it could blow up a planet with just one shot.  And yet, for all the effort and all the years that were spent building it, the Death Star had one glaring vulnerability, an exposed exhaust valve that the Rebel Alliance twice used to the destroy it.

For years, fanboys debated why the Empire would go to the trouble to build a super weapon with such an obvious design flaw.  I have to admit that I was often one of them.  No one else seemed to care but, to us, this was a huge deal.  If the Empire could figure out how to blow up a planet with one super laser, why couldn’t they figure out how to protect that one valve?

Now, thanks to Rogue One: A Star Wars Story, we have an answer.  We not only know why that valve was there but we also know what was meant in New Hope when the rebel general said that the plans to the Death Star had been stolen at great cost.

Rogue One is a fan’s dream, one that answers questions while expanding on the Star Wars mythology.  Unlike the previous prequels, it adds to the story without cheapening the original films.  In fact, of all the Star Wars films, Rogue One is the first to make the Death Star into a believable weapon of mass destruction.  When it appears over one planet, it blots out the sun.  When it blows up a rebel base, we see the destruction from inside the base instead of observing it from the safety of Death Star.  Director Gareth Evans does for the Death Star what he previously did for Godzilla.

Unfortunately, like Godzilla, the action and the special effects in Rogue One are usually more interesting than any of the film’s characters.  Felicity Jones, Diego Luna, Donnie Yen, Jiang Wen, Alan Tudyk, and Riz Ahmed are all good actors but they’re all playing underwritten parts.  No one steps up like Harrison Ford did in the original trilogy.  Commander Kennec, played by Ben Mendelsohn, has a little more depth than the typical Imperial villain but, for better or worse, the film’s most memorable performances come from a CGI Peter Cushing and James Earl Jones providing the voice of Darth Vader. 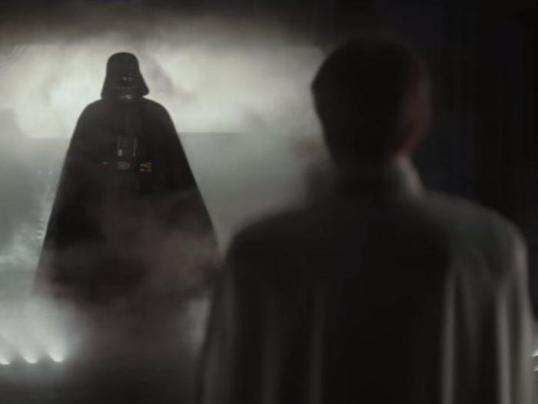 Despite the underwritten characters, Rogue One is still the best Star Wars film since Empire Strikes Back, a return to the grittiness, the thrilling action, and the awe of discovering new worlds that distinguished the first two movies.  For once, a Star Wars film seems to have more on its mind than just selling toys.  Though we already know what is ultimately going to happen to the Death Star at the end of New Hope, Rogue One is a frequently downbeat film.  There are no Ewoks and, to great relief and rejoicing, Jar Jar is never seen.  The closest that Rogue One gets to comic relief is Alan Tudyk providing the voice of a cynical robot.  The emphasis is on the horrors of war and even the rebels are troubled by some of the things that they have done.  For once, the Rebel Alliance actually feels like a rebellion and the evil of the Empire feels real instead of cartoonish.

Rogue One is projected to be the first of many “Star Wars stories,” stand-alone film that will expand the universe and hopefully clarify some of the points that were left unclear by the original trilogy.  I think it’s going to be very successful very Disney.  I’m just dreading the inevitable Jar Jar origin story.


At the time of writing this post, I only now found out that official lyric videos are a thing. I guess they figured that if enough people were making them, then they might as well do it themselves. There’s also at least two other semi-official music videos for this song as well. One is a remix and the other was constructed using concert footage. I’m not doing those ones.

If you’ve only seen the version of this where they used marketing most people are familiar with as an analogy, then this one is worth your time. It isn’t really a lyric video in the traditional sense, but one that gets to the point while also throwing in some lyrics here and there. Just like that other version, this one is also worth downloading and looking at carefully. They did a good job filling it with all kinds of subtle details to go along with the obvious stuff.

The thing I like best about this music video is that while I still find that it unnecessarily breeds paranoia and is counterproductive, it doesn’t feel patronizing like the other one. It relies on you using your brain and looking deeper into things that aren’t obfuscated by bashing heads, gay for pay, and other nonsense.

One example is that they go through several artists to show that they register on the Google Knowledge Graph until they reach White Sea, which results in a Wikipedia entry. They then cut to White Sea having a Twitter page and Joywave, that showed up in the Knowledge Graph, having a Facebook Page. The obvious part is that the Google Knowledge Graph pulls together all kinds of information including birthdates into a central location. The more subtle part, that is quickly glossed over by the runtime, is that it implies that the Knowledge Graph places more weight on an artist having a Facebook page than a Twitter page. It also reaches back to the overarching idea that “Big Data” is useful for predictive algorithms that allow things like autocomplete and targeted advertising.

Another example is that the video actually takes place over several days. They don’t really draw attention to it either. If you just watch the upper right hand corner throughout the video, then you’ll notice the different times, the changing battery levels, and other things up there.

At the end of the day, I am obligated to like this as an EECS major because it is probably the only music video I will ever see that has the kmalloc function in it. It is in one of the lines of code that pops up when they go to hackertyper.net.

The posting on YouTube tells me that this music video was directed by SCANTRON and Greg Yagolnitzer. SCANTRON has done numerous music videos, including several for Weezer. I am assuming it is a pseudonym, or a name used by different directors who work for Scantron Films. I can only find a couple of animation credits for Yagolnitzer on IMDb, but a quick Google search turns up a few other music video credits.