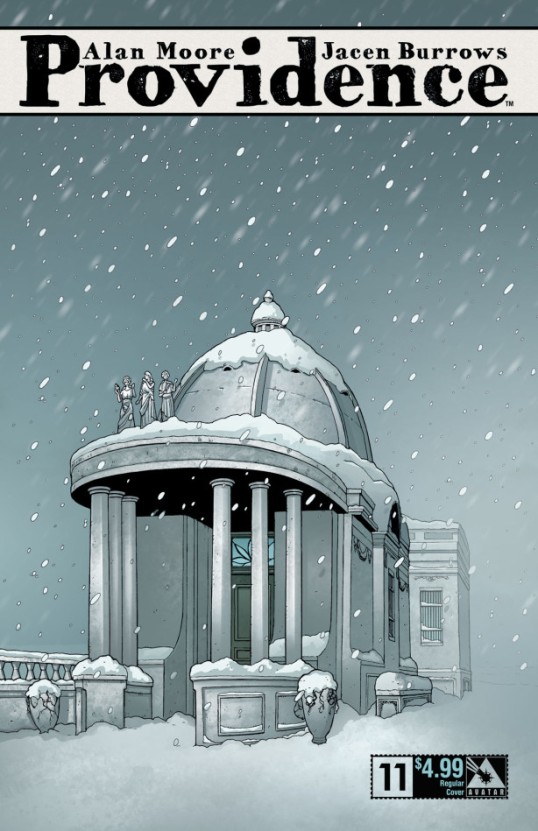 Upon first pass-through, you could almost be forgiven, a few pages into Providence #11, for thinking that you must have missed an issue somewhere along the way. Not just because of the massive delay between the previous installment and this current one (though that certainly didn’t help matters), but because the tone, tenor, and most crucially the tempo of everything have so clearly changed, and so quickly. Gone is the comic that spent most of its time showing our protagonist either taking long walks or having deep, philosophical conversations while all the genuine horror taking place both around and, crucially, to him escaped his notice, and in its place stands a story about a man who is fully awake, fully aware, and understandably scared to death — and when the dam of blissful denial breaks, all bets are off as surely as the brakes are on this frenetically-paced, deliberately- whiplash-inducing…

I’m assuming that anyone with an internet connection is at least familiar in passing with the urban legend of the “Black Eyed Children,” but just in case you’re not, here’s a brief recap of the phenomenon : pale and creepy-looking kids with retina-free eyes whose color can best be described as falling somewhere between “onyx” and “obsidian” show up unannounced on peoples’ front doors and/or porches and ask, in “vampire rules” fashion, to be let in. Sometimes they provide a pretext (“I’m hungry,” “I’m cold,” etc.), sometimes not, but whatever the case, if you do let ’em in you’ll probably regret it. Often they don’t appear to do much more than creep people out and overstay their welcome, but sometimes they’ve been known to go so far as to kill folks, so hey — why take the chance? Apparently these sightings go back decades, perhaps even centuries, and while no…

(Lisa recently discovered that she only had about 8 hours of space left on her DVR!  It turns out that she’s been recording movies from July and she just hasn’t gotten around to watching and reviewing them yet.  So, once again, Lisa is cleaning out her DVR!  She is going to try to watch and review 52 movies by the end of 2017!  Will she make it?  Keep checking the site to find out!)

I recorded Melinda off of TCM on November 13th.

First released in 1972, Melinda is technically a murder mystery.  Frankie J. Parker (Calvin Lockhart, giving a brilliant performance) is a popular radio DJ in Los Angeles.  When we first see Frankie, he’s driving his expensive sportscar through a poor neighborhood.  It’s a neighborhood that he knows well but, as opposed to those around him, he’s made it out.  He’s handsome, slick, and more than a little arrogant.  When he arrives at a local gym, he looks at himself in a mirror and says, “I shouldn’t say it … but I am a pretty motherfucker.”  Frankie’s a student in a taekwondo class taught by Charles Atkins (Jim Kelly).  Charles gives Frankie a hard time about not giving back to the community.  Frankie blows off his concerns.  To be honest, we really should dislike Frankie but he’s so damn charming.  As played by Calvin Lockhart, Frankie has one of those irresistible smirks, the type of the lights up the screen.

One night, Frankie meets the mysterious Melinda (Vonetta McGee) and spends the night with her.  He thinks that it’s just going to be another one night stand but Melinda tells Frankie that he has the potential to be more than he realizes.  Touched, Frankie goes to work and resolves to be a better person.  Then he returns home and discovers that Melinda has been murdered!

The rest of the film deals with Frankie’s attempts to discover who murdered Melinda.  It turns out that Melinda had underworld connections and mob boss Mitch (Paul Stevens) is desperate to recover something that Melinda had in her possession when she died.  But honestly, the whole murder subplot is a MacGuffin (if you want to get all Hitchcockian about it).  Ultimately, Melinda is a character study of Frankie Parker and how, over the course of solving Melinda’s murder, he learns that there’s more to life than just looking out for himself.

Though Melinda was obviously made to capitalize on the blaxploitation craze of the early 70s, it’s actually far more low-key than most of the better known films in the genre.  (Or, at least it is until the karate-filled finale.)  Perhaps because it was directed by a black man and written by noted black playwright Lonne Elder III, Melinda is far more interested in exploring what makes its characters who they are, as opposed to just putting a gun in their hand and having them shoot up the screen.  Frankie Parker emerges as a fascinating character.

Mention should also be made of the performance of Rosalind Cash, who plays Terry, Frankie’s ex.  Cash gets an absolutely amazing scene where, while attempting to convince a bank employee that she’s Melinda so that she can get into Melinda’s safe deposit box, she tells off a rude teller.  It’s such a good scene and Cash delivers her lines with such fury that you find yourself forgetting that the teller was actually correct in her suspicion that Terry wasn’t actually who she said she was.

Melinda is probably one of the best films that hardly anyone has ever heard of.  Keep an eye out for it.

Today is the 100th birthday of movie legend Kirk Douglas! Like Olivia de Havilland earlier this year, Kirk is one of the last living Golden Age greats. Bursting onto the screen in film noir classics like THE STRANGE LOVES OF MARTHA IVERS and OUT OF THE PAST , he first received top billing in the 1949 boxing noir CHAMPION, earning an Oscar nomination for his performance. Later, Kirk starred in some of the best films Hollywood has to offer: ACE IN THE HOLE, 20,000 LEAGUES UNDER THE SEA , LUST FOR LIFE (his second Oscar nom, though he never won the statue), PATHS OF GLORY, SPARTACUS, LONELY ARE THE BRAVE. One of my personal favorites is 1952’s THE BAD AND THE BEAUTIFUL.

One of those Hollywood movies about making Hollywood movies, THE BAD AND THE BEAUTIFUL is expertly directed by insider Vincent Minnelli, who knew this material like the back of his hand. Aided…


Since yesterday’s music video turned out to be an epic write for me, I decided to go with something fun for today.

Before Chris Hemsworth and even Eric Allan Kramer, there was Jon Miki Thor. I am going with 1983 since that was the year their album Unchained came out. Thor has an interesting history that you can read over on Wikipedia. The gist is that he was a body-builder who went into music, and then started being in movies such as Rock ‘n’ Roll Nightmare (1987). He even got his own documentary in 2015 called I Am Thor.

I enjoy the song despite what some people might say about it. I think the producer of the music video, who apparently put it up on YouTube, is giving himself too much flack. Dio would do the same kind of thing with a magic ball for Rock and Roll Children in 1985. Then there is the music video for Van Halen’s (Oh) Pretty Woman. I’ll get to that one eventually, but I will say that among other things, it has Michael Anthony as a samurai. You had Josie Cotton asking Johnny if he was queer while he squirmed on a bench that was followed up by Julie Brown’s The Homecoming Queen’s Got A Gun that showed us a school shooting done in the name of Johnny (I have to assume they are the same Johnny). There’s also Italian disco singer Moon Ray dancing like she is an Indian while she appears to be inside of the Atari game Custer’s Revenge for her song Comanchero. Finally, I think Chainmale might take offense at this music video being called the worst ever made.

I’m just saying that it wasn’t out of place in its time. It has significance to me today because I will now be paying close attention to the dialog in Marvel movies as a result of watching it. I want to hear Iron Man ask Thor if “Anger” is his middle name.

If it is still up, here’s Thor bending a steel bar with his teeth. 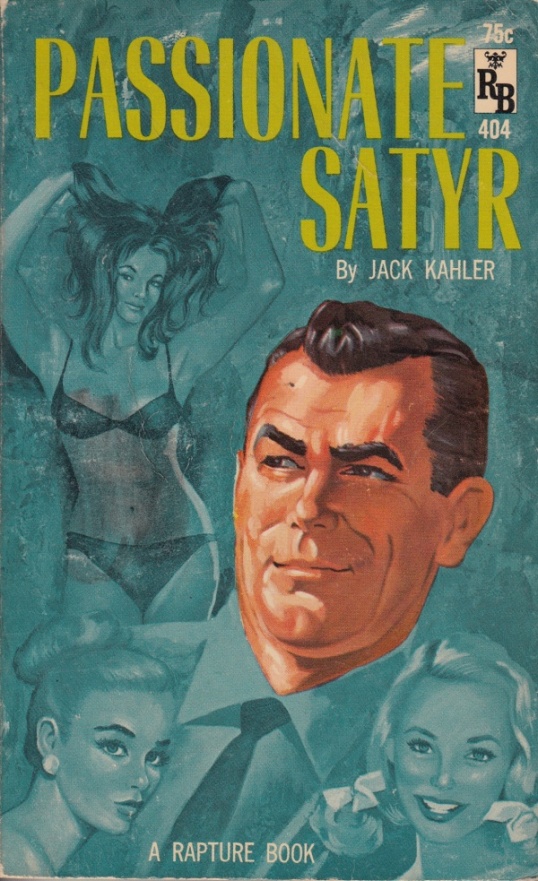