(Lisa recently discovered that she only has about 8 hours of space left on her DVR!  It turns out that she’s been recording movies from July and she just hasn’t gotten around to watching and reviewing them yet.  So, once again, Lisa is cleaning out her DVR!  She is going to try to watch and review 52 movies by the end of Wednesday, December 7th!  Will she make it?  Keep checking the site to find out!) 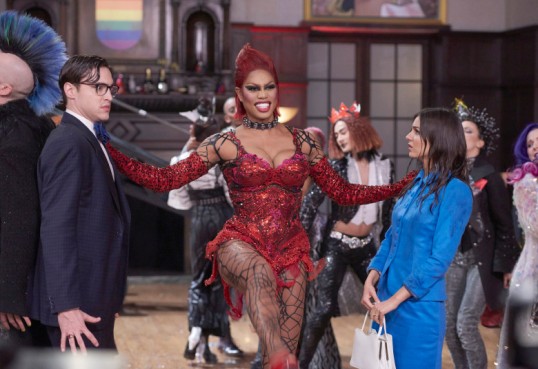 I’ve actually come across some debate online whether the Fox version of The Rocky Horror Picture Show should be considered a remake or merely a tribute to the original film.  It really doesn’t matter.  Whether it’s a tribute or a remake, it’s way too bland to succeed as either one.  Regardless of whether you think the original film (or the original stage play, for that matter) is a transgressive mindfuck or an overrated slog, you can’t deny that director Jim Sharman, star Tim Curry, and writer Richard O’Brien fully committed themselves to being subversive and challenging the audience.  The Fox version was directed by Kenny Ortega, who is best known for the High School Musical films.  Ultimately, this version feels so safe and bland that you could easily imagine Brad and Janet watching it while on church retreat.

As for the cast, I thought Victoria Justice did a pretty good job as Janet, though it’s impossible for me to see her without singing that Best Friend’s Brother song that TeenNick always used to play in between episodes of Degrassi.  Reeve Carney did an acceptable Richard O’Brien impersonation as Riff-Raff.

Laverne Cox took on the role of Dr. Frank-n-Furter and somehow, she managed to make that role boring.  You know who would have made a great Frank-n-Furter?  Adam Lambert.  But he was stuck playing Eddie, the delivery boy who gets eaten.  Lambert did a pretty good job as Eddie but let’s be honest — ANYONE WHO CAN SING CAN PLAY EDDIE!  Frank-n-Furter, on the other hand, is a dynamic character and, for a production of Rocky Horror to work, Frank has to dominate the entire show.  Far too often, Cox seemed to blend into the background.

As for the original Frank, Tim Curry showed up as the Criminologist.  Curry had a stroke in 2012 and now uses a wheelchair.  Here’s hoping the best for him!

As for this version of Rocky Horror, it will soon be forgotten.  Actually, it probably already is forgotten.  I had forgotten about it until I saw it on the DVR.  As opposed to some of the other made-for-TV musicals that have recently aired — Sound of Music, Grease — this version of Rocky Horror was not aired live.  To be honest, I think it would have been better if it had been a live production.  At the least, it would have brought an air of potential danger, the thought that anything could happen, to the production.

That’s what this version was missing.

(Lisa recently discovered that she only has about 8 hours of space left on her DVR!  It turns out that she’s been recording movies from July and she just hasn’t gotten around to watching and reviewing them yet.  So, once again, Lisa is cleaning out her DVR!  She is going to try to watch and review 52 movies by the end of Wednesday, December 7th!  Will she make it?  Keep checking the site to find out!) 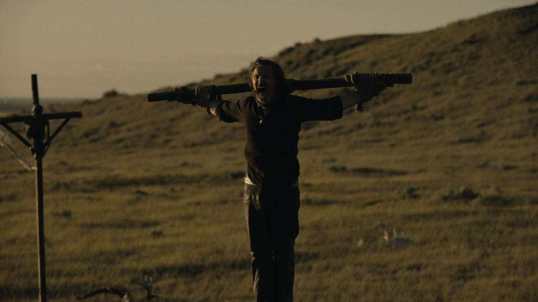 Stake Land 2: The Stakelander premiered on the SyFy network on October 15th.  Normally, I watch and live tweet any and all SyFy premieres but I was actually on vacation when Stake Land 2 premiered.  So, I recorded it!

And now, I’ve watched it.

Well, this is kind of a strange one.  I have to admit that I’m a little bit shocked that this one premiered on SyFy without even getting a limited theatrical release.  (I mean, Hell, even 400 Days played in theaters for a week!)  After all, Stake Land 2 is a direct sequel to Stake Land, which did get a theatrical release back in 2010 along with positive reviews and a strong cult following.

In fact, not only is Stake Land 2 a direct sequel but it also features the return of almost the entire cast and the original screenwriter.  Original director Jim Mickle — who went from Stake Land to Cold In July — does not return but he is on board as an executive producer.  Though the film’s budget was low, it’s still obvious that the production cost a bit more than the typical SyFy mockbuster.  So, I’m a bit curious how Stake Land 2 ended up making its debut on SyFy.

Well, regardless of how it got there, Stake Land 2 premiered as a part of SyFy’s 31 Days Of Halloween.  One of the advantages of Stake Land 2 being a sequel to another fairly well-known film is that it was one of the few SyFy October premieres that did not play out as a rip-off of It Follows.  Instead, it felt like a rip-off of The Walking Dead, except with vampires instead of zombies.

The film picks up where the original Stake Land ended.  Martin (Connor Paolo) and his wife have set up a perfect life in New Eden but it’s all shattered when they’re attacked by a band of vampires that’s led by The Mother (Kristina Hughes).  Seeking revenge, Martin returns to the Badlands of America and searches for his mentor from the previous film, Mister (Nick Damici).  Mister is older and wearier now and he’s haunted by nightmares.  But he and Martin can still kill vampires!

Anyway, the majority of the film is a lengthy road film.  In fact, it’s a bit too lengthy.  This is one of those films that covers for a thin plot by supplying a lot of filler.  There’s a kind of fun scene set in an underground, Mad Max-style fight club and, along the way, Mister and Martin picks up some properly quirky allies.  There’s a few good shots of the desolate landscape and The Mother is genuinely menacing.

But, especially when compared to the first film, Stake Land 2 is ultimately way too predictable and more than a little bland.  Whereas the first Stake Land managed to create its own universe, one that you were actually curious about, Stake Land 2 is just another forgettable sequel. 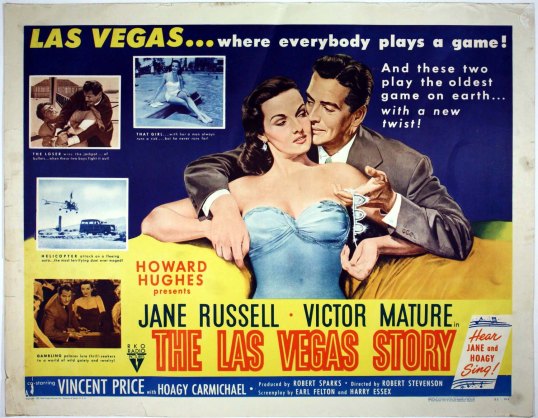 Jane Russell’s  sexy as always, but THE LAS VEGAS STORY falls flatter than the proverbial pancake. This dull little crime drama boasts a good cast and some good moments, but on the whole doesn’t satisfy. One of the problems is Jane’s co-star Victor Mature, who tries but can’t match the cynicism frequent Russell co-star Robert Mitchum would’ve brought to the role of Jane’s jilted ex-lover, now a cop in the City of Sin. The most interesting thing about THE LAS VEGAS STORY is it’s screenplay credits, which we’ll get to later. 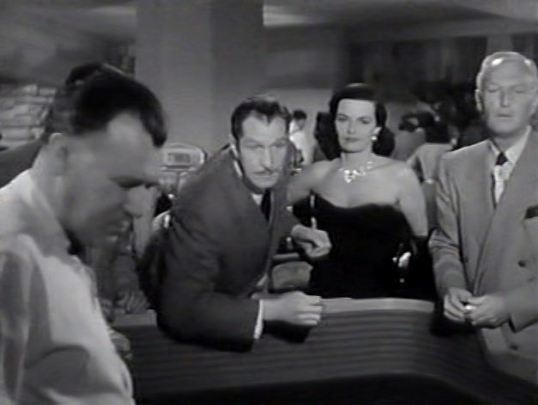 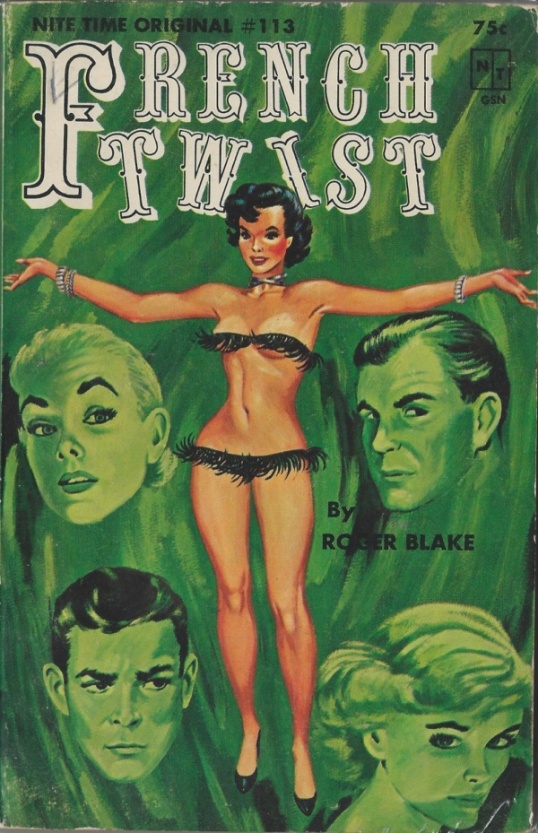 
I hate when I have to do this, but yes, the music video is there. Apparently what is arguably the most well-known music video by The Go-Go’s is otherwise not on YouTube.

Anyways, seeing as this video is really known for one thing and one thing only, I will let Jane Wiedlin explain shooting that part. Here it is from the book I Want My MTV:

“We’d already had a number one album and we were seasoned rock stars by the time our second album came out. There was a big budget to make ‘Vacation’–$50,000 or something. We still saw videos as an annoying waste of time. After seven or eight hours we sent somebody out to sneak in booze. When I look at that video now and see the parts we filmed at the end of the day–we’re smiling and waving our hands, but if you look at our eyes, we’re all so drunk. We didn’t try to make it look like we were really water-skiing.”

The music video was directed by Mick Haggerty & C.D. Taylor who mostly stuck with Hall & Oates music videos. Yes, that does include the ridiculous video for Jingle Bell Rock.