So, it’s that time of year!  2015 is nearly over and soon, it will be time for me to make out my best-of and worst-of lists.  That means that now is the time that I look over all the films that I have watched up to this point, I realize how many of those films I have yet to review ,and I think, “Oh my God, how did I get this far behind?”

So, here are 6 capsule reviews, designed to help me get caught up! 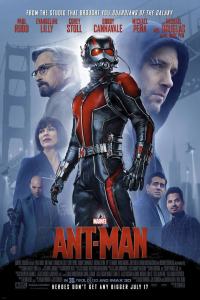 Ant-Man has already been reviewed twice on this site, once by Leonard Wilson and once by Ryan The Trashfilm Guru.  Leonard liked it.  Ryan did not.  As for me, my reaction was somewhere in between.  I enjoyed Ant-Man, though not as much as I’ve enjoyed some of the previous Marvel films.  Ant-Man was better than the second Thor film but nowhere close to being as good as Captain America: Winter Soldier.

What I did like about Ant-Man were the performances of Paul Rudd, Evangeline Lilly, and Michael Pena.  I even enjoyed Michael Douglas’s performance, which is saying something when you consider the fact that, as of late, Michael Douglas has really been making my skin crawl.  I also thought that the film did a good job creating Ant-Man’s microscopic world, even if I’m still not totally sold on the character as a dynamic hero.  I do wish that the film had a stronger villain.  Corey Stoll is such a good actor and capable of doing so much and it was hard not to regret that he was stuck playing such a generic bad guy.

Oh, how I loved Cinderella!  The film, a live-action retelling of the Cinderella story, was a gorgeous fairy tale and a wonderful reminder that a film doesn’t have to be dark and depressing to be good.  (In many ways, Cinderella serves as an antidote to not only Into The Woods, but countless Tim Burton films as well.)  Lily James is beautiful in the title role, Richard Madden is wonderfully charming as the prince, and Cate Blanchett and Helena Bonham Carter are perfectly cast as the stepmother and the fairy godmother.

Jurassic World was previously reviewed by Ryan the Trashfilm Guru.  I hate to admit it but I was, initially, one of those people who watched Jurassic World and got annoyed because the film was predictable and the script was a bit clunky.  Traditionally (and, if you doubt me, just read my review of Avatar), it bothers me when a film devotes so much time special effects that it can’t seem to be bothered with character development and clever dialogue.

But then I thought about it somewhat and I thought to myself, you know what?  This movie had Chris Pratt and it had some very convincing dinosaurs!  And, especially when it comes to a summer blockbuster, that is sometimes all you need.

(Why I enjoyed Jurassic World while disliking Avatar largely comes down to the difference between Chris Pratt and Sam Worthington.)

Oddly enough, I had the roughly the same reaction to Magic Mike XXL that I had to Jurassic World.  Yes, there are certain things — mostly concerning the film’s script — about which I could nitpick but what’s truly important is that Channing Tatum, Joe Manganiello, and most of the original cast of Magic Mike is back and they’re stripping again.  Magic Mike XXL is a huge (heh heh) crowd pleaser, a film that delivers exactly what it promises.

Though Steven Soderbergh served as cinematographer for Magic Mike XXL, he did not return to serve as director and perhaps that’s why Magic Mike XXL feels like a far less pretentious film than the first Magic Mike.  Out of the original cast, both Matthew McConaughey and Alex Pettyfer both declined to appear in the sequel.  McConaughey is missed, Pettyfer less so.

The Man From UNCLE (dir by Guy Ritchie)

The Man From Uncle is one of the many stylish spy films to be released this year.  Henry Cavill is an American spy, Armie Hammer is a Russian spy, and Hugh Grant is the Englishman who tells them both what to do.  The Man From Uncle was entertaining.  It took place in the 60s, so there was a lot of wonderful retro fashion and the whole movie moved at a nice, breezy pace.  Ultimately — and I’ll be the first to admit that this isn’t exactly fair — The Man From UNCLE suffered because it was released in the same year as Kingsman and Mission Impossible: Rogue Nation.  Man From UNCLE was entertaining but rather generic.  At no point did it reach the lunatic high of Kingsman’s Free Bird sequence.

But you know what?  If you just sit back and relax and try not to think about the film too much — if you just accept it as an action film and watch for the stunts and the explosions — Terminator: Genisys is not the disaster that many critics made it out to be.  I mean, let’s just be honest here.  Most critics would die before they gave a good review to any film featuring Arnold Schwarzenegger.  (Just check out all the negativity that greeted the brilliant zombie film, Maggie.)  After all, Schwarzenegger is an outspoken, confident, cheerfully arrogant Republican and most film critics can only relate to the arrogant part.  (And even then, they don’t ever seem to be very cheerful about it…)  Terminator: Genisys is a well-made and perfectly adequate action film, one that works as long as you don’t spend too much time dwelling on it.  It’s cinematic junk food and there’s nothing wrong with that.