Tonight, I watched the first Lifetime movie of 2020 — Escaping My Stalker! 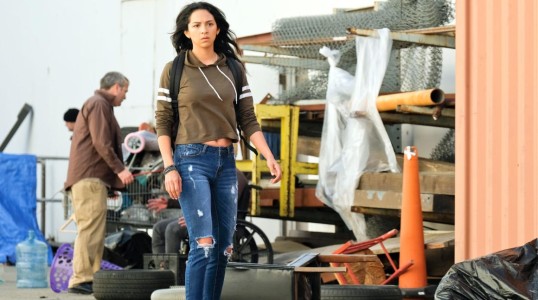 Because it was the first Lifetime film of 2020, of course!

Seriously, though, 2019 was not an easy year for me as a reviewer.  I got busy.  My time management skills mysteriously fell apart.  As a result, I missed a few Lifetime films and I also didn’t always have time to review quite a few of the ones that I did see.  One of my resolutions for 2020 is to not let that happen again.

I mean, don’t get me wrong.  If I’m not going to be at home when the movie airs, I’m going to set the DVR.  But, this year, I’m not going to let movies pile up on my DVR before I watch them and, even more importantly, I’m not going to get behind on my reviews.  That’s my 2020 resolution and if I break it, I’m blaming everyone who follows me on social media.

Those are the stakes, my friends.

(For the record, I will be watching and hopefully reviewing the remaining Lifetime films on my DVR this weekend.)

Up until a year ago, 17 year-old Taylor (Ezmie Garcia) was homeless.  Fortunately, she was eventually taken in and adopted by Larry (Linden Ashby) and his wife, Sandy (Alexandra Paul).  Now, Taylor has a job at the local skatepark and her life appears to be heading in the right direction.  However, Taylor also has a stalker!  When that stalker breaks into Taylor’s home and shoots Larry in the leg, Taylor realizes that her new life isn’t as secure as she thought it was.

It’s no spoiler to tell you that Taylor’s stalker is Miles (Andrew James Allen).  Miles lives with his grandmother (Mariette Hartley) and it quickly turns out that grandma is actually encouraging Miles!  Miles and grandma have got their own reasons for wanting to destroy Taylor’s new family, reasons that only become clear as the film progresses.

Seriously, Escaping My Stalker was a perfect way to start the new year.  The story was interesting.  The film was well-directed by Linden Ashby.  Ezmie Garcia did a great job playing a character who was a bit tougher than the average Lifetime teenager.  Meanwhile, Mariette Hartley appeared to be having a lot of diabolical fun in the role of the Grandma from Hell.  Even though Miles was not necessarily a sympathetic character, it only took one look at Grandma to understand why Miles turned out the way that he did.

Also, Escaping My Stalker featured a Clu Gulager shout-out!  When Taylor first meets Clu Dunsten (Pedro Correa), she asks him if he’s named after the great character actor Clu Gulager.  They even spend a few minutes talking about Return of the Living Dead!  If that isn’t the best way to start off 2020, I don’t know what is.

Finally, this was not just a Lifetime melodrama.  It was also a film about the homeless situation, which is getting worse day-by-day (and not just on the West Coast, either).  This was a Lifetime film with a conscience.

As I said, it all worked.  This was exactly the type of film that one hopes to see while watching the Lifetime Movie Network.

To be honest, I could only hope to be as tough and resourceful as Taylor.

There are still people out there who appreciate a good Living Dead film. 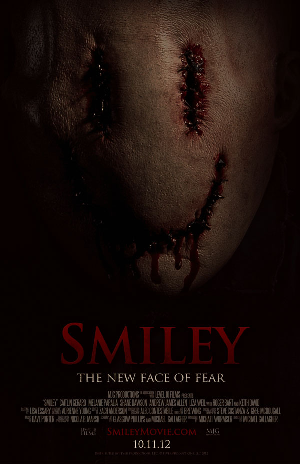 Whenever I watch 2012’s Smiley (and, since this is one of those films that always seems to be playing whenever I have insomnia, I actually have seen Smiley more times than I should probably admit), I always find myself hoping that it will actually be a better film than I remember it being.

Some of that, I have to admit, is because I once dated a frat boy whose nickname was Smiley.  His high school football coach gave him that name because he was always smiling!  (Yes, I once dated a football player who smiled a lot and didn’t really care much about literature, art, movies, history, or anything else that I was actually interested in. Don’t ask me to explain how these things happen.)  His pickup truck even had a personalized licence plate that read, “SMILY.”  That’s right — he wasn’t really sure how to spell Smiley.  Whenever I see the title Smiley listed in the guide, I think of him and I have to kind of laugh.

Beyond that, Smiley was an independent, low-budget film and I have to admit that my natural inclination is always to support independent filmmakers.  If Smiley was a huge studio production, I’d have absolutely no qualms about ripping it apart.  But when I see an indie horror film like Smiley, there’s a part of me that almost feels that I have to be supportive.  But the things is, it’s one thing to be supportive and it’s another thing to be delusional.  I may want Smiley to be a good horror film but it’s not and I’m really not doing anyone any good if I pretend otherwise.

Finally, I always want Smiley to be better than it actually is because the film features one of the creepiest killers that I’ve ever seen.  Even if the character is cheapened by a rather stupid twist, Smiley is scary looking.  Smiley is presented as being the spirit of a man who, after stitching his own eyes closed, carved a permanent smile on his face.  As a force of evil, Smiley is genuinely frightening and it’s unfortunate that the rest of the film doesn’t live up to the character’s potential.

As for the rest of the film … well, it’s pretty much your typical slasher.  All of the characters are loathsome, the murders are neither suspenseful nor gory enough to really be memorable, and this is one of those films that relies far too much on scenes of people running into someone, screaming in terror, and then discovering that it was just one of their friends.  It is true that there is a twist towards the end of the film that’s designed to make you question everything that you’ve just see but since the twist doesn’t make much sense and comes out of nowhere, it’s hard to get excited about it.  The best thing the film had going for it was the character of Smiley and the twist pretty much ruins that.

(The film’s other big twist is that the cast is full of YouTube personalities, which makes Smiley the spiritual descendant of The Scorned, a similarly bad slasher film that was full of reality TV stars.)

By the way, the idea behind Smiley is that you can go on Chatroulette and, if you type “I did it for the lulz” three times, Smiley will appear and kill whoever your chatting with.  Just for the record, I’ve tried it and it doesn’t work.*

* Well, to be honest, I got a friend of mine to try it and it didn’t work.  I’ve got better things to do then watch some guy jerking off on Chatroulette.