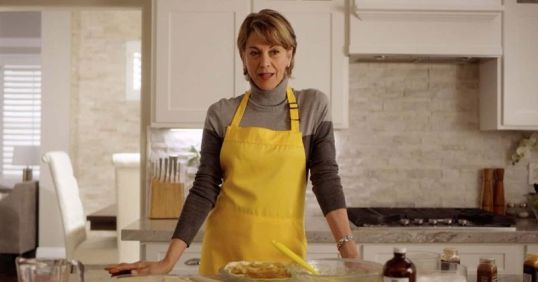 Over the course of the last few years, Lifetime has been showing a lot of movies about psychotic grandmothers.

These movies usually follow the same pattern.  A woman, who is either divorced or widowed and who has at least two young children, meets a handsome man who doesn’t like to talk about his past.  After a whirlwind courtship, they get married.  Though it’s a struggle at first, the new blended family finally starts to come together.  Suddenly, the doorbell rings and …. IT’S GRANNY!

Where has grandma been?  Sometimes, she’s been in a mental hospital.  Sometimes, she’s been in jail.  Sometimes, she’s recently escaped from a retirement community.  The important thing is that she’s back and she’s suddenly ready to be a part of the family.  The kids lover her and her daughter-in-law feels threatened.  Everyone tells the new wife that she’s being paranoid and that grandma might be a little eccentric but she’s harmless.  However, the viewers know that the grandma is actually a psycho because we’ve seen her murder at least two people by the fourth commercial break.

The appeal of these films is pretty easy to understand.  It comes down to two things.

Number one, like many Lifetime films, it features a very universal fear at the heart of its melodrama.  Every parent worries about how they’re going to live up to (or, in some case, improve upon) the example of the grandparents.  Kids tend to love their grandparents, largely because they provide an escape from having to deal with mom and dad and all of their hangups about going to bed on time, not watching too much TV, and doing their homework.  The grandparents get all of the good parts of parenting without any of the bad parts, or so it seems.  Even more importantly, there’s always the fear that grandma is silently judging everything that her daughter-in-law is doing.  This is something that almost everyone can relate to.

Number two, these films always manage to find the best actresses to play grandma.  Usually, these are actresses who, because Hollywood is a terrible place, no longer seem to get the type of roles that they deserve.  In the tradition of Joan Crawford and Bette Davis in almost every film they made after Whatever Happened To Baby Jane?, these actresses usually give wonderfully over-the-top performances as the psycho grandma.

Wendie Malick is the latest actress to star as one of Lifetime’s psycho grandmas.  In Deranged Granny, she plays Barbara.  Barbara never really recovered from the death of her son’s first wife and her grandchild.  Now that Ethan (Josh Ventura) has remarried and has two stepchildren, Barbara is determined to be a part of their lives.  Unfortunately, Barbara’s new daughter-in-law, Kendall (Amanda Righetti), comes to feel that Barbara is trying to push her out of her family’s life.  Is Kendall being paranoid or is she correct in her suspicion that the main reason that Barbara is always cooking is because she’s obsessed with poisoning people?  You can probably guess the answer to that question by the fact that the movie is called Deranged Granny and not Deranged Daughter-in-Law.

Not surprisingly, the main reason to watch Deranged Granny is for the performance of Wendie Malick.  That we usually tend to associate Malick with comedic roles only makes it all the more effective when she suddenly starts poisoning everyone who looks at her the wrong way.  Even when she’s not specifically trying to kill people, Malick delivers all of her faux friendly lines with just the perfect amount of passive aggressive condescension.  What I especially liked about the film is that Barbara seemed to be having a lot of fun with her evil schemes.  She may have been the granny from Hell but she still came across like she would be the fun grandma as well.  Just don’t eat her cookies, especially if you have a food allergy.

Disgruntled Granny was a fun deranged grandma film.  Watch it the next time you feel like you’re being silently judged.